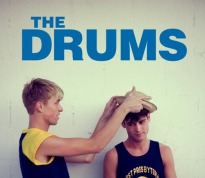 An interview with NYC "pessimist pop" band The Drums, who play The Mod Club on October 16th

Usually the subject of an obstructed view, but the provider of the beat and booming sound, the drums are a quintessential element of rock and pop, and the instrument that provides the name for New York City band The Drums.

The Drums are one of 2010’s most buzzed about bands, initially catching popularity in the U.K. with the indie label Moshi Moshi releasing their 2009 EP Summertime! Like prior American bands (Kings of Leon, The Gossip) that first solidified their success in the U.K., The Drums are back on North American soil completing a thirty-date tour with Surfer Blood. “It’s our first U.S. tour and we feel like it’s long over due,” says singer and songwriter Jonathan Pierce. “We’ve been touring the world now for about two years and everything but North America, so it’s really good to be on the road.”

Formed in late 2006 by childhood friends Jonathan Pierce and guitarist Jacob Graham in Florida, The Drums are a product of broken bands. Pierce and Graham both used to be in Goat Explosion, before Pierce and former guitarist Adam Kessler formed the New York City based electro-pop band Elkland, while Graham was in Horse Shoes. With the break up of Elkland, Pierce left for Florida where Graham was based, and the two began writing and recording music. After putting the songs online, within six months they moved back to New York City, signed a record deal, and added the final member of The Drums, ironically enough, drummer Connor Hanwick.

When asked if Florida inspired the “sunshine sound” The Drums are associated with, Pierce was quick to dismiss it. “It wasn’t so much our surroundings as it was our reality,” he explains. “The realities of our lives sort of changing.”

Their self-titled debut, released in June, was self-produced and arranged in chronological order of being written. “The first song that we wrote was ‘Best Friend’ and the last song we wrote was ‘The Future,’” Pierce says, pointing out that a change occurs right in the middle of the twelve-song album. “When we moved back to New York, the reality of our new lives set in and that’s why the songs became darker on the second half of the album.”

The happy melody layered with grim lyrics makes you feel a bit guilty when you realize you are dancing and tapping your feet to songs about a dead friend and murderous lover for “Best Friend” and “Skippin’ Town.” The classic 60s to 80s vibe in the sound is stamped all over the album with contagious whistling and crooning “darlings.” “When I found bands like The Smiths and Orange Juice, they had an uplifting sound but pretty gloomy lyrics,” Pierce expands on their influences. “For the first time in my life I realized there are other people like me who are lonely and to me that was comforting.”

Suddenly in demand and constantly surrounded by people, the band welcomes the success, comparisons and labels. Dubbed “pessimistic pop” by some music journalists, Pierce ponders the label for a moment before declaring “I don’t know if pessimistic is the right word, but it’s close.”

The revival of the classic pop band sound from the ‘60s is seen with the success of other bands like Dum Dum Girls. As the chief songwriter of the group, Pierce explains that not all pop songs have to have an upbeat tempo: “One of my favourite songs is ‘I Will Always Love You’ by Dolly Parton and that’s slowed down. I don’t think it matters whether you dance or not, I think a great pop song helps you escape from your normal life. It transforms you into a different person for those three minutes.”

Taking an extremely hands on approach to their music, The Drums have extended their efforts to collaborate with Edwyn Collins and Mark Ronson & The Business International on their new albums. And when they are not recording music, they are directing their own music videos in a period when most bands avoid even appearing in them. Currently editing “Me and the Moon” while on the road, exactly how important is the visual to the band? “Probably more important than the music,” Pierce laughs. “I know that sounds blasphemous, but to us, imagery is our greatest inspiration.” With five music videos already, Pierce compares each song to having an accompanying photograph with the music video acting as an extension to the song.

The control of the aesthetic extends into their live shows, too. Applauded for their performances, The Drums make an effort to entertain the crowd. “We’ve been going to shows for years and I feel like our show is a reaction to being bored out of our minds,” Pierce says. “You listen to an album and you love it, then you for to show excited and a lot of times a band is just standing there playing these songs,” he continues. “There is a certain duty of entertaining.” The old school classic pop showmanship is inspired by the Shangri-Las and The Ramones.

The live show took a surprise turn with the September 16th announcement of guitarist Adam Kessler leaving the band mid-tour. “We’ve had the feeling for awhile that he was sort of swimming in a different direction and we’ve had to yank him back in the direction the rest of us were swimming in,” Pierce explains. “About two hours after he had left we all sort of realized it was a good thing,” he expands. “Because instantly all these ideas started flooding in; ideas for the new album, ideas for the live show and it was an inspirational thing that happened to us.” The band plans to move forward as a three-piece, but are currently joined on tour with a friend on guitar.

While on tour, The Drums have recorded two new songs for their upcoming album with no set release date. Pierce describes the songs as some of the bands’ best and will head in the direction of “Book of Stories” from their debut. And the beat of The Drums continues…

Gotta Get With My Friends: A Valentine’s Spice Girls Party

Baregyal at Caribana: Official Celebration of Women of Colour