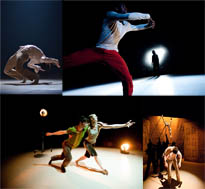 Crystal Pite's Dark Matters, on now at Bluma Appel Theatre, is a must-see for dance fans

“BRAVO!” boomed an old man behind us, among hoots and hollers, to the crescendo of cacophony that ends the first act of celebrated choreographer Crystal Pite’s Dark Matters. “You were crying, weren’t you?” Girls asked each other in the bathroom. “OF COURSE I was crying!” This unconventional dance performance, which features two very distinct acts, combines stripped-down sets, puppetry, theatrics, original music, and a haunting recitation of Voltaire into a show that manages to be ominous, funny, and intriguing all at the same time. You will be stunned at the humour and menace the performers create, using only their bodies, and the emotion summoned onstage between dancers with minimal costuming, set, and music. One memorable piece features the dancers, mic’d so you can hear their every breath, moving to sporadic crashes of thunder on a bare stage.

The opening piece features a vignette about a man who is destroyed by his own creation, a wooden puppet. The dance-combat between Juillard School alum Peter Chu and the puppet, manned by the rest of the company wearing body-concealing black suits, is hilarious, but pendulums quickly to darker stuff: this balance between light and dark is part of what makes Pite’s piece so raw and moving.

The second act goes in an entirely different direction. The dancers are now human, stripped of their black costumes, and perform to ambient sounds or otherworldly music, their movement creating vivid intensity on the bare stage. The contrast between the two acts, and the subtle ways in which Pite ties them together, make this show all the more intriguing.

Dark Matters is on at the Bluma Appel Theatre at the St. Lawrence Centre for the Performing Arts until March 3rd. For showtimes and tickets, click here.

Constellations Is the Love Story Sexy Nerds Have Been Waiting For

Perfect Date Night: Use SDTC Promo Code To Score up to $40 Per Ticket in Savings on Broadway Hit Constellations