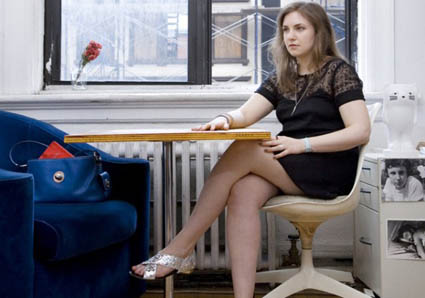 Girls, an honest portrayal of the Urban 20-Something, is Larry David meets My So-Called Life

When you’re a young urban twenty-something, your ideal situation and your actual situation are almost guaranteed to have some differences. Believe it or not, at 24 you’ve still got a ways to go until you make it as a high powered exec, (or lawyer, or movie star.) You may have thought you’d spend every weekend at a Gala opening, wearing designer stilettos and sipping on cocktails with your glamorous friends.

If you’re anything like me, however, you’re more likely to spend every Friday watching the musical episode of Buffy and reruns of 30 Rock in a cramped apartment wearing your “comfy” sweats.

In all honesty, as ambitious young post-grads, our lives are usually as close to the Sex and The City lifestyle as they are to the 19 Kids and Counting lifestyle. That is to say, a world apart.

This week I was lucky enough to catch an early screening of HBO’s new show Girls. (Full disclosure, I’m a huge Lena fan, and had high hopes for this new pilot.) I was not disappointed. In Girls, we find, for maybe the first time ever, an accurate reflection of what our city experience is like. I think it’s fair to guess that this show is going to be huge, Lena Dunham is the first real “Everyperson” for the cynical,educated, mid 20s crowd. The show doesn’t even air until Sunday and it’s already been praised by scores of critics. But as a twenty-something, I feel like I relate to this show and understand it in a different way. Critics and older audiences may love Girls for its wit and boldness, but if you’re a twenty something scraping together rent and dealing with job searches and friend drama, you will be able to enjoy this show in a way that no one else will. The characters talk like young urbanites because they are played by them, and written by them. If I could will my way into any writer’s room in television, it would be this one.

This show is brave in a way a lot of shows aren’t. It offers up young, vibrant characters who are as flawed as they are ambitious or likeable. They eat cupcakes for breakfast and learned about New York from Rent and SATC episodes. The characters are smart, funny and confident, yet riddled with anxiety and selfishness and self-doubt. In other words, they’re real. They’re you, or your sister or the annoying girl who works with you at the cafe . And with all this harsh honesty, comes a lot of laughter. This is a funny, funny show. In a way it’s Larry David meets a grown up My So Called Life, but it’s really got a voice and tone that feel completely unique. It’s loud, and brash, and at times painfully awkward.

When the credits rolled at the screening, I had a lot of thoughts flying through my mind.

“This soundtrack was perfect!”

“How do I get an audition for this show?”

The truth is I am not some hot shot attorney who drinks Manhattans and has a killer blazer collection. But we all have to start somewhere…and now there’s a hilarious show to demonstrate just how rough that start can be.

Kristy LaPointe is an actress, writer, and avid hummus connoisseur. You can follow her on twitter @kristylapointe, or check out the blog she half-owns at adeleandkristy.tumblr.com.

For The Kids: MakerKids Set To Open in Leaside This Weekend