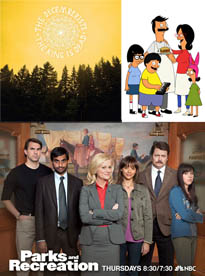 Pop 5! The GG gowns, why we are hungry for Bob’s Burgers & Snoop’ll Make You Wet!

(And that’s the last time we include “burger” and “wet” in same intro.)

Dress Envy – Winners Schminners. The best thing to emerge from the Golden Globes last night were the DRESSES! Oh, and Hollywood’s big fat introduction to something called British cheek (thanks Ricky!). Top three? Emma Stone in Calvin Klein and Anne Hathaway in Armani Prive and Sandy B in blunt bangs and Jennifer Packham.

Parks and Rec is Back – Parks and Recreation, one of the funniest shows on TV, returns to Thursday nights this week. How we have gone eight months without the Leslie, Ron and Tom hilarity shitstorm, I do not know. But to make it up to us, we get a bonus Parks and Rec treat: Rob Lowe.

New Decemberists – The new album from the altrock/folk band The Decemberists is out this week. It proves they’re as amazing acoustic and melodic as they are on the large scale opus/project that was their last album. ‘The King is Dead’ is out on the 18th.

Snoop’ll Make You Wet – Ya. Veering from the folk/alt rock/ mannerly portion of the Pop5, His Snoopness’ new video is out. Sometimes you just need to take a thing at its face value, ya know? Dig it.