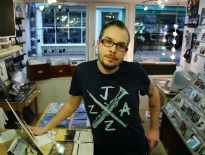 The R.G. Morrison leave us yearning for the open road and our own record shop

Soon after discovering The R.G. Morrison, I realized that they are exactly the kind of band I would want to be (if I had any sort of valid musical credibility beyond being a high school band geek). Consisting of Sarah-Jane on bass, Sweet Baby David on electric guitar, James Forde Stewart on drums and R.G. Morrison on vocals and guitar, the folky four-piece make music that conjures up fantasies of road trips across the Midwest and tips its hat to the likes of Crosby, Stills and Nash.

The band’s most recent album, Farewell, My Lovely is referred to as “four years of writing, stolen moments and evenings to recall stories about ancestry, Charles Bukowski, love lost, love found, and Clea DuVall.” Recorded and produced inside the Morrison family home in the southwestern England town of Devon (where the band hails from), creaking floor boards and open fires make up the ambience of the songs, which were then polished off at Peter Gabriel’s Real World Studios before being released to critical acclaim.

In town soon for Canadian Music Week, R.G. Morrison took some time out of his busy schedule (oh yeah, he also runs the incredibly cool Drift Record Shop in Devon) to answer some questions.

SDTC: How would you sum up The R.G. Morrison in one sentence?
R.G. Morrison: “A band and a man that can’t stop their fascination with recorded music… no matter what better judgement says.”

Since you’ll be in Toronto soon for Canadian Music Week, is there anything you’re dying to see or do?
Record Stores. I hear Sonic Boom and Soundscapes are supposed to be pretty great. I saw a band called Zeus last year, I’ll be sure to see their set at CMW… they are amazing (signed to Arts & Crafts) – otherwise the rule of touring is always try and find the best local cuisine.

What are your three must-pack necessities when you’re on the road?
Headphones. Notepad. Socks.

Your Facebook page says your minds are always changing on who your influences are, so who are they right now?
This week I’ve played a lot of Magnolia Electric Company, Low Anthem, Mogwai, Toro Y Moi, Yuck and Baths. Tonight is gonna be all about Neil Young.

Is running a record shop as cool as it sounds?
Yep, it sure is! It’s tough somedays, but you meet the best people and you’re all connected by just loving records. The whole MP3 thing just changed the game, but little victory at a time it’s getting stronger and stronger and it makes it more special than ever to be an indie shop stacked to the rafters with the best music.

What/who are your influences, musical or otherwise?
Robert Crumb. Love him. An astonishing genius; everything he does. I’ve been working with a load of poster artists recently also (for Flatstock and SXSW) and I think that is an amazing world… I’ve also been on a bit of a wine journey of late. I am still a luddite, but I am enjoying learning.

If The R.G. Morrison were a book, what book would they be?
Well ‘The Catcher In the Rye’ cracked me up throughout, sounded just like my 15/16 year old inner monologue. If not that then something to do with Hemingway’s Spain… we’d be off blowing up a Spanish bridge I guess.

What is the best piece of advice you’ve ever received?
A good one recently was “Never complain, never explain.” I guess the most resonant piece of non direct advice I ever heard was Via Hunter Thompson; “The music business is a cruel and shallow money trench, a long plastic hallway where thieves and pimps run free, and good men die like dogs. There’s also a negative side.”

Our Pick of the Week: Myseum x Sonic Boom

Our Pick of the Week: Record Store Day at Sonic Boom