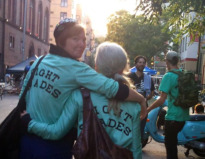 Toronto Biker Girl Gang Deadly Nightshades are tearing up a neighborhood near YOU!

By Kait Fowlie
Every once in a while, an entourage of blazingly rad females will cross paths, design stuff in a sustainable manner, bike around the city, and wear a lot of spandex. When this happens, the angels sing and the people of Toronto rejoice because they make our urban living situation a whole hell of a lot more interesting. What started as a 40-drinking escapade on wheels has exploded into a local phenomenon of partying with purpose. This is not just your average midnight bike crew (if there is such thing). This squadron of females advocates eco-friendly transport and sustainable art and design, as well as partying until the cops show at their door while wearing nothing but a bra and a rainbow thong (this happened). Unfazed by any amount of spandex, and named after a deadly prison plant, the Deadly Nightshades are not so booked that they couldn’t take a time out to hang with us in Dufferin Grove Park for a while to chat about the wheels they have turning (in the mind and on the road) and their upcoming party this Saturday.

How does Toronto inspire your antics?
Kirsten White: It helps us see where the mediocrity line is. I love Toronto, but sometimes I feel like our fashion and our party scenes are a bit behind. Park drinking, 3–4 years ago, no one did it. There are so many way cheaper alternatives to have a lot of fun. It took us a while to realize that. The city inspires us to push the limits of mediocrity.

Cat Essiambre: New York for example, is amazing, but we might get lost there. We just came back from the 10th anniversary of the Bike Film Fest, which was so good.

How did the name of the crew come about?
Cat: We need to make up a story about that. Four years ago, Niamh and I got back from travelling and she made us all matching denim vests that said “heels on wheels” on the back. Back then it was pretty much all about us drinking 40’s and biking around the city.

Kirsten: We should make up a story about one of us eating a deadly nightshade and surviving.

What is a deadly nightshade, exactly?
Cat: It’s a plant. It used to grow in prison yards and inmates used to use it to poison people. It’s also quite a beautiful plant, I think. So yeah, we’re named after a deadly prison plant.

Kirsten: We come up before it on Google search now!

What’s your favourite part about partying in Toronto?
Kirsten: I like that it’s mobile. You can usually get a group of people together, go out, then end up anywhere. With pocket beers. We don’t even really pay for shit … well, we pay for it at the liquor store. Fireball is a staple.

Kirsten: We like going to places we can mosh and smash up against your friends. Then everyone ends up at my house in my kiddie pool with their pants off.

Favourite places to shop?
Cat: The only place I really shop is Goodwill and Value Village. We make most of our own shit too.

Kirsten: Vintage 69, too. Irene works there, it has amazing vintage. We buy a lot of vintage not because its “cool” but because its sustainable too.

Cat: I don’t really shop. I don’t even go into real stores anymore. I usually have to choose between beer or clothes.

What kind of projects are you working on for the future?
Kirsten: I used to work at this treatment center for adults with mobility issues, who didn’t have the freedom to move. So right now we’re working on making 40 swings …originally I wanted to hang them from trees all over Trinity Bellwoods for Nuit Blanch but they rejected me. We’re going to make it into an installation after we’re done.

Cat: There’s also the gallery spin we’re doing with the Drake. We host it. Basically we promote it, dress up in ridiculous spandex, maybe even some sea foam Mexican wrestler masks, show up around the galleries, then end up at the Drake. It takes place on the last Thursday of every month. Parties and shows, and parties and shows … ending on Saturday, the day of our jam [“SPANDEX SPANDEX”, taking place at 11 pm at a top secret location that will be announced closer to the date, Saturday the 21st, check back on it here http://www.facebook.com/profile.php?id=508947405&v=photos#!/event.php?eid=150246881653371&ref=ts ]. I’m actually kind of scared for the ridiculousness that might ensue at this party. We have a huge list of goals for the next year… possibly starting a new line of clothes, we heard you can actually move to New York without a Visa, as long as you do your thing and take care of yourself, so that’s a possibility.

What words of warning do you have for bike thieves out there?
Kirsten: I just got my shit jacked out of my backyard. My lowrider.

Cat: We all have matching lowriders. My advice to them would be don’t steal bikes, bro. That’s a slogan they use in New York. Youtube it.

Kirsten: Its anti-productive – you’re in the same income bracket as those who ride bikes. The bike community is such a loving, warm community that supports each other. There are so many people who are starting to care about it too, what with rent costs going up etc.

Cat: I’m on Craigslist all the time – looking for Kirsten’s bike, and there’s this dude who tells you to watch out for this other dude who is a Craigslist bike scammer. These people are out there.

Kirsten: It’s not a lasting career, (bike thieves are) not going to make it. Bike theft is the only time I promote violence.

Set Me Free or Bikes on Wheels?
Cat: Bike Pirates. It’s volunteer run, and pay what you can.

Kirsten: They make use of used goods, which is nice because it’s a little more sustainable. There are a lot of people out there who will try to gouge you for parts. They are accessible, too. They teach you how to fix your bike, too. If I had a car, I’d want to know how it works and how to fix it … the same goes for bikes.

Cat: Every Sunday is also a day for women and transgendered people, which is good because it eliminated the possibility of being intimidated by biker dudes.

What are you up to tonight?
Kirsten: It’s open night for polo at Scadding Court! It runs 8:30 – 11 every Monday and Wednesday.

Cat: Welcome games are slow, people play nice and encourage each other. It’s a good night, and it’s free.

Anything else you want to add?
Kirsten: Right side suicide. If you’re passing traffic, don’t go to the right of a parked car, go to the left like a car. That’s my tip for the week. I was yelling that at some random woman today on the street. Safety first.