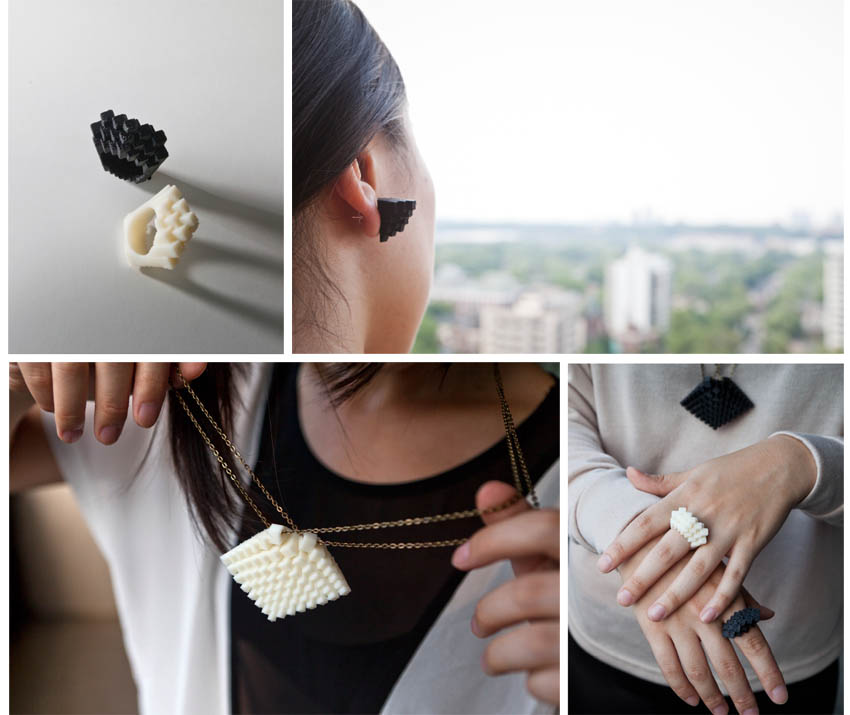 The Annex apartment of Matt Compeau and Bi-Ying Miao is silent, except for the hum and whirr of a machine on the desk. About the size of a milk crate, it looks like a robot from a bad 80s sci-fi film. Inside this plywood box with glass windows, a silver arm moves back and forth, back and forth, laying filaments of cream-coloured plastic in a soothing rhythm.

The machine is hooked up to two large computer screens bearing complex polymetric designs, and sits under a white board. Littered around the machine are various plastic forms: some organic swirls, some toothy necklaces, others warped discards. The whiteboard above the machine reads Hot Pop Factory in red marker.

This is where Miao and boyfriend and design partner Compeau craft their creations. Hot Pop Factory is a jewellery studio creating one of a kind pieces on a 3D printer, a new DIY technology that has inspired a loyal niche community of hackers. Called Rep Raps, these machines can be used to make parts for machines, practical objects, or pieces of art. Compeau and Miao both studied architecture, and bought their Rep Rap thinking it could create models of buildings. “Originally,” Matt says, “A 3D printer was just kind of a creative outlet for those crazy designs that wouldn’t get built otherwise.” The two started experimenting, and came up with their jewellery designs. “I started wearing it, and it’s really empowering,” say Miao, who loves that now, instead of buying something, she can dream up what she wants and create it. Once the design is done, it prints in about half an hour.

Soon, Miao’s co-workers were asking where she got her self-designed pieces, which are inspired by a warrior aesthetic: The two wanted to create something sharper than the usual organic shapes designed on 3D printers. Miao designs jewellery she would want to wear, and it works. Recently, the two took their Rep Rap to Ladies Learning Code to do a demonstration, and brought some pieces with them. They sold out.

The pieces are informed as much by Miao’s aesthetic as they are by the materials and the machine that prints them. Compeau and Miao keep a board full of tweaked designs and “Interesting failures.” They’ve learned as they design, and the results of the learning process have found their way into the final product. Their necklace was originally printed lying down, with a flat back. Warped results led them to print the item standing up, propped by stilts printed in a water soluble material that are then removed. The result is a piece that is reversible, textured from back to front. “We really wanted to highlight the striations, the actual texture, it was this idea of creation, which is what personal manufacturing is,” Miao says. “Small ideas building up, one on top of the other.”

The Rep Rap community is committed to open source idea sharing, meeting at places like Toronto’s Site 3, a maker space designed to facilitate hacking and creation of all kinds. Compeau and Miao think that, as the technology becomes more accessible, the design community will start to engage with it. “I think every discipline is changing now to be a lot more hybrid and interdisciplinary,” says Miao. She thinks the insular nature of the design community will need to start opening up as the world of creation becomes more interconnected.

Compeau and Miao are hoping they can share their newfound creative outlet with as many people as possible. “This has been revolutionary for us, so we want to give other people the same kind of feeling,” Compeau says. To that end, they’re hoping one day to expand into customized pieces, where people can go online and tweak their original designs to create their own unique jewellery. “It’s going from mass production to mass customization,” Compeau explains, speaking to the democratizing effect of the technology.

As Rep Raps become more user friendly, people with more and more diverse backgrounds will start working with them, and discover what Compeau and Miao have found through Hot Pop Factory: The possibilities are endless.

To buy a 3D printer like the one Hot Pop uses, try Makerbot.