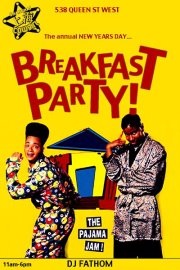 7 pm Fort York Album Release @ The Dakota Tavern, 249 Ossington Ave. Celebrate the release of Fort York’s new album, “Feels Like Then”, with a great night of music! Doors at 6 pm, music at 7 pm. $6 at the door.

10 pm Dance Armstrong @ Clinton’s, 693 Bloor St. W. No genre specific theme here, merely songs that make you want to dance like you’ve won. And won big. Anything and everything from Gorillaz to Bowie, Hot Chip to Jay-Z, Paul Simon to The Stone Roses, The Beatles to Postal Service to Digable Planets. And probably Hall & Oates. Only the most victorious of songs! $5.

Check out our NYE Hit List for our party picks!

11:15 am Toronto Polar Bear Dip @ Sunnyside Beach, 1755 Lakeshore Blvd. W. Since 2006 the Toronto Polar Bear Dip has raised over $88,000 for Habitat for Humanity Toronto, an organization that works in partnership with families who are working to escape sub-standard, poverty housing. Registration begins at 11:15 am, dip at noon. Participants are asked to raise a minimum of $20 in pledges or donate $20 when registering.