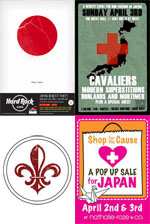 Toronto Steps Up For Japan From West to East to The Downtown Core, and Everywhere In Between

The disastrous part of natural disasters is not their mere existence; Earthquakes and Tsunamis have been shaking up the surface of the Earth and below for eons. What makes something like the Japanese Earthquake such a heart-wrenching catastrophe are the human lives colliding with the lives of the Earth’s natural phenomena. We who are lucky to be safe witness helplessly through a screen as entire villages are drowned with little warning, without a chance, and without sympathy.

As our hearts broke for the affected people of Japan and  the sweeping devastation, first-hand accounts digitally updated Tsunamis to an intimacy we have only been able to experience recently. The impending nuclear hazard is proving to be the scariest aspect of them all – a disaster that can’t simply be cleaned up or re-built over years of hard work. Toxins may seep into our ecosystem as nuclear scientists race to turn back time and repair damaged plants. At this time, I feel so sheepishly lucky to be on the other side of the world, watching, waiting for things to get better and for the people of Japan to once again lead normal, happy lives like they deserve. Since the disaster, people are stepping up and doing all they can to help Japan. Several benefits and fundraisers are popping up for Japan from east to west and everywhere in between, including an entire blog. Whether you like tattoos, locally made fashions or rock n’ roll, there’s something going on to push everyone to contribute and help Japan.

Japan Benefit Party at The Hard Rock Cafe.
The Hard Rock Cafe and JETAA (The Japan Exchange and Teaching Alumni Association) have joined forces to throw a special benefit party on Friday, April 1st from 8pm – 2am at the Yonge & Dundas location. Tickets are $20 and all proceeds go to The Red Cross. A stellar silent auction including a trip to New York will be up for grabs. Order dinner and listen to live local bands and DJs all night at a Toronto institution.

Tattooers for Japan at Archive Tattoo.
Archive Tattoo (1528 Dundas at Dufferin) is throwing a special one-day-only walk in event on Sunday, April 3rd from 11am – 8pm. All proceeds will be donated to the International Rescue Committee. All tattoos will be between $50-150 and you can pick from some special designs drawn up specifically for this day. Get inked by legendary Toronto artists donating their time for a great cause or buy prints, being sold on a first come first serve basis.

Shop For The Cause: A Pop-Up Sale for Japan.
Leslieville boutique and DIY craft hub Nathalie-Roze & Co. (1015 Queen E. at Pape) is throwing a special 2 day pop-up sale the weekend of April 2nd-3rd, 11am – 5pm both days. All proceeds will be going to The Red Cross. Expect a wide variety of awesome goods and services that are being donated by caring vendors to sell at discounted prices. Stock up on women’s clothing and accessories, vintage, baked goodies, and bid on a silent auction.

A Benefit for Japan at The Great Hall.
A slew of great local bands like The Cavaliers, Modern Superstitions and Donlands And Mortimer plus a special surprise headlining guest are performing a special benefit show at The Great Hall (1087 Queen W at Dovercourt) on Sunday, April 3rd from 7:30 – 10pm. Tickets are $10 at the door (includes 1 raffle ticket) and all proceeds will go to The Red Cross. Tons of great donated swag and baked goods will be for sale as well, and several raffles will take place throughout the night.