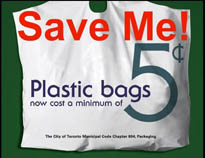 What You Can do to Help Change Rob Ford's Mind About Eliminating the Five Cent Bag Tax!

You’ve probably heard about Rob Ford’s plan to crush the 5 cent bag
tax. (He hates making us pay for things.) It may seem like an
insignificant change, but, like most thangs in the environmental
sphere, it would actually make a big difference. 30 days after the fee
bylaw came into place in 2009, bag use in the city actually dropped
70%. (Loblaws alone eliminated 1 billion plastic bags from going into
a landfill!)

It was a small change that started off with people flailing their arms
and protesting, and is now totally integrated into our daily lives.
People just adapted to it, the flailing stopped, and no one died! It
had great results – we were made more aware of the plastic we were
consuming and forced to think about whether or not we really needed
it. It was a small step that might have led to a bunch of other cool
developments, like plastic reduction in other areas, or even returning
to the original idea of donating the 5 cents to an environmental
cause. Before the bag tax was in effect, a waste audit estimated that
the average Toronto household used around 9 plastic bags per week.
Even if that number stayed the same throughout the duration of the
tax, that’s only about 23 dollars per year – about the cost of a
relatively respectable box of wine. Not bad.

The nickel fee is one of Toronto’s cheapest ways of making a huge
reduction in landfill waste, and by eliminating it, our main man Rob
actually ends up spending more of our dough on the city’s unionized
waste disposal. Smooth move? I think not.

Here’s what you can do. Bring your own bag regardless. Re-use the
plastic ones you already have, or drop a few bones on a canvas one
available at most grocery stores. If you’re feeling extra daring, give
the man a call in his office at 416-397-3673 to voice your opposition.
Word on the street is, Ford’s staff is keeping a tally, so it couldn’t
hurt to add your voice. Also email him at mayor_ford@toronto.ca.

If you’re a little lost for words, check out this letter written by
Rob Grand, the founder of Grassroots Environmental Store.

Mayor Ford,
With all due respect I am encouraging you to reconsider your idea of
eliminating the 5 cent levy on plastic bags in the City of Toronto.
As a retailer I have seen people’s habits change quite quickly with no
complaints and no concern about the 5 cent tax.  On the contrary, our
retail customers are quite willing to adopt reusable cloth bags – it
makes economic sense and it makes environmental sense for all
Torontonians.

By eliminating the 5 cent tax, retailers will just build the expense
into the cost of goods sold and the higher that expense the more
expensive products become – that doesn’t make economic sense for
anyone.

I appreciate that you are looking for ideas to engage your
constituents and you are answering the call of some of your
supporters, but in my experience as a retail owner/operator those
people are a small group and do not represent the opinions of the vast
majority of Torontonians.
Thank you,
Rob Grand

A Word on These Rob Ford Valentines, From Rob Ford