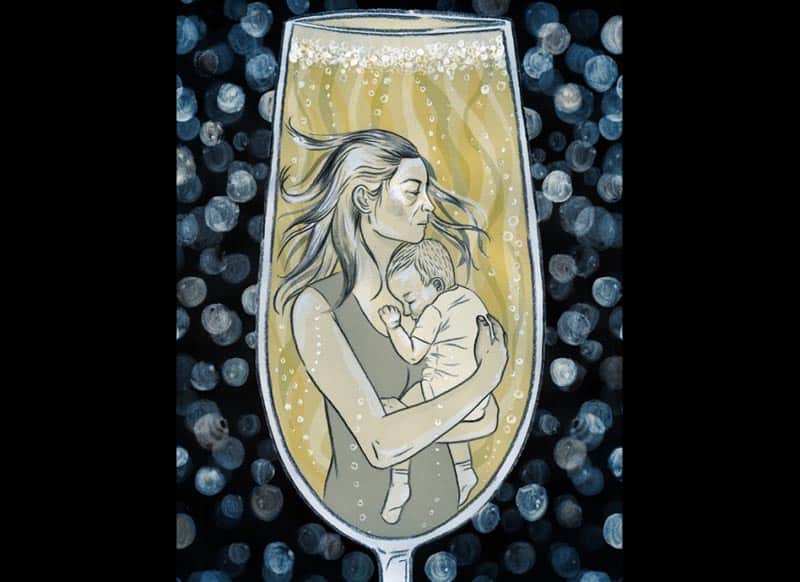 "Drunk Mom doesn't have to be my story. And it's not the end of Jowita's."
Life Stories

An alcoholic’s response to “Drunk Mom” by Jowita Bydlowska

Drunk Mom is a horrifying and beautifully written memoir. The book is by Jowita Bydlowska, a 30-something Torontonian who boldly shares stories from her first year of motherhood as a raging alcoholic. Her honesty is shocking. Her stories are infuriating. Drunk Mom frightened me. I threw the book against the wall. The book would be a difficult read for anyone, but for me, its arrival on my doorstep was poignant and eerily timed.

When I was younger, I recall telling someone that the thing I wanted most from life was to have a child and be a good mom. I wanted a fulfilling career, but having a family was more important. But things got a bit derailed the morning when, after an all night bender, someone turned to me and whispered firmly, “You’re not fit to be a mother.”

“Fuck you! How dare you say that!” I screamed. It was the lowest point yet in my struggle with alcoholism. “I might harm myself, but I would never be like this if I had a baby!” It was a punch to the gut. I fell to my knees and sobbed.

The next day, I attended one of those Amazing Awesome meetings in a church uptown. Those words, hurtful as they may have been, got me to finally take my abusive drinking seriously. I haven’t screamed at someone or taken a drink since.

That was two-and-a-half years ago. And after spending that time working on my recovery—be it in those Amazing Awesome rooms, at my therapist’s office, or in a Starbucks—I’m feeling ready for a new chapter. Approaching 34, I work seven days a week at a demanding job, and have no kids. But I made an appointment with my family doctor to discuss when my IUD should be removed. I was ready to try to have a baby. After the appointment, I walked home under a sunny sky with a big smile on my face, excited for what was to come.

Winding up my street, I noticed a brown envelope jammed in my front doorway. Keys out, purse unraveling, I bent down to tear the package open. The mail was from Random House—I had been couriered Drunk Mom. Before I even turned the key, I flipped the book and read the provocative blurb on the back.

Three years after giving up drinking, Jowita Bydlowska found herself throwing back a glass of champagne like it was ginger ale. “It’s a special occasion,” she said to her boyfriend. And indeed it was. It was the party to celebrate the birth of their first child. It also marked Jowita’s immediate return to full-blown alcoholism.

Way to ruin my high-on-life buzz.

I read Drunk Mom like I used to drink: big gulps, chugged. Like a glass of red wine, the book was never out of sight. And just like drinking, it made me sick.

The language is poetic; romantic, even. But this is an ugly story. This isn’t Drunk Mom who sings Nancy Sinatra at your cousin’s wedding—this is Drunk Mom who pumps the poison out of her breasts and into the kitchen sink so that her baby doesn’t get the bad milk.

I’m not a mom yet, but there are parts of Jowita’s story that are painfully similar to my past life—especially when she describes the morning-after guilt. Waking up with her boyfriend in bed, trying to recall how the night happened. Had they had a fight? Was he disgusted with her, or did he still love her? Her description of the scene brings back the memories I hate to revisit: “My clothes are all over the floor, tights in the hallway. In the bathroom I look in the mirror. No black eye. Not too bad at all. Swollen on the left side and there’s a big chunk of skin scraped off along the cheekbone, but nothing serious. I can drape my long hair over it and you won’t see a thing.” Reading the lines, I can feel the sting of the scrapes, taste the dry mouth. “I get under the shower. My body feels tender all over, but especially on the left side, and I have a hard time bending down when I shave my legs, but I make myself.” That could be me. That was me.

Jowita would throw up on her fist to mask the sound; I would turn on the tap. Jowita drank before attending all the glamourous parties. So did I. Jowita woke up in bushes. I passed out in taxis. But no, I kept telling myself, I wouldn’t do this if I had a baby! Do you think Jowita thought she would?

When you’re six months sober, a year sober, you can see your bottom in a rearview mirror. As you continue your sobriety, like a road trip, you begin to lose focus of where you began. The route begins to get sunny. You open the window and feel better, stronger, and full of life! Hoooray! I feel wonderful, alive! You get distracted and forget about what brought you to this gorgeous new place. Then you read a book like Drunk Mom and it’s like crashing into a lamp post.

Maybe Jowita felt like I feel: strong, happy, under control. Maybe that’s why she took that first sip. I had to take breaks reading her story. I had to remind myself that Drunk Mom was in fact her memoir and not mine. I had to keep telling myself that although we were both 30-something women, writers, and alcoholics who ran in similar circles and knew the same people, this wasn’t my story. Drunk Mom doesn’t have to be my story. And it’s not the end of Jowita’s.

The beginning was tough, but luckily Hugo, her baby boy, survived that first year unscathed. His childhood and adolescence are ahead of him. He may never know a drunk mom. Well, until he reads it.

In an interview, I ask Jowita if she had read a book like Drunk Mom before giving birth, would it have changed things? “It would scare me.” It has surely scared me. She tells me that she set out to write a book about an ordinary villain; she has achieved that brilliantly. But this ordinary villain will help a lot of people.

It takes guts to write a book called Drunk Mom. You couldn’t pay me a million bucks to slap my name under a title like that. In fact, I suspect very few people in the world who share a story like this would. But I’m glad Jowita did because you know where I am right now? I’m about to enter one of those Amazing Awesome meetings. I hadn’t been going regularly; I was taking a break. Drunk Mom brought me back.

Drunk Mom by Jowita Bydlowska is available at Amazon.com and bookstores across Canada for $22.95.

"Drunk Mom doesn't have to be my story. And it's not the end of Jowita's."