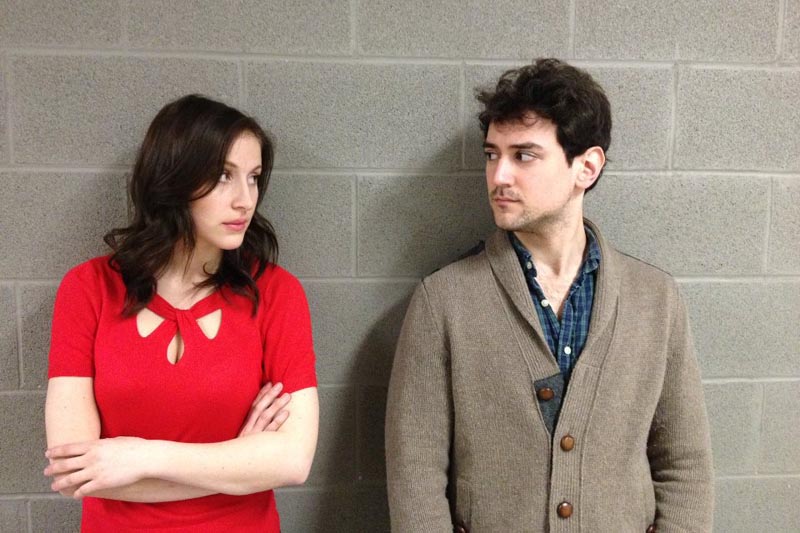 "I hate saying this play is about a 'relationship.' All plays are about relationships. It is a play about life."

An interview with playwright AJ Laflamme

Playwright AJ Laflamme’s Empty Boxes is opening at the Red Sandcastle Theatre at the end of the month, and we had a chance to speak with her about her theatre and writing experience. AJ trained as an actress and teacher and has worked for companies like Soulpepper, Canadian Stage, Citadel Theatre, Vancouver Playhouse, Ryerson Theatre School, and Sheridan College. Empty Boxes is the first full-length production of AJ’s independent work.

Her interest in theatre began after watching a production of Joseph and the Amazing Technicolor Dreamcoat at age 10. “I bought the soundtrack and listened to it until my mother’s ears bled,” she says. “I became obsessed with musicals and the stage. We didn’t have money for acting classes, so my only exposure to theatre growing up was through public school programs. Luckily I was accepted into the UTM/Sheridan College Theatre and Drama Studies program by the skin of my teeth, and that’s where I ‘fell down the rabbit hole.’ I was hooked and knew that there was nothing that would make me happier than being in theatre.“

SDTC: Did your love of theatre draw you to writing?

AJ: I’ve been a writer my entire life. As the quiet, youngest child growing up with a single mom who suffered from Borderline Personality Disorder, I quickly learned that the only way for me to express my feelings and emotions was through writing. To this day I still have a hard time communicating orally, but writing was my world. When I told people I had written a play, everyone was impressed: ‘Wow, that’s a real accomplishment!’ was the response I got. I was surprised; I always thought that everyone was secretly writing in their spare time.

SDTC: What was the writing and editing process like for you as an individual on Empty Boxes?

AJ: Writing is the really intense part of the process for me. It takes a long time for an idea to fully develop in my brain, but once it does, I lock myself to my computer for a day or two and just let all the words pour out. After that, I need to walk away for a couple months; let some time come between me and what I’ve written, so I can look at it with a fresh perspective.

Editing is the fun part. I usually get a group of people together to do table readings so they can give me feedback. I love seeing what I’ve written grow into what it is meant to be. Even during the initial writing part I often know when something is bad, but I can’t think of anything better at the time because my main focus is getting the overall story complete: it’s like putting in a place holder. During the editing process, I can take all the stuff that isn’t working, which I call “vomit,” and rewrite. After I’ve written something, I have the shape; but it is in editing that the real artistry emerges.

SDTC: What inspired you to write Empty Boxes? It’s based on the end of a relationship—does it have any auto-biographical content?

AJ: I feel like everything I write has some aspect of auto-biographical content. Working in an industry like theatre, often I don’t get a say about when I work and when I don’t, and it will frequently take me to foreign destinations for long periods of time. It makes it really hard to maintain a relationship, even when it is going really well.

When I wrote Empty Boxes, I was just out of school and entering this scary world of unknown. I spent a lot of time reflecting on the choices that I was going to be presented with and how I would deal with them, and this show is the result of that: What do you do when your dream man and your dream job are down two separate roads? Which do you choose?Over the course of my life, I’ve been presented with these options on a variety of scales, and I still don’t have the answer. It’s hard to find a balance between career and love. I chose love for a long time and now I’m picking career; in the end, I think you just need to pick yourself and do what makes you happy. It’s been serving me well for the past few years.

SDTC: You are a co-founder of the Homestead Theatre Project—what’s it like to have your own theatre company?

AJ: Having my own theatre company has been my dream for the past 10 years.  I spent a lot of my life waiting for things to happen, until I realized that the only way they are going to happen is if I do it myself.  I had been talking about the idea for a company for as long as I can remember, so when Cory Doran sent me a text saying, “Let’s do this,” I jumped at the opportunity.

SDTC: What can we expect from your show?

AJ: “If you love something, let it go; if it doesn’t come back, then it wasn’t really yours to begin with” is a line that Sarah says in Empty Boxes. We’ve all heard it, but does that apply to a relationship? What about fighting for what you want in life? Empty Boxes takes an unapologetic look at what happens when a relationship goes wrong and there is no one to blame but yourself. I think anyone can find a reflection of themselves in the show. Have you ever kicked yourself for not saying something when you should have? For saying the absolute wrong thing? For waiting for a person to change and realizing it was you who was afraid of changing all along?

I hate saying this play is about a “relationship.” All plays are about relationships.  It is a play about life. When you pack up your life and put it into boxes, what are the things you choose to take with you and what do you throw away? How do you know you might not need those things later? How do you know you are making the right decision? These are all risks we each take every day. It is a shared human experience.

Empty Boxes runs May 30 through June 9 at the Red Sandcastle Theatre (922 Queen St. E.). For ticket information go to homesteadtheatre.ca. For more about AJ and her writing, go to: artbytheft.com.