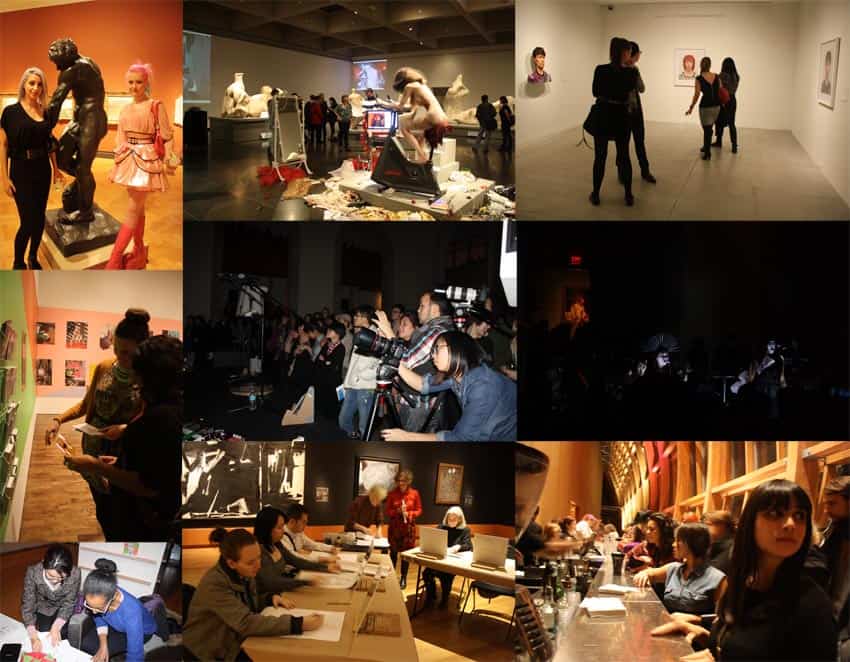 Admit it, you often pay more attention to the people at an event than the event itself. ‘Crowd Review’ is a SDTC column that reviews the atmosphere, audience, and sometimes odour of various Toronto scenes.

I attended the inaugural First Thursday at the AGO in September, and want back for the latest event last week. Both drew a fashionable crowd of twenty to thirty somethings clad in emerald and oxbloodlayers who seemed ready to have a good time on a Thursday night. The crowd was less energetic than it had been on the first First Thursday but there were elements of the night that had theattendees buzzing.

Nina Arsensault’s piece Narcissism Will Heal The Sick, seemed to draw the crowd together in a whispering frenzy. Strolling around the Henry Moore Sculpture Centre as Arsenault performed, I found it difficult to keep my eyes off of her. People could not look away; they didn’t glance and walk on, continuing their conversations about weekend plans into the next exhibit as they had in others. They stopped and gathered in clumps to watch. The groupings starkly contrasted the solitary display shown to us.

As I snapped shots of onlookers I realized that while they were puzzled and mesmerized by her performance (which was throughly absorbing) they were also revelling in the opportunity she had granted them: to observe her naked body. Some onlookers were bashful or uncomfortable while others gazed openly. We so rarely see naked people in a non-sexualized environment; the chance to view the human form drew people in. Though Nina’s work was of particular interest to the crowd, two nude life drawing sessions created similar groups of gawkers. I overheard one person saying, as she tried to navigate the congestion, “Ugh, these people are just standing around staring!”

Of course they were. And why not? Aside from our own bodies, the bodies of our partners and the typically affected bodies seen in pornography we aren’t granted many opportunities to see people naked. I think it would make my life a lot easier if I could just stare a bunch of nude people non-sexually for a while. A familiarity with the differences, similarities and oddities of the forms other people embody might help end comparisons, measurements, and jealousies. Instead of being told “Everyone’s body is different and that’s okay,” I could see it and know it.

Later, while picking up some free postcards on the lower level of the AGO, a woman next to me joked that one of the prints looked like a vagina. Though it was funny (and true, classic probably-a-vagina painting), I was reminded of the naked people I had just seen. No longer hidden, their bodies became demystified; their parts no longer shameful or shocking. This revelation rendered her “joke” no more than an observation.

Sometimes seeing is understanding: the attendees of this First Thursday spent their time watching and studying art, performers, musicians and other people. As people sipped their wine, passed through the halls, chatted over gourmet fries, and as Yamantaka//Sonic Titan hit the stage the atmosphere was one of relaxed contemplation. It was a thoughtful crowd whose unique bodies moved asone while they swayed to the music, and as the event ended, strolled out the AGO’s tall silver doors and into the cold, wet night… a reminder of why people started covering up in the first place.

Rating: 4/5 Nudey Bums (that are all special in their own way!)