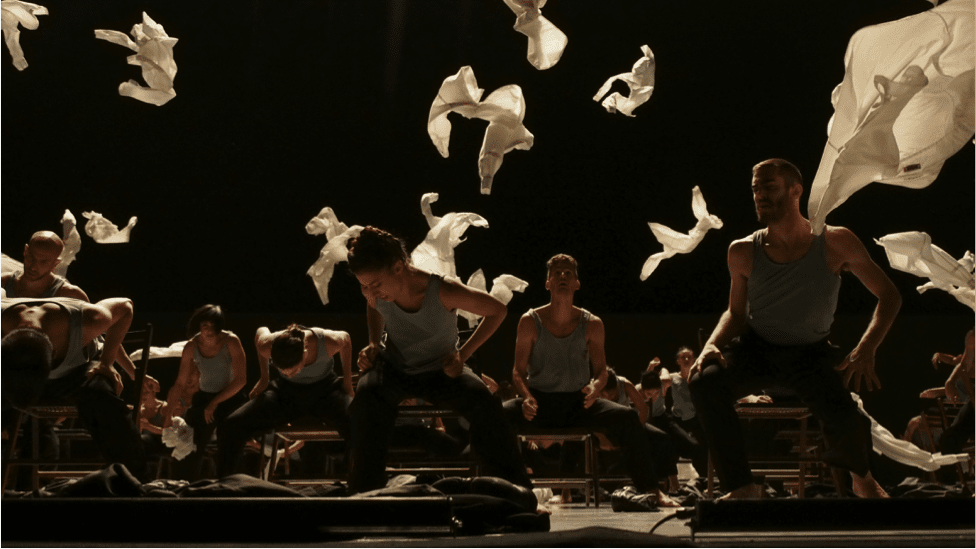 Batsheva: A Movement for Everyone

“Take up space . That’s all you need to do while you’re here today,” my friend Amanda assures me as I start to bend my body, mimicking the way others — who are almost all dancers — are beginning to warm up.

We are at Gaga/people, a workshop in the movement language of Ohad Naharin, accomplished choreographer and Artistic Director of the renowned Batsheva Dance Company of Israel. Amanda is reassuring me because I am not a dancer, and, upon seeing the high ratio of dancers to non-dancers in the room, I have become very anxious. Should I be here?

The doors close after the eager, happy folks on the waitlist have been admitted and a man says, “Let’s begin.” The mirrors are blacked out, and everyone in the room has been assembled in a very egalitarian way. We all face the tall, thin, man-bunned speaker in the centre, and it feels as though we are all participating, that it is a workshop for all of us. There are no observers.

The workshop leader is Ian Robinson, a young dancer in the company, and his first instruction is to “just float.” Immediately, my nerves are calmed by his un-judging presence, simple instruction, and general aura of acceptance. I feel this even more as we continue to move, guided by Ian, who moves with us.

At first, I move the same way with the same parts of my body, out of lack of creativity and generally feeling a little uncomfortable and awkward. I am not a dancer. But with Ian’s prompts, I slowly begin to take the risk of moving how I truly want, using all of my limbs, leading from different places and with different textures.

The “tasks” (guidance given by Ian) allow the mover to enter into an almost meditative state in which he or she is the only mover, moving exactly how he or she wishes, perhaps allowing himself or herself to see beauty in the creation of that movement. This was not instructed or directly stated, but it was the outcome of Ian building prompts of movement directions and textures on top of one another.

The language he used was as poetic as the collective movement coming from all the bodies in the room and, combined with the music that played softly around us, we were all expressing our own interpretation of Ian’s tasks with ease and inhibition. Within minutes, we were all lost in our own movement, and there was a lot of beauty in that.

And so, we floated. We let the feeling of “float” move through every limb and extremity, until Ian told us to continue to move like this as though we were made of water. We played with the idea of gravity, moving against it, with it, and using the texture of falling to move upwards or outwards with the same energy; we moved through honey; we moved as though there was electricity pulsating through every vein and artery; we felt the power and space of twist, and when we eventually made it down to the floor after exhausting ourselves, we explored the movement of collapse from different engines in the body.

Because of this focus on individuality throughout the exercise, it was particularly powerful to come together for a more synchronized set of movements as a swinging texture was introduced. The collective energy was palpable as we all moved to the same tempo, in-sync, feeling everyone around us doing the same.

As we finished and people started to leave the room, you could see the effect the experience had on them. They were wide-eyed and ready to take on the day. They were in their own bodies, a phrase that can mean different things to different people. I expect for dancers, being this way allows them to create movement in a way that is honest and authentic. Through experiencing the power and creativity of my physical self, I was able to see it in a new, positive light, one that I hadn’t been able to see it in before.

In theatre school, I had spent many hours in movement classes attempting to “move authentically,” and I realized after this workshop that I had never been able to do this on account of my profound self-awareness. I was so preoccupied with how my body looked during these movement exercises that I focused solely on the aesthetic of my movement and not the feelings I had inside of me. Gaga allowed me to move free of self-judgment.

Gaga’s influence and importance shone through at Batsheva’s performance of DECADANCE at the Sony Center for the Performing Arts that same night. It is clear the choreography and its execution by the dancers comes from a need to express an idea or concept through movement. Their powerful performance made us weep, laugh, and become introspective all in the span of one hour. We were all in total awe of the physical and artistic skill of the people onstage, who had so clearly mastered their craft.

DECADANCE is an amalgamation of excerpts from Naharin’s other works. One of the first excerpts features the dancers sitting in chairs, facing the audience in a semi-circle. They move between complete stillness, explosion in beautiful, perfect synchronicity, and spastic convulsions on and off their chairs. 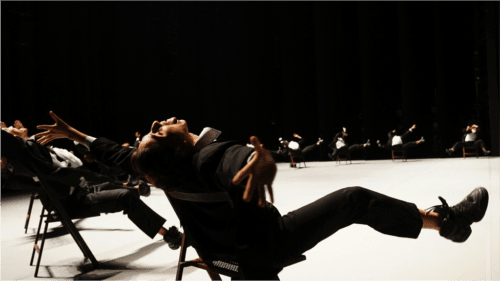 At one point, the house lights came up and the dancers entered the aisles. After some confusion and attempts at refusals by the audience members, it was clear that the dancers sought dancing partners, whom they brought up on stage with and proceeded to tango with. It was absolutely remarkable; and while the audience had no idea what they were doing, it didn’t matter. The Batsheva dancers made them look amazing, and the joy it brought those people was so clear it brought tears to the eyes of many sitting near us. It was almost an encouragement by the company: anyone can dance if they want to.

According to Noharin, Gaga originated from the healing power of movement. He believes expressing ourselves physically can have incredible physical benefits, and Gaga is a good route for accomplishing this (for dancers and those without any dance experience).

A workshop like Gaga/people can change a person’s entire perspective on movement. As a very un-hand-eye-coordinated person, dance always felt like a foreign practice that I would not in my wildest dreams be able to do. The workshop made it as accessible to me as breathing, and it showed when friends and I hit the dance floor at Clinton’s that night — I danced for hours, just for the sheer pleasure of it. If that doesn’t emphasize the importance of Gaga, I don’t know what does.

The 2017 Canadian Batsheva tour celebrates Canada’s 150th Anniversary with the support of the Embassy of Israel. If you are itching to know what an Ohad Naharin-directed performance feels like, Batsheva has not yet finished its Canadian or North American tour. You can see their tour dates here.