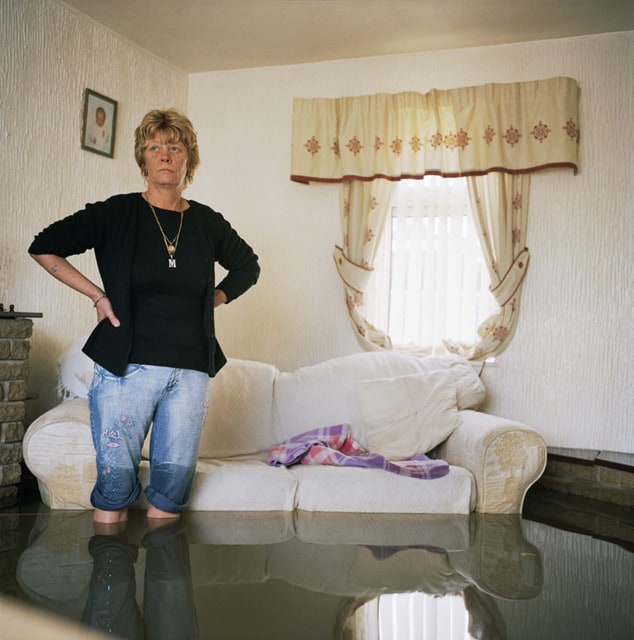 In light of the recent typhoon in the Phillipines, Gideon Mendal’s Drowning World Exhibit, feels unfortunately, and especially significant.

An art exhibit with its roots in journalism, Drowning World is a long-term, global exploration of flooding, or more generally, ‘where water meets land in a destructive way.’ Most of the photographs contain images of flood victims posing in front of the flood-damaged remains of their homes. The images range from countries as disparate as the United Kingdom, Haiti, Pakistan, Australia, Thailand, Nigeria, and Germany, and emphasize how a shared experience of tragedy and personal upheaval can erase cultural divides.

The exhibition runs until November 17th on Pattison Onestop’s shopping screens located in malls throughout the country. Pattison OneStop, in partnership with Art in Motion, is in the unique position of being able to engage millions of people daily with their series, and I applaud them for using their reach to initiate dialogue about climate change, especially as its effects continue to be so widespread and worrisome. In fact, the Drowning World exhibit is part of a larger initiative, with just that emphasis: The Carbon 14: Climate is Culture Exhibition + Festival, which runs until Feb. 2014, and aims to engage the public with issues surrounding climate change, through a number of local and national initiatives.

It’s worth checking out, and likely that you have already encountered other pieces in the festival. Opposing Views, for example, is an ultra-short video piece that broadcasts conflicting perspectives onto the face of Dr. Suzuki, and has been featured once per minute on Pattison’s 60 foot wide media board in Yonge and Dundas square for the past month.

Everyone’s favourite astronaut Chris Hadfield also has work featured in the festival. A Rare Perspective highlights 40 of his photographs taken from space, along with his original tweets. More Hadfield more of the time, please and thank you.

Finally, founder of Art for Communters and Curator for Pattison Onestop, Sharon Switzer, introduces the Festival in a rather unique way, with her digital video #crazyweather located at the entrance of ROM’s Roloff Beny Gallery. In the video, Switzer has comprised Tweets from all over the world, all on the subject of local weather. Individually they may seem inane–talking about the weather is basically the twitter equivalent of Instagramming your meal–but cumulatively, the piece intends to put larger climate change in perspective, making evident the extent to which it affects all of our lives. As a #fan of #Twitter, it’s also exciting to see how the site has become a tool for making art.

So as you’re out and about in the city for the next few months- whether in a mall, on the street, or underground- look for images, displays, and exhibits from the important and too-topical Carbon 14: Climate is Culture series- and be sure to catch the Drowning World exhibit, on until the end of the week.