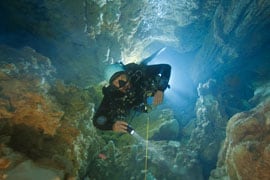 Broad, as part of the National Geographic Live lecture series, spoke at Roy Thomson Hall on Nov. 12. It was a really interesting hour and a half of stories and facts told through pictures, diagrams, and videos. Focusing on the blue holes of the Bahamas, Broad explained how such a natural phenomenon occurs, how divers stay safe underwater, and what kinds of facts, organisms, and scenes they find thousands of feet below the surface.

I think the most interesting part was when Broad said that he was nervous before coming out to speak to us (a packed house, I might add), but that when he’s about to begin a dive, he experiences extreme calm. I know that public speaking is, for many people, a number one fear, but to have that contrasted against the images of teeny, barely-squeeze-through, claustrophobia-inducing holes that underwater divers shimmy through was effective and mind-blowing. My friend Chelsey and I were both in awe of the bravery and sense of mental calm that these types of explorers have (we also both got into a fit of giggles when the cute old man behind us began to snore; a testament, surely, not to Broad’s presentation, but to this man’s ability to fall asleep anywhere, anytime). Some of the pictures and video clips that Broad showed us were absolutely breathtaking vast underwater worlds of crystal blue water, some large enough to fit multiple airplanes inside of them.

Broad was National Geographic’s Explorer of the Year for 2011, and it seems fitting. He was funny and friendly in his talk, his passion for underwater exploration evident with every anecdote (some hilarious, others terrifying) and visual aid. He joked to the young people in the audience about telling their parents they were taking time off school to go dive with “Uncle Kenny,” and while he was kidding, I wish I could take him up on the offer.

Kenny Broad speaks for a second night at Roy Thompson Hall on Nov. 13th, and tickets are still available!