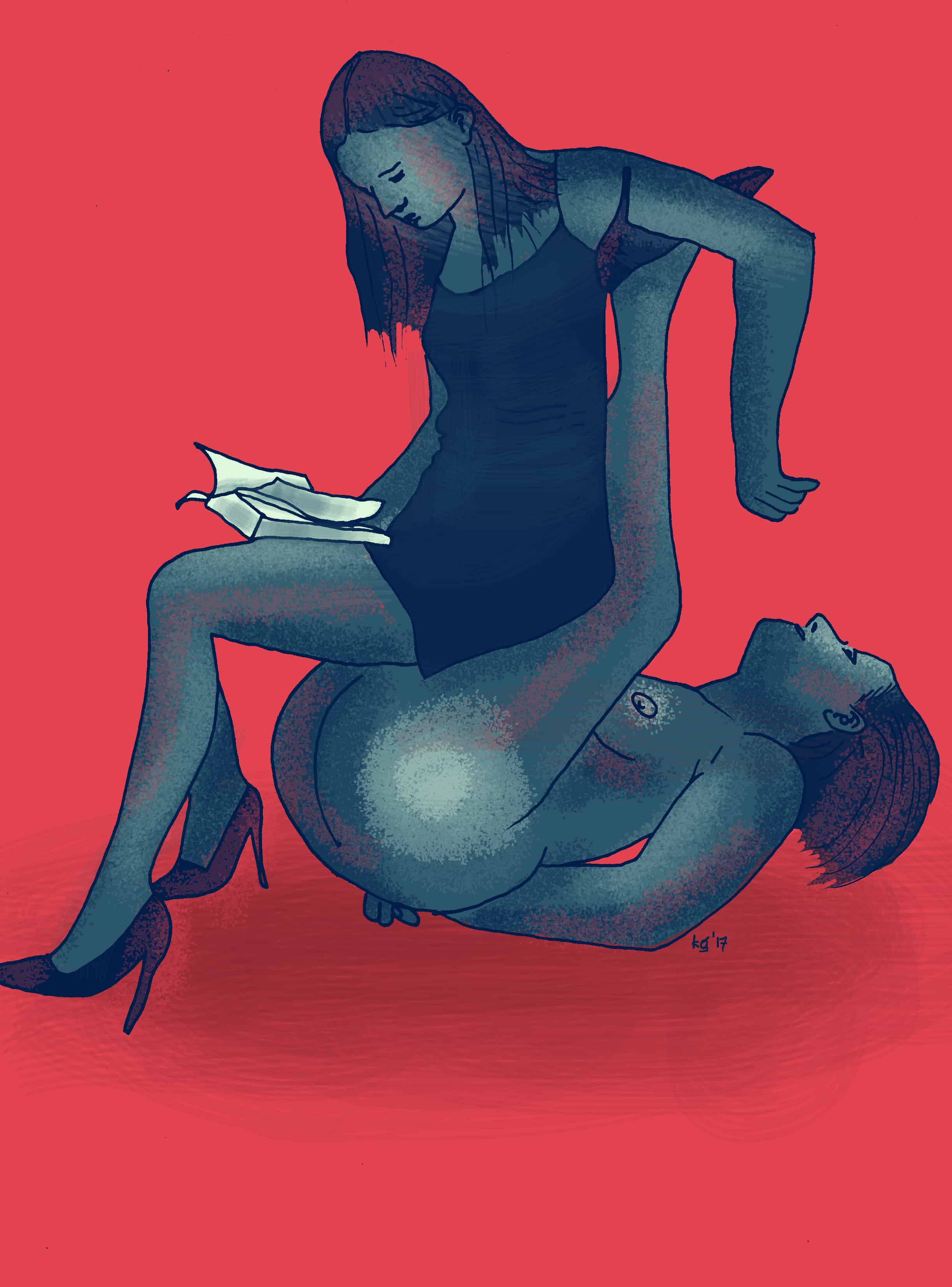 I am friends with a woman at work, but we don’t really talk outside of work. She is in her late forties/early fifties, and she is our bookkeeper. As far as I know, she has been working at our office for about fifteen years. From talking to her, I also know she is going through some difficult times personally—a divorce, and other family troubles. A few days ago I overheard our manager saying they are going to let her go in February because of her poor work performance. I am her friend, so should I tell her? I think it’s going to be hard for her to find another job, and I feel like I should give her some warning.

I can understand that you would want to protect your friend by giving her a heads-up about being fired. But here’s the thing: it’s really none of your business. You overheard the conversation by accident, and you don’t know any of the details. Management has decided to fire her because of her “poor performance.” Sure, that could be related to the personal difficulties she has been going through recently, or it could be related to years of less-than-stellar work on her part. You don’t know what her work performance has been like, because you aren’t her manager and you’ve not privy to that information.

Further, what good can come of you telling her? It will not stop her from being fired. Yes, it may give her time to come up with some bargaining chips, but you don’t know that. It’s a shitty situation, and the shittiness is exacerbated by the fact that it can be very difficult for older adults to find jobs because of age discrimination. But she should get a decent severance package after working at your company for so long, and hopefully a good reference as well. In short, I don’t think you owe it to her to tell her ahead of time, mainly because it’s not your news to tell.

I am an outspoken feminist. I’ve spent my life working for the cause of women’s rights. Recently, I’ve become interested in being more “submissive” in sexual relationships, with partners of any gender. I feel conflicted about this as a feminist, because it feels wrong to be turned on by being ordered around, held down, etc. How do I reconcile that with my feminist beliefs? I feel like I can’t truly call myself a feminist if I am turned on by things that degrade or oppress women.

I think there are two aspects to this question: what it means to be a feminist, and the ethical/political implications of sexual practices.

Feminism is the belief that women’s rights are equal to those of men. These rights are at once political, social, and personal—ranging from the right to vote to the right to end a pregnancy. We have spent centuries fighting for the right to decide what happens with and to our bodies in terms of sex, reproduction, medicine, and aesthetics. In that respect, we are very lucky to live in a country that legally and socially honours women’s rights as highly as it does (with First Nations women’s rights being a glaring exception).

So, does being interested in dominance/submission contradict your belief in feminism? Your belief that men and women are inherently equal? I don’t believe it does. We’ve fought very hard to get to a place where women can have sex with whoever they want, for whatever reason, without having to feel like shit about it. It is your hard-won right to do what you want with your body (caveat: between consenting adults). Engaging in sexual practices that interest you, and seeking out sexual pleasure purely for pleasure’s sake, are part and parcel to enacting that right.

Having said all that, the dominance/submission thing can be tricky. Whether we like it or not, there are political implications to our sexual behaviour. You mention that you feel uncomfortable being turned on by things that “degrade or oppress” women. So we need to figure out if and how dominance/submission might degrade and oppress women.

I only know your age and that your gender is non-binary. So ask yourself, does it feel more/less “wrong” to be submissive to certain genders? Why or why not? Do you feel more/less vulnerable being submissive to people of particular ethnic backgrounds, economic statuses, etc? Do a bit of mental acrobatics as a way of sussing out what your particular vulnerabilities are so that you can understand them better and keep yourself in situations that are safe. Open some dark closets in your mind and heart, and shine light on things that you didn’t even know were hiding in there. Knowledge is power, and when playing with sexual power dynamics, it is vital that you feel strong and self-assured.

This may sound seriously un-sexy, but one way philosophers have approached sexual ethics is by viewing sexual relationships as contractual relationships. In short, sex can be seen as “morally permissible” (which does not mean “right” or “good” or “recommended”—it just means it is not immoral) if two (or more) rational, autonomous parties agree to engage in the act freely, without force, fraud, or explicit duress. That’s a pretty major definition of informed, voluntary consent, but it’s a good one because it encourages us to think about what informed, voluntary consent really means. Some feminists would argue that no woman is capable of giving her informed, voluntary consent, because women have been conditioned (through sexism, through paternalism, through pornography) to consciously and unconsciously meet the sexual needs and preferences of men. Other critics of the contractual approach argue that parties can still be radically unequal in terms of bargaining power and vulnerability, even if they enter the sexual “contract” without force, fraud, or explicit duress.

Further, though consent supposedly gives you the moral “okay” to go ahead with sex, that alone does not ensure that specific sexual acts themselves—the terms of the contract— are moral or advisable or good for you. For example, Person X could theoretically give their informed, voluntary consent to participate in a sex act with someone during which they are whipped and cut. Yes, they gave their informed, voluntary consent, and so theoretically the sex is morally permissible. But are the terms of the contract—the whipping and cutting— moral/good/advisable/laudable acts? That’s the question that those who engage in more hardcore BDSM need to grapple with. And that’s why it’s so important to know thyself. The example I gave is a bit extreme, but you can substitute any act or spoken word as a way of testing it for yourself. Some words are just as violent as whipping and cutting.

What if you’re still not able to decide if a specific act is morally good? YOU’RE IN LUCK. A brilliant Prussian-German philosopher named Immanuel Kant came along in the late 1700s and a) changed the course of modern philosophy, and b) helped us answer our BDSM dilemma. Kant said that it is morally wrong for one human to treat another solely as a means to an end. He believed that all humans are ends in and of themselves— we are not objects, we are subjects, and in our subjectivity we are all equal. To treat any human as merely an object (i.e., as a means to an end) is—in Kantian ethics— one of the worst acts you can commit. So, to avoid this, he argues that contracts must not be exploitative: they must be reciprocal, and each party must realize that there is a mutual obligation to treat the other party as a subject with needs and expectations, not as an object.

With regards to the dominance/submission you’ve engaged in, do you feel that this Kantian criteria is being met? Are you being treated as a subject, with needs and expectations and feelings, or do you feel objectified? That can be a good test for you: when you feel things are tipping towards objectification and are becoming non-reciprocal, then stop and re-evaluate. The contract has become morally bankrupt at that point.

Okay, so I’ve waxed poetic for about nine hundred words. OMG. Time for a nap. Don’t let what I’ve said take the joy out of sex. It is all food for thought, and it’s meant to be the groundwork that you lay so that you can then make easy, spontaneous decisions when sexual situations arise.

[For this answer, I drew on: “Sex” by Raymond A. Belliotti, in Peter Singer’s A Companion to Ethics]