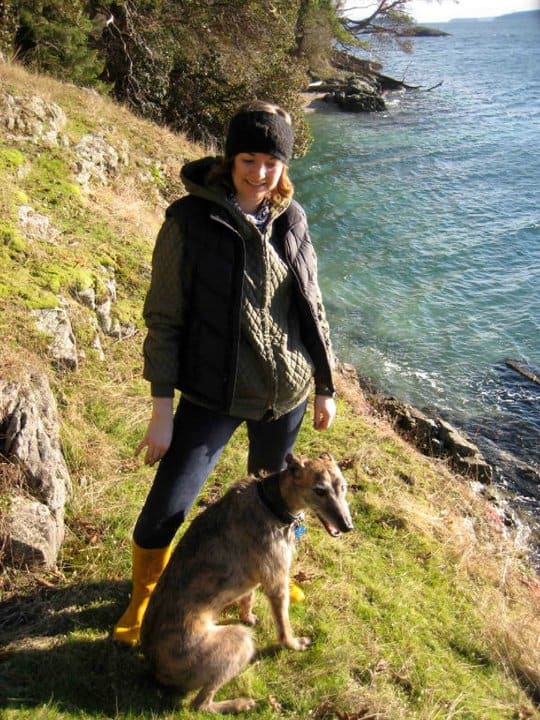 Part 1: How I wanted to be a fashion editor, then didn’t

The first time I saw a fashion runway, I was so excited I cried.

Then I spotted Glen Baxter sitting across the runway from me, and a sense of surreality set in. It was at an industry party, and when a close friend introduced me to Jeanne Beker, the grande dame of Canadian fashion journalism said; “Emma Yardley? I’ve been wanting to meet you for a while.” My heart actually stopped beating for a full five seconds. 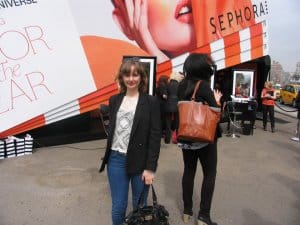 On a press trip to NYC to check out this Sephora popup shop. I was there for nine hours and it was glorious.

Being a fashion editor is the best job in the world, but it’s also the worst. As an early-adopter junkie, the excitement of being on the vanguard of trends — seeing and reporting on what’s coming down the style pipeline before anyone else — was the best the high I could ask for. I was invited to see collections seasons before they hit stores; I went on press trips to New York to interview industry heavyweights; I was sent samples of not-yet-released makeup to test out… and I fell madly in love with my day-to-day tasks.

But therein lies the problem — I loved so hard, it began to hurt. Call it a case of bad timing, but the year I moved to Toronto was the same year the global economic crisis hit, and Canadian media corporations began to panic. I was six weeks into my first contract when the entire company was asked to gather on an empty floor of our Sheppard Avenue building, where we were told that they were closing a dozen or so once-successful publications and laying off hundreds of employees.

Everyone was in shock, but it was just the beginning.

By year two, I had survived, witnessed and been a victim of so many rounds of layoffs that any time an executive called staff into a boardroom, I had already figured out what I would take from my desk (Aveda hand lotion) and what I would leave behind (my dignity). Short contracts without benefits, double (or triple) the duties on a low five-digit salary, unpaid overtime all the time — these became the norm.

We all accepted it, because styling a fashion photo shoot is ridiculous amounts of fun and writing about the 10 best mascaras is an absolute blast — it’s also the only thing I ever truly wanted to do. Bouncing from one contract to the next did have two major advantages: I worked and learned about every type of media outlet — magazine, newspaper, website, multiplatform, startup — and reported on a variety of lifestyle beats (fashion, beauty, home, family, food). And each new newsroom came with a whole crew of coworkers whose friendships became my anchor in the midst of an unstable industry. 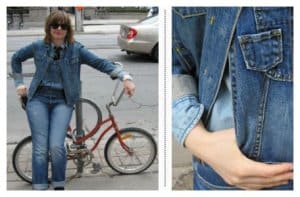 Shooting some silly street style photos for a story on what we wore to Toronto Fashion Week. Wearing triple denim before double denim was cool.

If I’ve learned anything from attending hundreds of fashion parties and beauty-product launches, it’s this: be kind and be you. For a girl who didn’t own a pair of heels until age 27, walking into a room full of fashion editors — dressed to the nines, drinking San Pellegrino and not eating beautifully prepared canapés — is one of the most intimidating experiences I could have had. Then I realized that they’re just as unnerved as I am (and that they have a pair of Gap ballet flats stashed in their bags, too).

The women and men who produce the fashion magazines you read every month, write those features for the Saturday edition of your favourite newspapers and update your bookmarked sites are some of the most tenacious, creative, hilarious and hard-working people I’ve ever met. They are the real reason I loved my job as much as I did.

They deal with daily editorial deadlines, demanding managers, inflated egos, over-stacked schedules and raise-stalled positions with grace and gratitude. But as a friend who works at a popular fashion magazine once said, “You can’t pay your rent with press trips to New York.”

Everyone has their limit and my body let me know when I had reached mine: I began breaking out in full-body hives. It started happening a few months after the women’s lifestyle website I had been at for nearly three years was shut down by a media giant that had only just purchased it the previous year.

The dismantling of this sweet, profitable online space (and team that had built it) broke my heart and I’m not sure I ever fully recovered. Red, itchy welts began appearing all over my body. When I dried myself off after a shower; hives. When my husband lovingly rubbed the top of my hand; hives. And when I  put on a sweater; hives.

After a long series of allergy tests, dermatologist consultations and very expensive food-sensitivity testing, I discovered nothing. And now on top of the hives, I’d also developed a case of chronic aggravated acne and, after a year of trying to get pregnant, officially hit that dreaded “infertile” mark.

I came home to Salt Spring Island for a week over Christmas, and, as my mum told me later, I “looked like hell.” My parents booked me an appointment with a homeopath who, before telling me my adrenal glands were in fatigue (i.e. my body was no longer properly handling stress), asked me a rather odd personal question.

“What would the feeling of moving back to the island look like to you?”

I responded, tears beginning to trickle down my face, “Falling backwards into a warm hug.”

And there it was. In my mind, I now saw a different sort of runway. But my tears of joy (and relief) were the same. 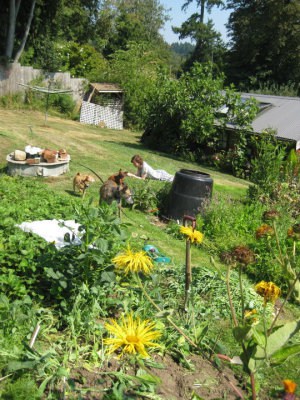 Reading in my parents’ backyard in my pyjamas because that’s what one does on Salt Spring Island in the summertime.

Next week: On carving up one life to carve out another and how much it can actually suck.