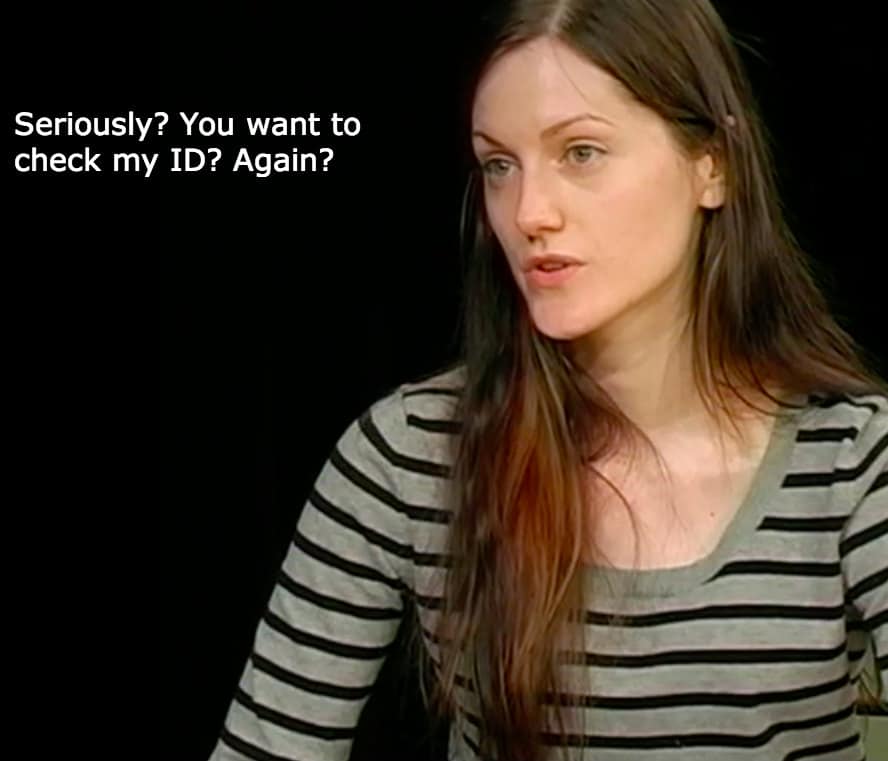 Forever Young: The Trouble With Looking (and Sounding) Younger Than You Are

The other day I was asked for ID at the LCBO. I acted thrilled because I’m 31 and being asked for your ID at my age is (supposedly) one of life’s little blessings.

“Really? You want to see MY ID?!” I asked, feigning surprise, while handing over my driver’s license.

The clerk looked at my license and then at me. “Are you telling me this is the first time you’ve been asked for your ID?” He asked, not buying my incredulous ‘tude.

The truth is I’ve been asked for my ID boatloads of times since becoming the age of majority, (which was 14 years ago) because I look a great deal younger than my actual age. I’ll refrain from calling myself “baby faced,” though, due to the lack of people pulling at my cheeks, and because I think the people who are called “baby faced” actually have a face that should belong on a baby; I have a face that belongs to someone between the ages of 18-26 (so I’ve been told).

And it’s not only how I look, it’s how I sound, too. A guy recently tried to pick me up in a Starbucks because of my “cute” voice. In my opinion, I sound like a subdued Canadian cross between Mindy Kaling and Alexis Bledel (a.k.a. Rory Gilmore) – you know, girly, choosy, the kind of voice you’d expect in a Pixar movie.

You’re probably rolling your eyes and guffawing at my so-called “problem” of being mistaken for a 20-year-old, especially since we live in a society that consistently tells us how aging is bad and not sexy and everything is “anti-aging” this, “anti-aging” that, but reverse ageism is a real thing too, people!

I can’t tell you how many times I’ve been dismissed, underestimated or not taken seriously because of my Benjamin Button-like exterior.  I get a lot of “kiddos” thrown at me, as well as “you’ll understand when you’re older.” Someone even had the audacity to ask me “what’s the 411 on Hunter Hayes?” and I was like, “Who the fuck?!”

Prospective employers have patronized me in job interviews with “We’re looking at someone with a fair amount of experience” before bothering even to glance at my chockful-of-experience resume. Bartenders have eagerly poured drinks for my friends before turning to me and demanding to see an ID. Vendors often give me a hard time whenever I ask to buy a lottery ticket.

Then there was the time when I was at a wedding and one of my parents’ friends said to me, “Don’t worry. Sally waited until she was 27 to get married. You’ve got plenty of time.” I was 30.

But the absolute worst happened a few days ago. I was at my parents’ house and I answered their landline and upon hearing my “Hello?” the telemarketer promptly asked if either of my parents were home. WTF. I’m a grown-ass woman – I could have a mortgage! I could have a landline! I could do some lame-ass survey! But, oh no. My age says “adult” but my voice says, “My Mommy’s not home right now. Can I take a message?”

(OK, maybe I can give a pass to the telemarketer since he didn’t actually see me. I’d like to think that maybe if he had, then he would have said instead, “Madame of the house, I presume?”)

More often than not, I don’t mind looking a little younger. I’ve enjoyed friendships with people of all ages, I can get away with wearing denim shorts and tight pants without looking like I’m trying too hard to be “hip” and, a few years from now, when my peers are getting Botox and trout pouts, I’ll be like Cindy Crawford (have you seen Cindy lately? The woman does NOT age).

But I would be lying if I said that looking younger, and occasionally being infantilized because of my appearance, does not make me a tad bit insecure. Sometimes it causes me to act less confidently and become hyper aware of others’ reactions to me. Other times it causes me to be defensive and then I try to put on a weird, deeper, more “adult” voice, which hurts my throat and makes me sound like Meryl Streep in August: Osage County, and it’s really not a good scene. I know this insecurity is my issue, though, and one that I need to embrace more because this is me, and this is how I be, so I might as well walk with assuredness and believe in my aptitude for professionalism.