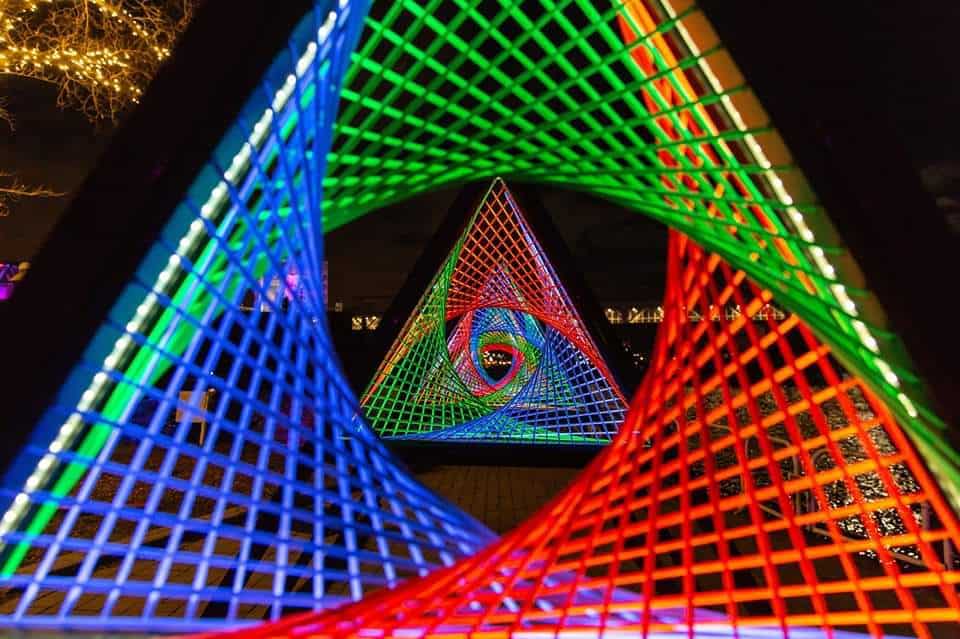 Free Events in Toronto This February

Harbourfront Centre presents the exclusive Canadian debut of a public installation from Colin Kaepernick’s Know Your Rights Camp. The former NFL quarterback, who began kneeling during the national anthem in 2016 to call attention to issues of racial injustice and inequality, has selected freedom fighters who represent his organization’s beliefs and pillars, and have collectively transformed their cultural power into a non-negotiable demand for Black liberation.

Over 20 installations from creators of all artistic streams will be on display at Ontario Place’s West Island this month as part of the third annual Winter Light Exhibition. This year’s installations follow the curatorial theme of “Cocoon” and include everything from papier mache mammoths to a field simulation and a three-dimensional optical illusive cocoon. There will also be community bonfires, paint classes, and a snack shop open Fridays through Sundays.

Expect a wide variety of uniquely designed ice sculptures and other fun winter activities at the 15th annual Bloor-Yorkville Icefest! This year’s “Awesome 80s” theme will transform the neighbourhood into a one-of-a-kind display of over 70,000 pounds of ice sculptures inspired by the music, art, film, and fashion of the decade. Warm up to the smooth sounds of DJ Bellosound inside the Icefest Lounge, snap at picture at the Icefest Photo Booth, take part in a scavenger hunt, and check out one of the live ice carving demonstrations.

Hot Docs Ted Rogers Cinema is rolling out the red carpet for a free broadcast of the 92nd Academy Awards. Catch all the action live on the big screen with hundreds of other movie lovers – from the star-studded arrivals and dazzling musical numbers to the surprising speeches and political moments. Reserve your free ticket (maximum two per person) here.

Ears, Eyes, Voice features 41 works that illuminate the stories of Toronto’s diverse Black communities; from backstage with Peter Tosh and Tina Turner and early Caribana images to documenting farm workers, capturing images of political protests against the Toronto police and local anti-apartheid protests, to local Ebony fashion shows and the crowning of Miss Black Ontario. From politicians and community members to entertainers and activists, the show reveals the great swath of formidable people who have helped shape Toronto.

Harbourfront Centre wraps up another season of DJ Skate Nights this month with DJs Tasha Rozez and Randee Savage, who will keep you dancing on the rink with a set of reggae sounds. Skate and helmet rentals are available on site.

It’s your last chance to hit the Bentway Skate Trail before it closes for the season. Spend Family Day skating around the 220 metre, figure-eight skate trail with your family and friends followed by a drink at the skate-side Corona Après Patio. Skate and helmet rentals are available on site.

Now in its sixth year, Winter Stations is an international competition and exhibition that transforms the unused lifeguard stations along Woodbine Beach into whimsical works of winter art. This year’s winning entries include installations by artists from Austria, Scotland, Spain, and Toronto’s Centennial College.

Enjoy free general admission and extended hours at the ROM’s 3rd Tuesday Nights Free! Visitors will get complimentary access to the ROM’s 40 permanent galleries and can discover museum highlights with free tours at 6 p.m. and 6:30 p.m. Access to feature exhibitions like Bloodsuckers: Legends to Leeches and Wildlife Photographer of the Year is specially ticketed.

Think you know everything there is to know about Buffy The Vampire Slayer? Put your knowledge to the test at the Gladstone Hotel’s Buffy The Vampire Slayer Trivia. Hosts Derrick and Allan will determine who the ultimate Buffy fan is in all of the Hellmouth with a series of questions about the TV show (that means nothing from the movie, novels, comic books, or Angel series).

MOCA is opening its doors for free as part of its monthly Community Sunday event. Enjoy free admission all day while checking out the museum’s current exhibition, Archiving Eden: Exchange by Dornith Doherty – an installation that invites visitors to remove x-ray images of seeds from its walls and replace them with transparent envelopes containing actual seeds.

How much do you need to make in order to live in Toronto? Posted on February 4, 2020

Free Events in Toronto This February Posted on February 3, 2020