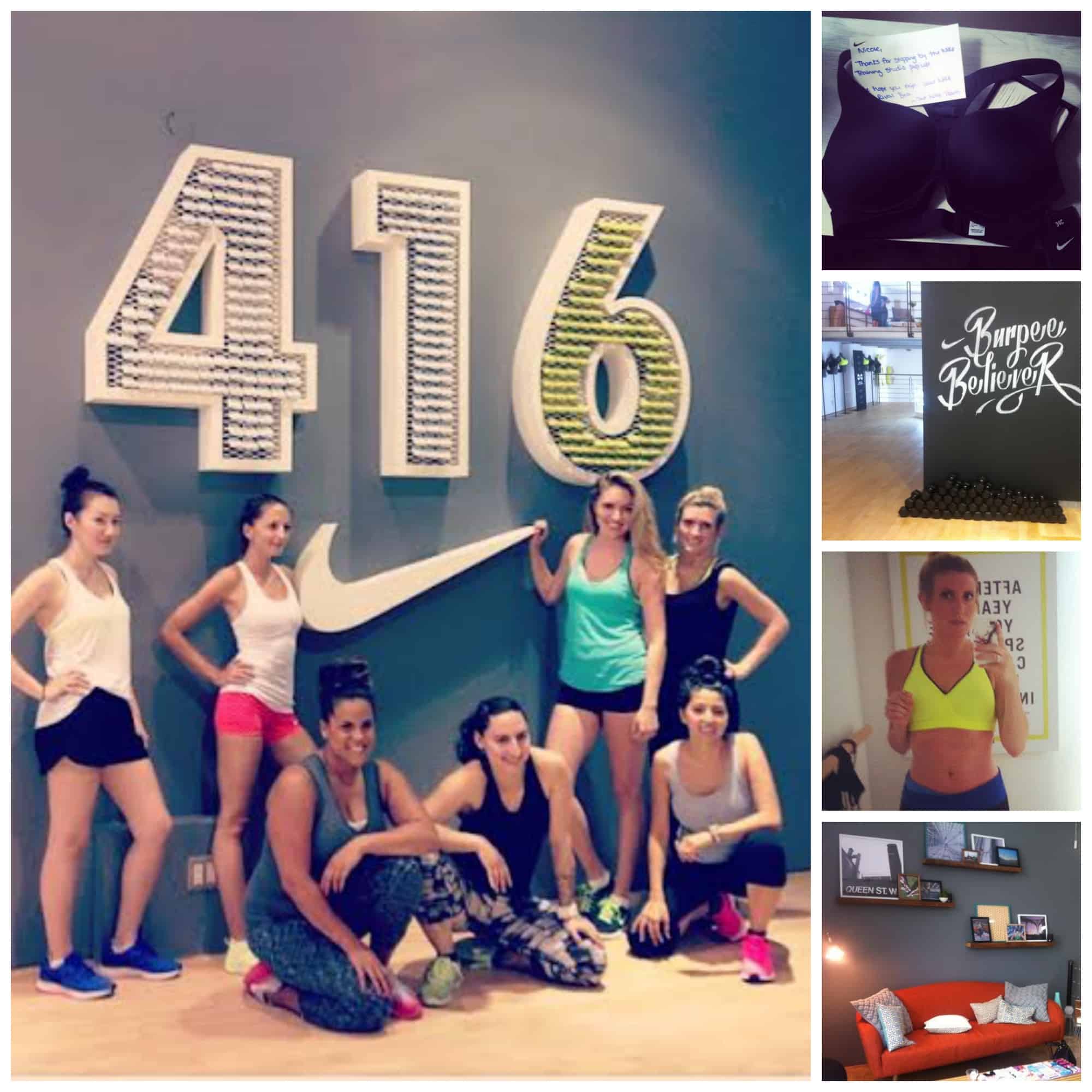 Getting Fit And Fitted With Nike

Thanks to Oprah, most of us know that 80% of women are walking around wearing the wrong sized bra? But have you ever thought about the fact that that applies to sports bras, too? An ill-fitting sports bra could restrict your full potential during a workout?

Recently, I was given the opportunity to test-drive Nike’s revolutionary new sports bra, The Nike Pro Rival Bra, at Nike’s Toronto pop-up shop on 548 Richmond Street West. I will admit that in my 28 (almost 29 – gross) years, I have never been fitted for a bra. I have always run on the assumption that I was an A cup masquerading as a B. As I walked into the pop-up shop (and temporary Nike Training Club (NTC) studio), I was slightly nervous. What if they measured me and simply just said “Sorry. We don’t have training bras here…. you could try Sears.” Or, what if the workout was like my Jillian Michaels experience? That was intense and I hadn’t even eaten yet. Thankfully, the cheery staff put my mind at ease and the fitting went far better than I expected. After measuring my chest region and inputting the information into her tablet, the beautiful young staffer turned to me and said “So, according to the calculations you are a 34C.”

Apparently, I possess the amazing skill of making my boobs look smaller than they actually are. Just what every girl wants. Alas, who was I to argue to Nike? I strapped that bad boy on and my newly bountiful breasts and went to get my sweat on. During my workout (which I will get to momentarily) I noticed that the girls were fully supported. The bra fit like it was moulded from my chest. It did not ride up and the straps stayed put. The Pro Bra collection comes in five different bras, which are designed for different levels of support (I am more of a jogging and yoga kind of girl). Delivering the highest level of support, the Pro Bra series comes in 25 sizes, ranging from 30B to 38E.

I put the bra the test during an NTC class (which is based on the NTC mobile app). Leading our workout was the lovely Paluna Santamaria. Paluna was equal parts ball-buster and fantastic cheerleader as we pushed through each set. The class consisted of both endurance and strength training. After 45 minutes we were sweaty but felt accomplished. Everyone agreed that we felt completely supported the entire time and then we all gave each ‘boob fives’… or, as I heard people saying, “that weirdo with the leg sweat kept trying to bust bump me.” Potato/Patato.

The pop-up shop on 548 Richmond Street will be open until July 31st. Book a bra fitting appointment and check out an NTC class. After the 31st you can keep the momentum going by joining a complimentary NTC class at the Academy of Lions (64 Ossington Ave).