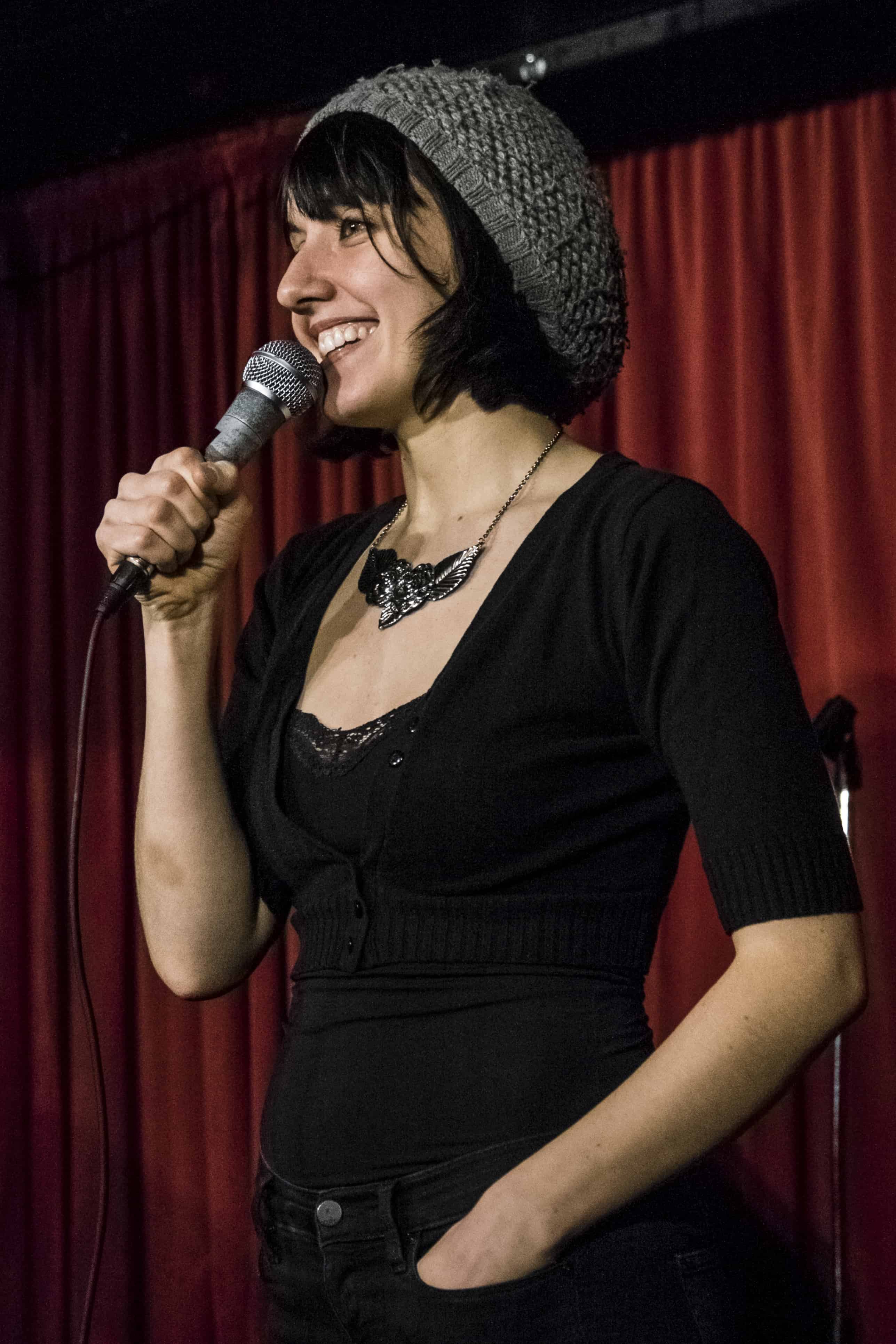 Let me begin this piece by clarifying something right off the bat.

For the last five years I have been creating art specifically with the intention of entertaining any person who identifies as a woman.

HOWEVER, if a person who identifies as a man likes it? Great. I am not purposely coming up with ideas that I think will repulse and disgust and revolt men. I am simply coming up with ideas and those ideas happen to often reference my experiences as a woman, as a bisexual woman, as a feminist woman, and as a woman who menstruates, because not all women do. Once again, I hope that every human being I encounter thinks I’m the most hilarious, the most brilliant, the most consistently perfect artiste they’ve ever witnessed, and I hope those human beings are also men. I honestly do. I hope they find me fascinating and educational and enlightening. I hope they generally love what I’m inventing. But if they don’t? I couldn’t care less.

‘Cause I don’t invent anything with them in mind and that’s extremely clear if you take a gander at my resume. I’m a comedian who tells many a joke about my radical feminist perspective on the world and my bisexual bedroom adventures and the misogyny of shark sex. I co-host and co-produce a weekly podcast about periods called The Crimson Wave. I also co-host a weekly stand-up show that’s feminist friendly, LGBTQ positive, and doesn’t allow a single rape joke told on stage. I am currently pitching a web series called Killjoy which is about four funny female friends who battle gender inequality, confront oppression, and are rightfully pissed off about injustice. I write pieces about my personal life which is consequently a woman’s life, thus my readers tend to be of the lady variety ‘cause they see themselves most within my words.

It’s quite obvious that my target audience is women and I am not apologetic about that fact, although in the past I have been. When anyone dared to question the content of my female-centered craft I would instantly begin to worry that I wasn’t appealing enough to man-persons, specifically straight, cisgender man-persons. I have been told repeatedly that I am being too niche with my humour. That “girl comedy” as a genre is never going to be mainstream successful. Friends, colleagues, and boyfriends have informed me that women as a group are not a “real” audience. You gotta pepper at least a few dudes in there if you want to be taken seriously by a male comedian who exclusively discusses how his penis functions and how his girlfriend is dumb and how pussies smell so frickin’ weird. THAT’S mainstream. THAT’S real. THAT’S inclusive to EVERYONE. But me talking about my ovaries? That’s niche. That’s alt. That’s uninviting to people (and people are only men). That’s not legitimate comedy.

For years I was made to think that if a man didn’t laugh at my joke, it wasn’t funny. If guys weren’t sharing my videos as much as girls were, I was just pandering to female sensibilities. If a boy heard me say “menstruation” and screamed “Ew! GROSS” then I wasn’t doing my job of appealing to the masses. I would rethink my entire career if a local bro commented on my article by saying “God. Why do you hate men? You’re so ANGRY. You need to relax. We aren’t all like this. I’ve met a lot of crazy chicks who do the same shit. Were you dumped recently? Feminists are cunts sometimes. Stop sucking every dick and you’ll get a boyfriend. If you’re into it, I’m free Saturday. Let’s get a drink and if you say no, then you’re an ugly bitch that I don’t want anyway”. That is some solid criticism to take into account. This local bro could have been a reviewer for all I know. Maybe he was the head of Comedy Central? Or owns Warner Bros.? Or he’s… god?

I have been given advice dozens of times around the lines of “You’re good, but you’d be stronger if you BRANCHED OUT and stopped LIMITING YOURSELF and occasionally TALKED ABOUT OTHER STUFF” AKA I quit it with the constant WOMAN material. I cease and desist casting females as the leads in everything I make. I switch it up and write about something other than gender inequality and the politics of heterosexual romantic relationships. I would be more respected if I got the stamp of approval from the manliest men in town. What I was doing wasn’t valid under the eyes of the patriarchy because I was giving women more power than they deserve. I was assuming they had brains and a sense of humour and the ability to observe and enjoy artistic projects. Also, I was predicting that these women audiences had actual money to spend of their own and were attracted to comedy that discussed THEIR experiences, as opposed to the experiences of a straight, cisgender male comedian named Craig who doesn’t get why hot babes won’t swipe right on his face on Tinder, even though his dick is SO big.

They’d tell me that I wasn’t a true comedian if I continued on with this charade of feminist repartee. I wasn’t good unless I was attempting to fit into the male gaze. I wasn’t hilarious unless I was playing the ignorant, up-for-anything sexually, adores men ALWAYS, extremely offensive, high-pitched voiced, super-cute girl which is a popular persona that bros applaud and celebrate and encourage. A girl making rape jokes is gold in their books, but my ranting about online trolls is annoying. No matter how many female audience members are keeled over hysterically giggling. No matter how many women come up to me after the show to say I was their favourite. No matter how many views or likes or favourites I receive. No matter how much press I get or if I was paid as a professional for the time I did or if I was specifically hired because of the female content of my act. That’s all irrelevant. That front row of ladies don’t exist.

But, they do exist. They are tangible specimens. They have functioning minds. They understand what laughter is and how to elicit that within their own bodies. They do love comedy, just maybe not the kind of comedy they see at typical clubs, where their gender is the punchline. Where sexual assault is a goofy bit. Where they’re signaled out, ridiculed for not smiling, and then asked to show the comic on stage their tits. Maybe they’re not as into that. But they do exist, and they definitely have cash to spend and a want to be entertained and they consume comedy in large numbers. Women are HALF the population. That’s a lot of people, if you consider women to be people that is. Female audiences ARE real audiences regardless of what the patriarchy wants to believe. We’re real and we have money and we know what we like.

A man’s sense of humour, taste, and subjective judgement does not solely define the quality of art, television shows, podcasts, writing or comedy. Women have to be inclusive to men but men don’t have to give two shits about women in regards to entertainment? How is that equality? It’s not, which is why I create content that is marketed towards a group of people who have been cast aside since forever. There is a demand for female-centered comedy and somebody needs to provide it. I am one of those providers. I am one of many. I consistently meet that demand and I am proud of the work that I create. If what I says pisses off hoards of sexist men who yell “GROSS” when they hear the word “menstruation” then fine. I’m okay with that. I’m more than okay with it. I feel great about it. If I’m pissing off misogynists, I’m doing an excellent job and saying the right things. And if some dudes like me, even better. But I couldn’t care less. ‘Cause if a man doesn’t find something funny that doesn’t mean it isn’t funny. Period. Pun intended.