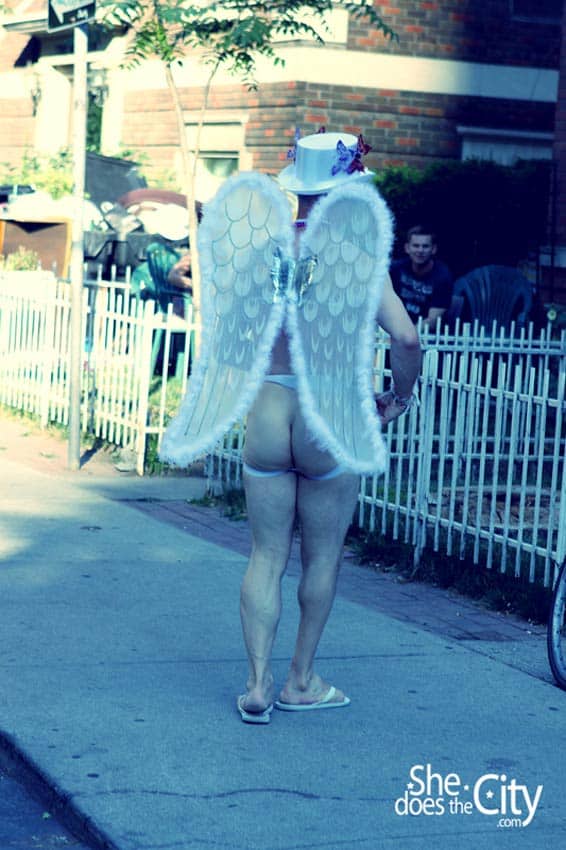 "Let’s get real – this motion is about shaming and regulating our bodies."

No Prudes at Pride, Please

Trustees of the Toronto District School Board are asking City Hall to ensure that there will be no nudity in the city’s annual Pride Parade, as they’ve chosen to include a float this year. According to the motion put forth by trustees Sam Sotiropoulos, Irene Atkinson and John Hastings, the nudity at Pride “raises legal concerns and implications” for “TDSB students and their families.” Sotiropoulos also stressed that Pride is supposed to be a family-friendly event. And that’s where he lost me.

Why is it that family-friendly and nudity are considered to be mutually exclusive? I’m not saying that everyone needs to be naked all the time but what are we teaching our children if we say that nudity is obscene and X-rated? According to Sotiropoulos, this motion is simply about enforcing the city’s anti-nudity laws, which usually apply during the rest of the year. It’s an unspoken custom that during Pride this law isn’t enforced. But let’s get real – this motion is more about shaming and regulating our bodies.

For anyone who hasn’t been to Pride, let me explain a few things. There is very little full nudity. There may be guys in leather jock straps with their asses on display and lots of women exercising their right to go topless, but full top-to-bottom nudity is a rarity. On average I see maybe three nude men (yes, it’s always men) the entire day. And while it’s a little jarring at first, I always go back to the same thought: this wouldn’t be so weird if our society was more accepting of nudity. What does it say about us that so many people view a woman breastfeeding her child as obscene? Why is it that some find the male penis so offensive that they can’t even handle seeing it in a painting or sculpture? The more we try to cover our bodies up, the more we reinforce the message that our bodies are obscene and shameful. Right now, bodies are often depicted in a piecemeal manner. We see sculpted abs, toned arms, muscular thighs. But outside of pornography or art, we rarely get to see a nude human being from top to bottom, a whole person.

I truly believe that if nudity were more common it would benefit our youth. If we exposed our society to more nudity I think that maybe our children (and most adults, too) could learn the following things:

a) Everyone has imperfections. No one looks like the people in magazines and that’s awesome!

b) Being nude is not the same thing as being sexual.

c) Bodies aren’t a big deal. We all have them. They’re all similar and yet all beautifully unique.

And that’s why I hope that Pride continues to be an event where nudity is normalized and shame is minimized. Let’s start treating our bodies with respect and stop treating them as obscene objects. I most likely won’t be going nude at Pride this year (hot sun + chubby thighs = chub rub to the extreme!) but I am totally in support of those who choose to bare all. Go ahead, make us proud.