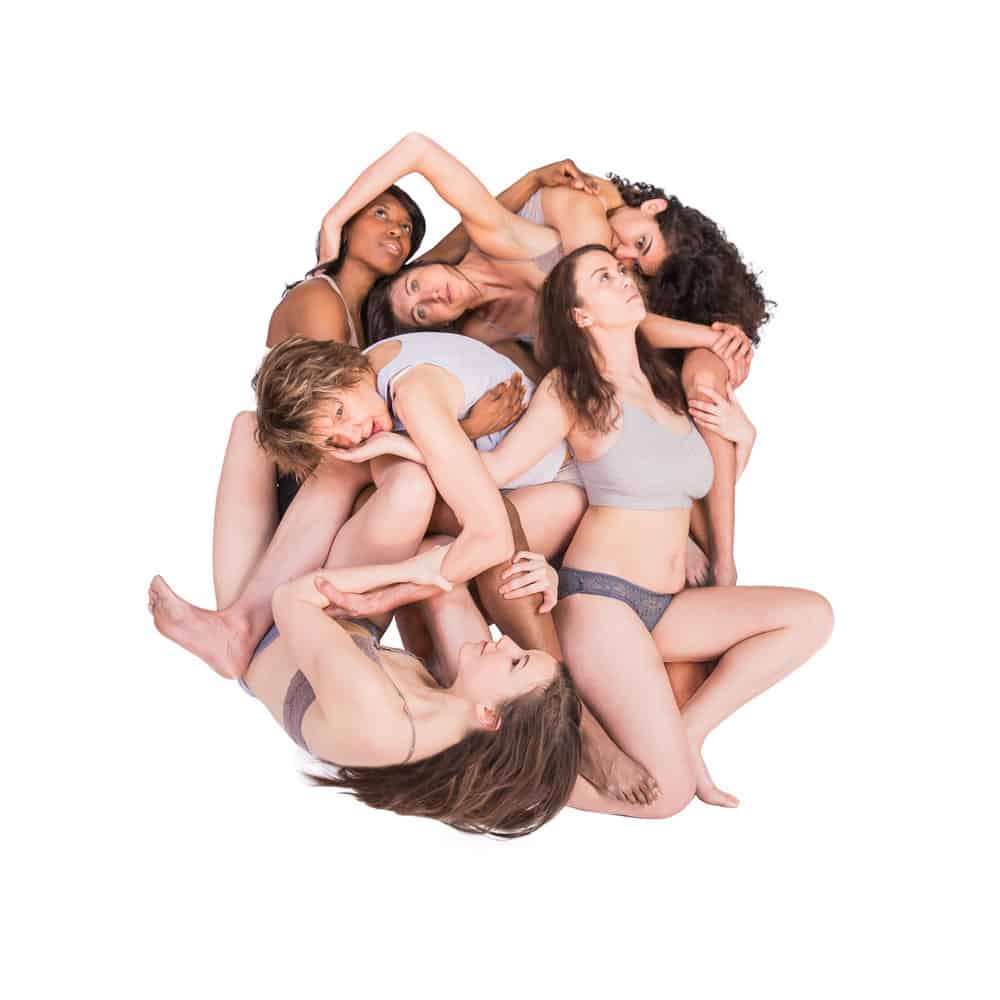 Amy Nostbakken and Norah Sadava are the co-directors of Now You See Her and co-Artistic Directors of Quote Unquote Collective. Now You See Her explores the ways that women are made invisible in our society, and asks: Why and how do we allow our power to disappear without a fight?

We asked them about the play, this idea of women becoming invisible, and what they hope audiences glean from the performance.

SDTC: How did this work evolve? Where did the initial inspiration come from?

AN & NS: When we premiered MOUTHPIECE in 2015, a woman in her sixties came up to us after the show and said, “I don’t remember exactly when or how it happened, but at a certain age I realized I had become invisible.” This image struck a chord within us, as did the response from the many women in the music industry who came to see our play. They responded in such a visceral way: “Yes! I feel THAT.”

But it’s even worse in our industry (possibly the most misogynist art form of them all). The two of us simultaneously had the idea to create a piece that revolved around a rock band. We wanted to put female musicians front and centre—plugged in. LOUD. We wanted women taking up space in their own individual ways while expressing what it’s like to be made small. We were calling it a rock opera at that time.

As well, the inquiry into MMIWG hadn’t been initiated yet, and the stories of Indigenous women going missing were not being focused on in the media. We felt that if we were going to speak about the erasure of women, it was important to collaborate with Indigenous artists to draw attention to this very literal way that women are being wiped out, and how the rotten white colonial settler patriarchal system is managing to convince the public that this national crisis doesn’t matter.

So we started writing and looking for artists to collaborate with on the project. It soon became clear that it would be near-impossible to find actors who were also rock and roll musicians, so we prioritized the actor/collaborators, and it began to diverge from a rock opera into more of a play with music.

As we worked further we realized, Shit. There are so many forms of disappearances—both literal and figurative—women experience every day that we need several distinct voices to voice them. So it has evolved into a piece with six narratives—told in different ways stylistically—wherein each character is being erased in many ways. There’s still some rock and roll in there though.

What are the ways that women “fade from sight” in our culture?

While progress is certainly happening in regards to women’s rights, there are countless ways in which women are still being made invisible, unseen, unheard, or simply devalued in 2018. All you have to do is look at the headlines. A judge gets nominated [to the Supreme Court] despite allegations of sexual assault from a brave woman who risked ruining her life to speak up.

Abortions are still not available in certain provinces in this country, and women are forced to travel great distances at great expense to exercise their right to choose.

The statistics of women in positions of power aren’t increasing; look at our own industry, where, according to Equity in Theatre, women in Canada’s professional theatre industry have not surpassed the 35% employment marker. Our stories are not being told, which means our voices are not being heard.

The rates of eating disorders in young women are only growing, an illness that literally makes women disappear inch by inch.

Somewhere in the ballpark of four thousand Indigenous women are missing in this country and the system is making it almost impossible for their families to look into finding any answers.

Serena Williams is stripped of her humanity when she is depicted in a cartoon that accentuates her Blackness as being synonymous with anger, just for expressing the same sort of emotion that her white male counterparts are given full permission to assert.

What was the biggest challenge you faced in mounting this production?

Co-writing a project with six voices who are given equal space and time. This was a major shift from any work either of us have ever made before. Yes, we have devised plays, but never like this. Attempting to build a platform from which multiple voices can speak in an honest and safe way is not easy. It’s beautiful, it’s a laugh riot, and it’s inspiring, but it is also a major challenge. The construction relies on patience, sweat, love, rigour, tears, and years of commitment from many people who are willing to take massive risks, and it has to be reinvented daily. Every single collaborator entangled on this adventure has devoted themselves completely to this challenge.

What did you learn about yourself in creating this production?

The learning has been immense in this process. Collaborating with this group of artists has taught us so much, not just about the process of creating work in a horizontal structure, but also about a swath of different perspectives. We have been given the gift of hearing stories and experiences, thoughts and feelings, politics and personal secrets, from a group of women we admire and respect deeply. Learning our own blind spots and limitations has been life changing.

What do you hope audiences take away from this work?

We hope that audiences leave this show and think about the truths they are not seeing or hearing. There are two sides to this coin: having the courage to speak your own truth, and having the awareness to practice deep listening to the truths that you may not share. The fact that these six performers on stage are able to share space and time to generously boost each other up to tell their individual stories and bring light to shadowy corners is [we hope] a model of how intersectionality can manifest. In order to move the women’s movement forward, we have to do it together.

Now You See Her is playing at Buddies In Bad Times Theatre (12 Alexander St) now until November 4. Get tickets here.