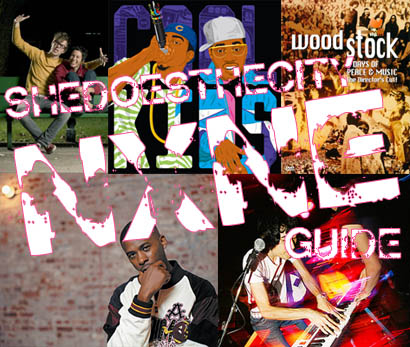 Summer is supposed to be a relaxing time. The only decisions I want to make are whether to order an ice-cold PBR tall can or mix up a pitcher of Sangria. As soon as your feet hit your flip-flops, summer is stress-free. Except for five fateful days. Yes, friends, North By Northeast is at once the best and most angst-ridden weekend of the season (thankfully, 4 am last call makes the overscheduled sword a little less sharp.) Will you reminisce about Woodstock or Sailor Jerry? Hear the wise words of GZA or catch a glimpse of Dakar’s underground hip hop scene? Most importantly, how many amazing independent bands is it truly possible to see in one long, hot, sweaty night? With hundreds of acts playing well into the small hours of the morning, how’s a girl ever to decide what she should check out? Never fear! Team SDTC loves you-and we’ve comprised a list of NXNE’s best bets for each day (and night) of the fest; from films to shows to celebrity interviews. So save your hair-pulling for more pressing matters and your energy for the really important stuff-making sure that, whether you’re dancing to Matt and Kim or The Cool Kids, your head doesn’t hit the pillow until sometime around dawn.

Woodstock: 3 Days of Peace and Music, The Director’s Cut
Hyatt Regency E, in The Ballroom. 370 King St. W. 12 pm.
This 1970 Oscar-winning documentary, from what it probably the most well-known moment in popular musical culture, features performances from The Who, The Grateful Dead, Joan Baez, and more. The Director’s Cut contains 2 hours of never-before-seen footage.
Kill Krinkle Club

African Underground: Democracy in Dakar
NFB Theatre, 150 John St. 5 pm.
This powerful documentary chronicles the political influence of emcees in Senegal, who spread the message of a hopeful future to a large and powerful youth population.

Ashes of American Flags
Hyatt Regency E, in the Ballroom. 370 King St. W. 7 pm.
This doc follows Wilco their 2008 US tour. Tweedy and company perform in some of the most legendary venues in the states, and offer insight into the dynamics of one of the most interesting bands in rock and roll, as well as a unique on-the-road glimpse at the past two decades of American culture.

Language-Arts
El Mocambo (Downstairs), 462 Spadina Ave. 8pm
As is pretty common in this post-modern world in which we live (*bang swipe), L-A defies categorization, plunging ahead instead into the unknown realms of hip-hop/chamber pop. See them because they’re lovely. We should know.

These “North Carolina-based, Brooklyn-born, Atlanta/Long Island-incubated” players know how to craft a song, goddammit! Great if you love Shins-esque(http://www.theshins.com/) vocals, this band has produced some of the best roadtrip tunes I’ve heard in awhile. Plus they’re blowing up the blogosphere south of the border.

Ume
Neutral Lounge, 349 College St. 10 pm
When Ume front woman Laura Larson isn’t putting together some bitchin’ riffs and soul-scraping vocal lines, she’s working on her PhD in philosophy. What a WHOAh-man. Think along the lines of a raging Courtney Love without the psychosis.

Black Hat Brigade
The Drake Underground, 1150 Queen St. W. 11pm
One of our favourite bands to drink beers with Black Hat Brigade is arguably the saving grace of Brampton, On. They’ve described their sound as “drunken art-rock sea shanties juxtaposed against moments of quiet contemplation,” but whatever it is, their tunage surges with thrilling leads and percussive vocals, that make you want to howl.

Zoo-Bombs
Thursday at Silver Dollar, 486 Spadina Ave. 1 am.
Japanese noise rock explosion from the world’s most dangerous band.Head-bang-worthy rock with a healthy dose of psychedelic guitronica that would make Hendrix proud. Not music that you’d play for your grandma, unless she’s the kind of gal who likes to let loose, get wild, and drop some serious bombs.

Arts & Crafts 2009 NXNE Showcase
The Courthouse, 57 Adelaide St. E. 8 pm.
Everyone’s favourite indie label presents some of their best and brightest. The night features newbies Timber Timbre, as well as Most Serene Republic and a special guest headliner. WHO WILL IT BE?

Hori Smoku Sailor Jerry
NFB Theatre, 150 John St. 4:15 pm.
SDTC checked out this doc, telling the tale of legendary Hawaiian tattoo master Sailor Jerry, last week, and left with a burning desire to cover ourselves head to toe in old-school Navy tattoos. (The term ‘pier whore’ was thrown around.) Check this out for a nostalgic glimpse at the seedy underbelly of WWII America, and get screwed, stewed and tattooed.

Matt & Kim
Wrongbar, 1279 Queen St. W. 1 am.
Seriously adorable Brooklyn indiepop couple that could plaster a grin on the most cynical of faces in the most organic of ways.

Rynecologist
Wrongbar, 1279 Queen St. W. 2 am.
Reports from the recent mixtape release came back with one word: mayhem. This is where the NXNE dance party will kick into serious overdrive.

Fox Jaws
Hyatt Regency Day Stage, 370 King St. W. 2 pm
The name is not an ironically winking eye; this band has indeed got foxy chops. Hailing from Barrie, the crew churns out a great vibe you can mosh to, vaguely reminiscent of early No Doubt hopped up on pixie stix and speed.

Lovely Killbots
Rancho Relaxo, 300 College St. 10 pm.
A dangerous piano/drum duo whose seemingly straight-forward percussive stylings are similar to a delicious and convenient jar of Goober (which, for those of you who don’t know, contains stripes of both peanut butter AND jam). Lauralee’s vocals drape over listeners’ ears like a sandpaper-and-cashmere scarf. Ryan’s drumming will surprise you when you discover it isn’t actually your own heart hammering around in its cage like a psychotic peregrine falcon.

American Flamewhip
Kathedral, 651 Queen St. W. 12 am.
It’s been said that you should file these guys under “dirty ass rock and roll.” This is quite an apt category for this ferociously sassy duo from Winnipeg. Lusciously sinful, trash talkin’ vocals and guitar lines that harmonize perfectly with raw, rug-burning sex are what J-Rod and Mama are about. The question is, are you?

Jane’s Party
Now Lounge, 189 Church St. 12 am.
If The Kooks, Bedouin Soundclash, and The Beatles had a delicious lovechild, it would undoubtedly be named “Jane’s Party.” This quad of mod makes you want to fall in love all over again with clean-cut boys, shaggy ‘dos, and strawberry milkshake guitar lines. I’m glad Jane’s having a party, maybe we’ll make it to second base…

GZA
Yonge-Dundas Square, 8 pm.
For the last night of the fest, what’s better then bringing the people together? You and your non-bewristbanded friends can enjoy an amazing hip hop show for free in the centre of the city.

The Cool Kids
Yonge-Dundas Square, 9 pm.
The Midwest’s favourite alternative rap duo are blowing up Yonge and Dundas Square. Show up with a little bit of gold and a pager.