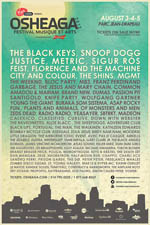 She Does The City's Osheaga 2012 Music Picks

This year’s Osheaga Music Festival has a stacked line up of amazing acts, and some of the set conflicts will induce serious indecision. As a festival veteran, let me impart a few tips:

– Seeing a whole set is always better than seeing half of two
– Sometimes, it makes sense to choose a set based on crowd size
– No matter what you see, it’s pretty much guaranteed to be excellent, so stop worrying already!

Below are our picks for Osheaga 2012.

2 pm, Scene des Arbres: Yukon Blonde
From Kelowna, BC, Yukon Blonde’s feel-good indie pop is always a guaranteed good time. This would be a good time for some afternoon beers.

5:50 pm, Scene de la Riviere: Franz Ferdinand
Throwback! The best thing about this year’s Osheaga line up is the fact that its embedded in the sweatiest dance floors of recent yore. Start the trip down memory lane with the always-awesome Franz Ferdinand. Is there anything cooler than covering LCD Soundsystem, Debbie Harry and Peaches on the same record? No there ain’t.

6:40 pm, Scene de la Montagne: The Weeknd
Sexy time, now. Sway to the sultry sounds of The Weeknd: if you’re not slow-grinding through this set, we recommend making out on a blanket.

7:30 pm, Scene des Arbres: Wintersleep
Okay, yes, we know. They’re playing against Florence and the Machine. While both sets will send a shiver down your spine, Wintersleep is going to be way less crowded, and it’s on a better stage.

8:30 pm, Scene de les Montagnes: Sigur Ros OR 8:45 pm, Scene Vert: MGMT
This is a tricky one. We say, plan your evening based on your mood. Feeling introspective and dreamy? Stare at the sunset and sway to Sigur Ros. Feel like starting the Justice dance party early? Head to MGMT and watch them roll their eyes while the crowd surges with energy during Time to Pretend. Being in a rock band is hard.

9:35 pm, Scene de la Riviere: Justice
O-M-G-D-A-N-C-E. Joosteece! As far as we’re concerned, this is going to be the performance of the festival. And SNOOP DOGG is playing. Leave early, get as close as possible, and be prepared for a thundering crush of sound and sweat. Can sweat crush you? This is the place to find out.

1 pm, Scene de la Riviere: The Dø
This French/Finnish band (whose name I still don’t know how to pronounce. I kind of miss the radio.) have an eclectic and intriguing sound. Bohemian Dances makes us want to do a Lykke Li softshoe through a train station.

1:30 pm, Scene de la Montagne: Kathleen Edwards
Dreamy Canadiana indie (that’s a thing now. I just made it up.) from an Ottawa native with a beautiful voice.

3 pm, Scene de la Montagne: Calexico
These indie veterans are releasing a new album, Algiers, in the fall. Expect lots of new material to get excited about.

8:15 pm, Scene de la Montagne: Feist
Feist’s records are just the tip of the iceberg of her immense talent. Live, she puts on an amazing show, with help from a great band and a trio of singers called Mountain Man. During songs, she’s known to call to them “Whatchoo think about that, ladies?” in between choruses. The best.

9:15 pm, Scene de la Riviere: Snoop Dogg
I would pay so much money to watch Feist and Snoop perform on stage together. Let’s all collectively will that into the universe. At Bonnaroo a few years ago, I tried to go see someone else play instead of Snoop Dogg. One song into his set, the reverberating bass called to me from across the festival and demanded I start making better life choices. I suggest you do the same, and plant yourself right in the middle of the action for his entire show.

2 pm, Scene de la Montagne: Dan Mangan
Polaris-shortlisted Vancouverite (who went to the same high school as Cobie Smulders, aka Robyn on How I Met Your Mother) combines orchestral instrumentals to create his own brand of folky singer-songwriting.

Santi White’s live show, which usually features two amazing, sexy and eerily robotic dancers, is not to be missed.

Michael Angelakos has been bravely open about his struggle with bipolar disorder in the media lead up to the release of Passion Pit’s newest album, Gossamer, which features his brand of dark lyrics set against an ethereal backdrop of sound in an unbelievable falsetto.

The Polaris long-lister is going up against The Shins, time-slot wise. Take advantage of this opportunity to get close to the complex sound of this Canadian artist.

The British band with the handsomest lead singer in indie rock are back with a new album this year. Their show is sure to include some old favourites along with the new material, all powered by Kele Okereke’s magnetic stage presence.

The weirdest French band to ever be in a Victoria’s Secret commercial, M83 put significant rock power behind their tunes for their live show, making it more festival friendly.