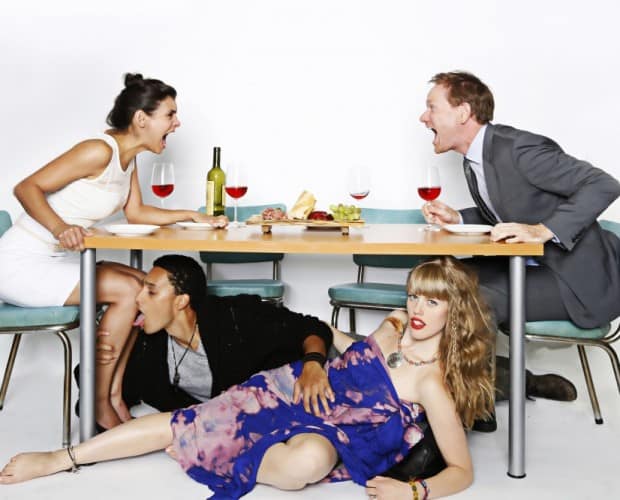 SummerWorks reviews: Delicacy, How to Disappear Completely, and more

SummerWorks 2013 is now underway! We’ve got a few reviews for you here, and you can learn more about the multidisciplinary festival in our SummerWorks guide!

What do you get when an older, conservative couple invites a younger, wilder couple over to their apartment for a night of partner swapping? Who’s Afraid of Virginia Woolf 2.0! Kat Sandler’s Delicacy is a modern look at the politics of love, sex, and trust in two very different couples. Sandler’s dialogue is relevant and refreshing and had the audience in fits of laughter that were equally balanced with moments of harsh, difficult silence. The show’s concept explores well worn territory and at times forsakes character development in favour of clever lines. Of course, the lines are quite clever. Check it out if you’re feeling 100 percent confident in your own romantic relationships—otherwise, get ready for some major introspection!

How often do you talk to strangers? How often do you share intimate moments with them? Hello For Dummies is an interactive art project that pairs two strangers together and, with the aid of an iPod and two pairs of headphones, directs them through a conversation. While repeating lines and following instructions, participants sit on a park bench and hold a conversation, never looking at each other.

The piece’s narrative allows users to both act as characters (by repeating lines) and as “themselves” (answering questions honestly). It flows through realistic and abstract explorations of self-hood and presentation, and questions assumptions of identity and interaction. Because of this, it is well worth any awkward or uncomfortable feelings it may induce. Hello For Dummies also creates some very beautiful moments. I think I kind of fell in love with my fellow dummy, for a moment, at the end. Mark, did you feel the same way?

How Can I Forget?

Sook Yin Lee, Benjamin Kamino, and Adam Litovitz have collaborated to create this multidisciplinary piece on memory and forgetting. The first half is decidedly abstruse, mixing movement, video, and narration to conjure dream-like images of the past. Its abstraction is isolating at times and but the show’s energy builds to keep its audience interested and anticipatory. The latter half of the show is incredibly different than the first, featuring an intensely personal and self reflective interview between Yin and Kamino and a simple yet endearing finale. We won’t spoil the ending, but it had most of the audience grinning from ear to ear.

How to Disappear Completely

At first glance, How to Disappear Completely seems like a straightforward show: a personal exploration about getting over and coming to terms with the death of one’s mother. However, its creator Itai Erdal’s professional knowledge of stage lighting and videography help create a lovely, unique piece. Erdal weaves in and out of narratives while both interacting with the audience and performing for them. His storytelling is casual yet full of meaning and highlights many philosophical and emotional subtleties in an exploration of family, sickness, and death. How to Disappear Completely is a must see.

Midway Along the Journey of Our Life

This interactive show is designed for individual consumption. Participants are blindfolded and led into a small room while they listen to a narrative fed through ear buds. Relying heavily on theatrical whimsy and agreeable audience members, Midway Along the Journey of Our Life requires a lot of trust and confidence from both its artists and participants. If you feel comfortable joining in the action, you’re in for a treat: Walking along Queen West, behind a white rabbit on stilts, while wearing a pilot’s uniform and carrying a locked briefcase, was pretty magical.

Tender Napalm is raw, violent, and compelling. Two people fight for control of a malleable, seemingly imaginary island. Kyle Purcell and Amelia Sargisson are dazzling to watch as they shift rapidly between explorations of their character’s individual pasts to their bizarre and destructive present. At first it is difficult to piece Tender Napalm’s narrative together, but once the tragic reality of the play is revealed, some of its exposition becomes a bit superfluous. This belittles the audience and creates a somewhat stagnant ending to an otherwise enthralling and powerful work.

Have you seen any shows yet? Tell us what you thought in the comment section below! SummerWorks continues until August 18 with theatre, talks, and music acts happening daily!

Tags: Delicacy, Factory Theatre, Hello For Dummies, How Can I Forget?, How to Disappear Completely, Lower Ossington Theatre, Midway Along the Journey of Our Life, Summerworks, Tender Napalm, Theatre, Theatre Passe Muraille