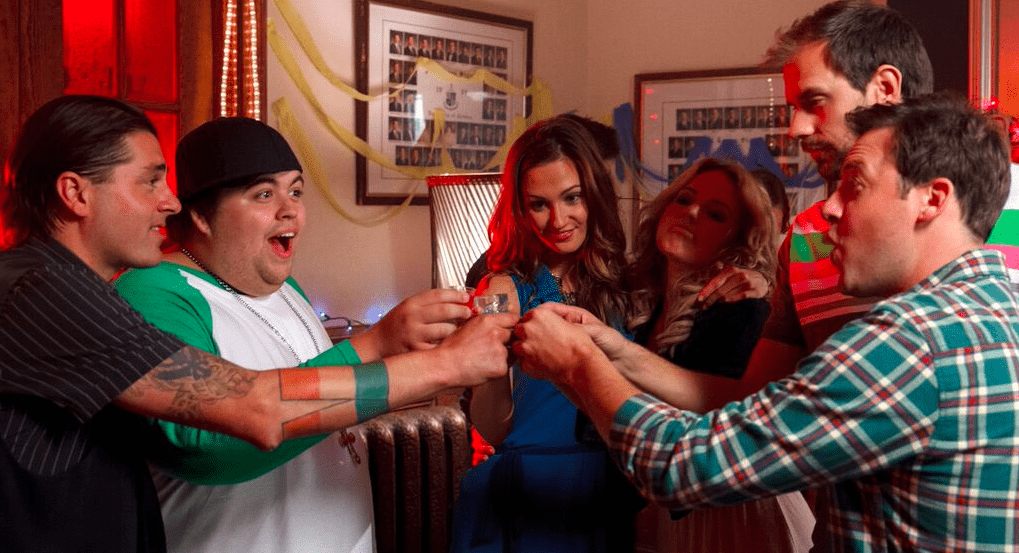 My Ex-Ex opens July 10th, so we share our craziest & gross ex-ex stories

What if you were about to get engaged to the love of your life, but then, in a weird twist of fate, you found yourself hooking back up with that dude you shagged in first year uni? You know, back when you were smoking from a dong bong and playing bongos at 3am Scary thought? Not as scary as it is for us. *SHUDDER*

In anticipation of the release of the hilarious and raunchy flick My Ex-Ex, Shedoesthecity writers compiled a list of their most ridiculous, creepy, and gross stories from our past relationships. Recalling these memories led to many questions: Why? How? What were we thinking? Wait, WHAT? If you think your stories are weird or horrendous, you’re not alone. Here are the ten worst ex-ex stories anonymously shared by Shedoesthecity writers:

The first time we started to hook up, he whispered in my ear, asking if I was a bad girl. I said, “Yes, sometimes I randomly use capital letters in a sentence because I like how it looks.” He left.

The first time I went back to his house, we did it on the basement floor, where his sheetless mattress lay between a plate of old chicken wings and an ashtray overflowing with cigarette butts. The disgusting scene should have been a sign.

He asked for the cashier’s phone number when we were at checkout in the grocery store. He then asked me to hold the piece of paper, with her number on it, because he didn’t have any pockets (because he was wearing PAJAMA PANTS). When we got outside of the store I put the piece of paper in my mouth, chewed it up, spit it into his face, and waited in his car for him while he picked it up and dried it off. It remained in the car cup-holder for the drive back to wherever the eff we were going.

The summer of 2000, I spent every day in a Front Street telephone booth, calling to wake him up and bring him to orgasm through dirty talk. I was working at a bank, he spent the summer drinking beer and jerking off. It didn’t last. (Don’t ask what I got out of the situation, still not sure.)

I knew something was off when I found myself chugging my drink and continually excusing myself to go to the washroom. I knew it was time to end it when those washroom visits became thirty-second windows to swipe through Tinder.

THE BIGGEST JERK OF ALL

One time I had to make an unfortunate middle-of-the-night trip to the ER because of a UTI that got way out of hand. I had to cancel plans with him the next day because I was up all night and tired. Before I could tell him why I went to the hospital, he blurted out, “Did you let another guy splooge in you? Needed to go get Plan B?” End of phone call (and relationship).

He bought me a puppet as a gift once, a princess, which I thought was an adorable, hilarious present. But then for no reason he bought me a second puppet, a king, which really wasn’t necessary. The creepiest part is he would demand that we play with them regularly. We went to my friend Mike’s cottage and he insisted that we bring the puppets with us. Sometimes when we were at his house without them he would talk about how he missed them. One day he said he was considering buying a third one and I yelled out, “NO MORE PUPPETS!” When we broke-up, in a fit of rage I threw the puppets in the garbage. That night I watched Toy Story 3 and proceeded to have nightmares for days.

A week into our relationship, he told me that he had found the perfect name for one of the characters in a story he was working on. Then he asked me to read over what he had written so far and I discovered that the name he was talking about was mine. To no surprise, he turned out to be extremely clingy and obsessive.

Thirsty for a glass of water after hooking up with the president of a college fraternity, I slipped on his t-shirt that had been cast aside in the heat of the moment. Mr. President leaped from the bed and ripped the garment off my back in one swift movement that I thought signalled the start of lovemaking, round two. Instead, he told me I couldn’t wear that particular shirt, with Greek letters, because I was not part of the brotherhood. F U might have been more fitting.

A blind date informed me, before our drinks had even been delivered to the table, that he was just getting over his pornography addiction, adding, “And that is where you come in, my darling.” I stayed up until he started bragging about the camera equipment already set up ever so conveniently in his bedroom.

Again, WHY? HOW? WHAT WERE WE THINKING? But it does make for some good stories, I guess.

My Ex-Ex will be screening in Landmark Theatres across the country on July 8th as part of the Canadian Indie Series. Opens in theatres July 10th.