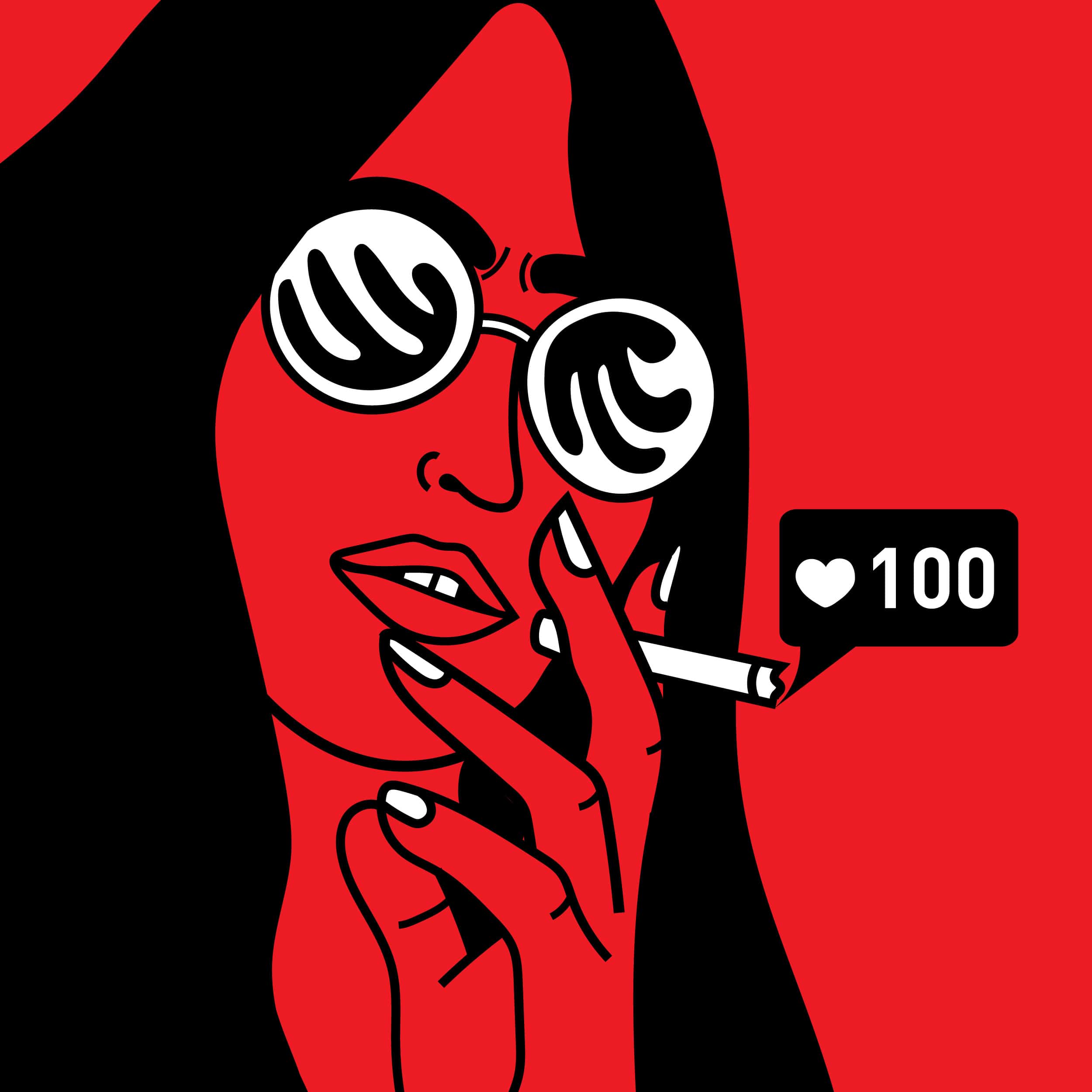 That Moment We All Became a Brand

Sitting next to a table of polite vegans and BJ bros in an overcrowded fire escape disguised as a patio, I meet with @peachfuzz for our weekly meeting to chat about branding, professional crises and romantic self-improvement. One drink in, my phone buzzes and I see a message from @gentlepapi inviting me to his pop-up inside of a pop-up at a magazine launch party happening tonight. “There’s free pizza, starts at 9pm,” he adds. I reply and tell him I’ll be there and can’t wait to buy whatever he’s selling now. Shortly after, I text blast “sup?” to six people, recruiting friends to join @peachfuzz and I for another drink at a really hip restaurant that doesn’t take reservations.

Waiting for a table at the bar, I’m distracted by an amateur foodie taking a photo of his Horse Tartar with his flash still on. On the other side of the room, I see @ghostfacetodd, an influencer surrounded by a white-pant entourage who sell ironic dad hats at @burbanoutfitters.

One Whiskey Sour into my tab, @justbitching and @seeyounever walk into the restaurant, slightly tipsy from a media event with free champagne and red velvet cupcakes. We take turns examining their gift bags like evidence in a crime scene investigation: three emoji stickers, one pack of low-fat vanilla icing and two free spin passes to a hipster gym on Ossington. There’s a personalised note from Liz, a PR President on behalf of @sweetfix – a cool new brand targeted to smart independent feminists – thanking @justbitching for attending the event.

Like kids around a campfire, we watch on as @justbitching shows us three different pictures of herself standing in front of a mirror making the same facial expression with her head slightly tilted in three different angles. Her photos are edited with a flattering pink filter and she’s having a pre-midnight caption crisis. Thankfully, @seeyounever suggests a Blondie lyric from the 1978 hit song, “Heart of Glass” and we’re all very amused by this. The bathroom selfie is posted and @justbitching relaxes for a moment, feeling pleased with her final combination of ironic hashtags and a caption that’s open to interpretation. We share a plate of charcuterie and complain about the muggy weather because it’s out of our control and dampening the vibe.

The sky is orange like creamy gelato and I’m semi-crushed by the three drinks I’ve slammed in the last hour. A woman in a sleeveless turtleneck joins our table and confesses that she’s a “visual storyteller.” She says it like it’s a foreign job title from Milan that hasn’t hit North America yet. When she’s not visually storytelling, she’s also a full-time entrepreneur slash makeup artist slash comedian slash wedding photographer and she’s really jetlagged from a work trip to Miami. She tells me to follow her Instagram account @hushpupper and we laugh, but she’s very serious. I double tap her most recent picture, a sponsored post for state-of-the-art dog shit bags. She tells me she was paid $300 to pick up dog shit, which makes me feel uncomfortable, but I smile and kind of chuckle to be sympathetic.

We leave the restaurant after splitting the bill seventeen ways, then walk to the issue 01 launch party of @luckyapplemag, a new publication about the conceptualization of gender and the invisible patriarchy of our genderation. The pop-up is located inside an abandoned storefront that used to be a cold pressed juice bar slash yoga studio slash salon.

The space is empty, slightly modern and extremely minimalist because the party was planned two hours ago and there’s no furniture to sit on or lean against. The women scatter to have light-hearted conversations with friends-of-friends and I give my business card to @runningsimon, a stylish athlete who pays a photographer a lot of money to take high-res photos of him running around Queen West. I ask him questions about the photographer: Hold up. Is the photographer an athlete? Is the photographer running beside you while simultaneously taking photos or is he in a moving vehicle? Are you posing and fake running? I catch my breath and stop jabbering for a moment.

Overwhelmed by my dumb questions, @runningsimon ignores everything I asked him and tells me he’s sponsored by @bluebalance and flying to New York tomorrow. Our conversation is interrupted by @marathonmartha, who’s keen to tell us about her aching muscles and how hard she’s been working towards her next biggest accomplishment, the longest marathon “like ever.” I count how many times she says the word “marathon” and feel shocked that my count is only at six, maybe seven, then a final count of eight as she climaxes with a boring story about almost twisting her ankle on a dance floor and how devastating it felt to almost lose it all. I look at my phone and excuse myself to grab a hot slice of Hawaiian pizza before a gang of foodie thugs with ten-pound cameras and selfie sticks roll up.

Eating pizza and people watching, I see a grown man wearing a fedora hitting on @peachfuzz as @justbitching poses in a slav squat position by a photo wall with confetti and a brand name that’s selling mood rings to modern educated women.

In the basement, I’m relieved to find @gentlepapi selling environmentally friendly wristbands that glow in the dark for two days straight. I buy one and give him a hug before escaping to the solitude of the bathroom.

In the silence of the lavatory, hotboxed with pizza farts and Le Labo 4, I reflect on the last three hours and wonder about @runningsimon’s photographer and if I should start calling myself a “visual storyteller” and why I didn’t start selling dad hats when everybody else did because I could have been a millionaire by now. I’m angry with myself, but feeling inspired to make a profit while following my dreams in a city with young urban creative people who deserve success because they were born to be different.

The night is immortalized by a gift bag with a sticker of a peace sign, a naked lady keychain and an environmentally friendly glow-in-the-dark wristband that is guaranteed to keep glowing for the next forty-eight hours.