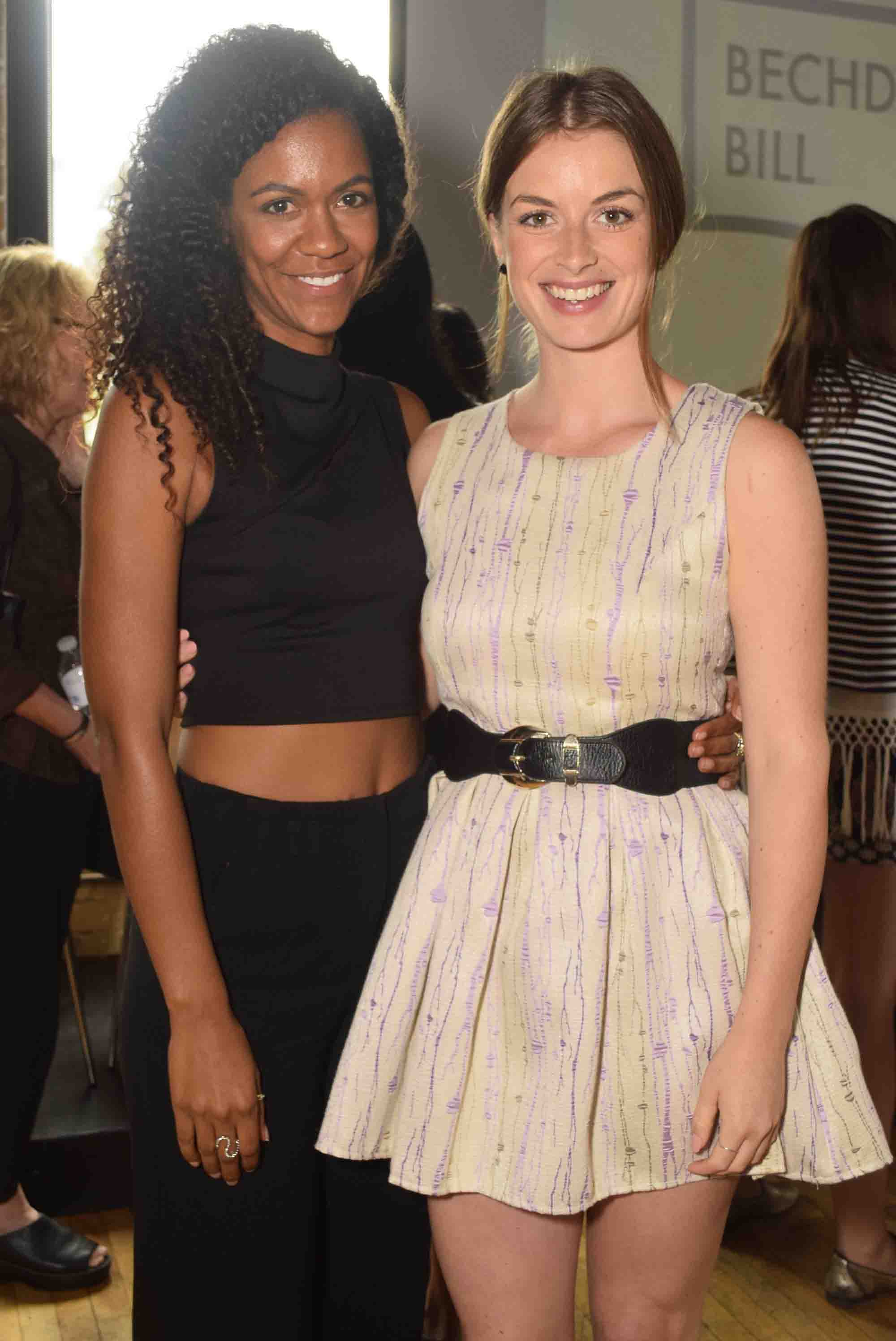 The Bechdel Bill launch at TIFF at the Spoke Club

This past Friday I was lucky enough to attend the launch of the Bechdel Bill, a women in film initiative that asks producers and production companies to pledge that 80% or more of their films pass the popular feminist Bechdel Test. In order to pass, a movie must feature at least two women who have names and talk to each other about something other than a man. Doesn’t sound that hard, does it? You’d be amazed to find out how many films fail miserably (hint: A LOT OF THEM DO). The test was named after the brilliant American cartoonist Alison Bechdel, since the idea first appeared in her comic strip Dykes to Watch Out For in 1985.

Before I was exposed to the concept of the Bechdel Test in the early 2000s, I had no idea that cinema had such poor representation of women in front of the camera and behind the camera. I mean, sure, I noticed that more men were in the leading roles than women were and that the stories generally focused on the male experience, but my eyes hadn’t been truly opened to this serious issue before films were being analyzed from this perspective. 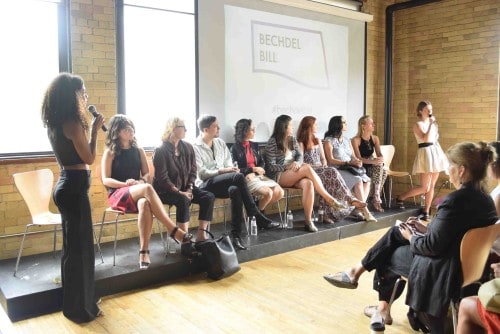 And now that I see this glaring sexist problem, I can’t unsee it. Every time I go to the movies I ask, “Does this film pass The Bechdel Test? Do the two women wearing bikinis in this action movie have names? Have they spoken to each other AT ALL? Does giggling count as speaking? Is their conversation about something other than the muscle dude with the gun?” And when the film doesn’t pass, I then ask, “Why didn’t it? Could it have? Should it have? How easy would it have been to change a male character into a female one? Or to give the existing female characters a couple lines and a couple names that aren’t Hot Babe #1 and Hot Babe #2? Would the story be completely different or could parts of it remain? I NEED ANSWERS PEOPLE!”

These questions were asked in even more detail on September 18th at the Spoke Club where dozens of women working in the film industry in various capacities gathered to dissect cinema through a feminist lens. There were actors. There were writers. There were directors. There were editors and composers and producers and distributors and comedians (me!). We all ate mini grilled cheeses and delicious tiny quiches and baby poutines as we chatted about how ridiculous it is that the female story is so rarely told in film. 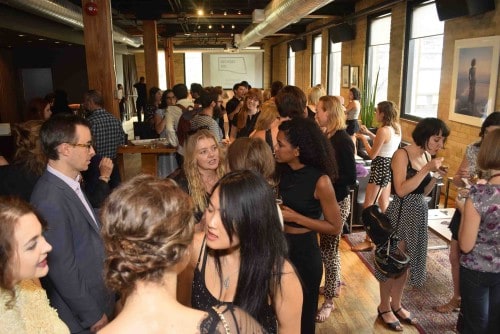 My guest, fellow amazing comedian Kat Letwin, and I introduced ourselves to several powerful, fascinating, extremely talented ladies before the panel kicked off. It was refreshing to be in the presence of such an eclectic group of women from a multitude of disciplines. We weren’t just hearing from the individuals writing the scripts; we were hearing from everyone involved in the process of creating cinematic masterpieces. We all possessed a range of experiences and skill sets and outlooks, which is key when having conversations like this. 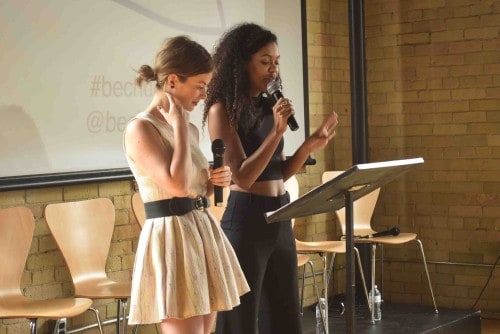 Everyone was introduced, there was a quick explanation about what The Bechdel Test is, and then they discussed potential solutions for this ongoing obstacle. Such solutions included increasing the percentage of women in writer’s rooms, acquisitioning more scripts where female characters are at the centre, advocating for diverse stories being told, hiring junior female writers, directors, and producers to give them the experience they need to become senior, and fighting for gender equality in film no matter what position you hold.

Each woman on the panel shared her own experiences and frustrations from working in such a male-centered industry. They talked about sexism they’ve felt in their respective careers and how they deal with it or battle against it or try to make change for the future. It’s comforting in a way to know that you’re not the only one struggling. But it’s also crappy and painful and sad to hear that there are hundreds of stories like yours. 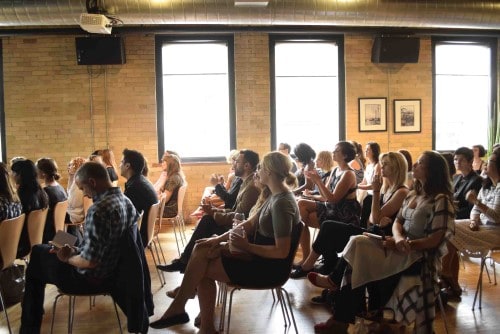 What I found truly incredible about this event, and what I love most about other panel discussions about sexism, is that none of the women were scared to speak up. They didn’t feel shame for sharing their opinions or judged for not being cool and understanding and “one of the boys.”

The sisterly love continued upstairs to the rooftop at the Spoke club where we sipped on glasses of wine and whiskey and beer and ate cake pops and cupcakes and rice crispy squares. We chatted about life and film and alcohol/sugar and raved about what a wonderful event this was. Women were hugging each other and shaking hands and building bridges together. There was no negativity in that space. Only positive vibes and total encouragement and hope for the future. When I decided to depart, I said goodbye to the new friends I had met, shoved another cupcake into my mouth and left the Spoke Club feeling strong and fired up and wanting to make a movie where two women with names talk to each other about something that isn’t a man. But really, every filmmaker should want that. Am I right? 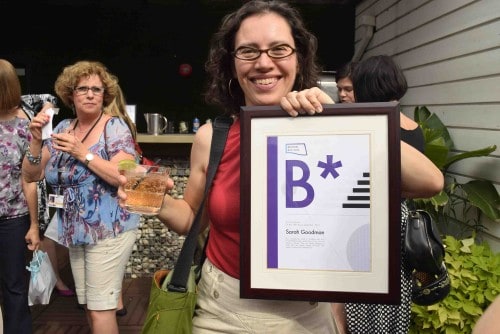