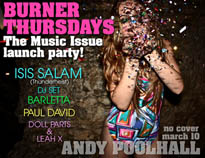 Pssst. Are you are looking to step outside your life and into a space where music makes you see colour? Let’s get high together on sound, taste each other’s sweat and smile allll the way up. That’s right, lose yourself and bend way back because the unofficial Burner CMW AfterParty / Burner 03: The Music Issue Launch Party is tonight. Tonight!

Co-founders Leah Stephenson and Sarah Miniaci launched Burner Magazine issue No 3: The Music Issue last week and already 847 people have Facebook liked it, “LIKE!” The “digital pop art magazine” is like injecting an IV into my computer and watching it wake up, breathe and cry. The web is full of shit that is churned out robotically, without thought or time. Burner is different. Obviously born through passion, when you flip the pages you see hours of work, decisions over slowly brewed coffee and love poured into something online. It’s a rare breed.

Poetry flows into thoughtful interviews which stream into vibrant, I think, water colour paint collage? I’m not exactly sure how to describe the artwork but Co-founders Leah Stephenson and Sarah Minaci have done something original and it’s obvious that they have the respect from the arts and literary community. From Yoko Ono to our very own Haley Cullingham (Heh, bet you didn’t see that one coming Haley?) Burner is a journey through the hearts and minds of people who deeply care for creativity and value a space that maintains integrity in a world wide web that thrives on anything but. (Like, fucking stop with Charlie Sheen.)

Okay, enough with the heavy petting, here is a super fun music quiz I sent the Leah and Sarah late last night while licking yogurt off a spoon in bed. It should reveal who these Burner babes are, potentially sell you on attending the party tonight and leave you on, umm, a high note:

What song makes you instantly happy?

Sarah: Supersonic by Oasis. There’s nothing intelligent or thoughtful about it; it’s all open highway and sunny skies and shouting your lungs out. And, even after all these years, every time feels like the first time all over again.

It’s a shitty shitty day in 1999. You are lonely and just had a fight with a loved one. What CD do you blast?

Leah: Any year from the age of 15 and up, I wouldn’t blast a CD.  I’d get in front of my resonant friend, the Heintzman upright piano, and play Beethoven’s Moonlight Sonata.

Sarah: Live Through This, Hole. From then to present day, always and forever. That album kicks me straight in my guts and flat on my ass.

(Don’t you love the contrast of those answers? In the wise words of Paula Abdul, “opposites attract.”)

Oh look! Someone made a film about YOU! Please make the soundtrack to the opening credits this:

Leah: Thomas Bangalter’s So Much Love To Give, cuz I love life and I got so much love to giiive!!!

Sarah: Mesmerizing, Liz Phair. Should my life ever warrant its own biopic, I can only wish it would be so.

“Put this on, and I’ll slow dance with you forever.” WHAT SONG???

Leah: The Long and Winding Road by The Beatles.  This song is so longing I can’t let go…

First concert you ever went to that formed a positive memory:

Leah: Lollapalooza.  It was the height of grunge and Pearl Jam, Red Hot Chilli Peppers and Ministry all played.  So did Soundgarden but they were never a good live band.  Pearl Jam blew my mind.  Eddie Vedder was completely possessed.  The whole concert was astounding.  That may tie with Metallica live.

Sarah: Stereophonics, You Gotta Go There To Come Back Tour. I won the tickets when I was shit broke, and it was back when you could still smoke inside Toronto venues. I wasn’t even old enough to buy cigarettes yet, but convinced some random dude to do the deed for me and proceeded to chain-puff my way through my favorite tunes, Vegas Two Times and I’m Alright. I’d been to my fair share of concerts before, and quite wonderful ones at that, but this was total, ultimate, perfect bliss and I’ll never forget it.

Canadian band you can’t get enough of riiiight now:

Leah: I still have to say Metric.  I can’t wait for the album they’re currently writing, and for the interview when it drops!

Sarah: I’m really into the Darcys right now, though I unfortunately haven’t been out to see them live yet. It will happen soon, of that I can assure!

KARAOKE!  “Don’t even think about it, that’s MY song!” WHAT SONG?

Leah: Haha, this is my karaoke song to be performed thoroughly wasted with a dear friend and I don’t think anyone would fight with us about it:  Dans le port d’Amsterdam by Jacques Brel.  Seriously.  So.  Much.  Fun.

Sarah: Bohemian Like You, The Dandy Warhols. For real!

Leah: The Blue Room by The Orb.  It’s all about pulsing bass and drums.

Sarah: Oh, god. It’s gotta be Can’t You Hear Me Knocking by the Rolling Stones. Jesus Christ, that Keith Richards can make me dance like no one else.

Leah: YMCA.  I love it when 80 year olds, 18 year olds and 8 year olds dance this amazing gay anthem together.

Sarah: Your Song by Elton John.But I don’t necessarily consider it guilty!

If you could play one instrument exceptionally well, what would it be?

Leah: Keys, including for programming.  Emphasize the could because of lack of time…

Sarah: The cello has always really resonated with me for whatever reason. But if I could understand the intricacies of a guitar as gorgeously as Eric Clapton or Jimi Hendrix, then maybe that too.

You are feeling beyond hungover, what would be the worst song for someone to play on max volume in your ear?

Leah: Don’t Break My Heart My Achy Breaky Heart.  I might have to hurt you, badly.

Sarah: Anything by Ke$ha or anything by all those similarly-minded, MTV-bred robots.

Have you ever invented a dance move? If so, what is it?

Leah: The “Get My Shoe Out of the Mosher’s Fist” Hop and the “Dodge the Water Bottles From Angry Fans” Shuffle.

Sarah: Recently, myself and a friend invented a little move we like to call The Stigmata. You kind of throw both of your arms out at a 90 degree angle, tilt your head back slightly, and bob up and down.

It looks really strange from afar, but honestly feels amazing to throw your whole body into at the proverbial high point of a song – be it the big drop or when the bass kick comes in or whatever. Last week we tested it out and had the whole dance floor doing it by 1 a.m.

Why the music issue?
Find out here.

AND COME TO THE GOD DAMN PARTY! Deets:

The unofficial Burner CMW AfterParty, Thursday March 10
Isis Salam (of Thunderheist) will be on the decks. HAWT. Plus! Local heroes Barletta, Paul David alongside Leah and Sarah.
Andy Poolhall – 489 College