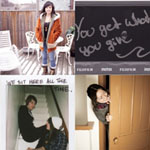 The Image Interviews: Joel Yum and his cameras capture Toronto creators in their natural habitats

It’s a little bit Selby, and a little bit behind-the-scenes: Joel Yum tracks down Toronto’s creative folk and hangs out in their space, capturing their lives and art in a visual interview for his website, The Image Interview. The result is revealing and appealing-a voyeuristic look into the worlds of his subjects, emphasizing the simple things: where they live and work, what they believe, and what inspires them. From photographers to comedians to singers and DJs, this is a great glimpse into Toronto’s thriving art scene. We sat down with Joel at The Grindhouse in Kensington Market to talk about his project.

SDTC: When did you develop the idea for The Image Interview?
Joel: I was still insecure as a photographer. Three to four years ago, it was still a hobby. I wanted to show people, and who they are, but no one was paying me to do that, it’s always weddings, headshots. [In The Image Interview] the shoots revolve around an extension of who they are. I wanted to focus on people who are still focusing on traditional values. They were just being themselves, and I got the chance to photograph people in their element. Location is key. I wanted to show the person behind the work. I try to find the real people who are doing the real thing. Everything in life is simpler than people make it out to be.

What are your hopes for the site?
I would like curators, art buyers, scouts to be able to come to the website. People will know the artists have a good work ethic, a good attitude.

How did you develop the format for the Interviews?
For me, everything is trial and error. I have concepts in my head, but they don’t really play out until I actually try them.
I don’t change things until I know ‘this is a great idea.’ I found the Fuji Instax, and I came up with the idea to have my subjects write their thoughts down. Let’s keep it thoughtful.

Who is a photographer who inspires you?
I love Mary Ellen Matthews, who shoots the SNL photo bumpers. Actors are always performing, but in those photos, there’s no themes or concepts, they’re just having fun in front of the camera.

What’s a moment from a shoot that stands out in your memory?
I was intimidated, at first, to shoot other photographers. When I shot Courtney Lee Yip, she was cat sitting. The cat jumped in the hamper, and she stopped our shoot to take photos. It’s the moments where you really see that they love what they do.

~ Haley Cullingham
Images by Joel Yum, from The Image Interview