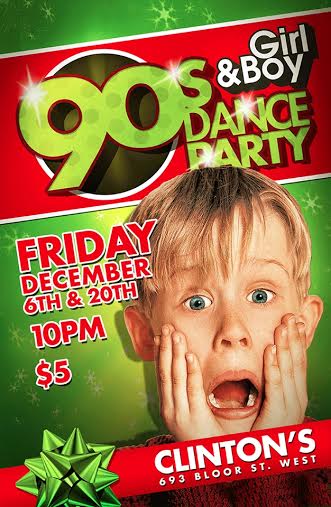 10 pm VICE Presents: Xmess 2013 @ The Shop under Parts & Labour, 1566 Queen St. W. What’s that, Charlie Brown, you want to do that hands up in the hair Peanuts dance around the punch bowl? Cool, cause VICE is bringing in NYC’s #1 party man, Jonathan Toubin, to play just about every rock ‘n’ roll record you’ve ever loved real loud. RSVP here.

10 pm Where the Vile Things Are @ The Ossington, 61 Ossington Ave. Primordial rock ‘n’ roll, early punk, and soul. ALL VINYL.

7 pm Headmistress Holiday Pop-Up @ Hermann & Audrey, 1506 Dundas St. W. Just in time for the holidays, Headmistress is hosting their annual Pop-Up. Santa has truly arrived and he’s brought a bag full of good times, great playlists, and wonderful handmade, Headmistress Accessories at 10% off for one glorious night only. RSVP to rsvp@loveheadmistress.com.

8 pm Seinfeld Super Terrific Happy Hour: A Festivus For the Rest of Us Edition @ Unlovable, 1415-B Dundas St. W. In classic pub-style trivia, Super Terrific Happy Hour trivia features intense trivia questions from the entire history of Seinfeld. No multiple choice, no questions out of canon – just straight-up Q&A on the world’s favourite show about nothing, brought to you by three undefeated Seinfeld trivia nuts who clearly have too much time on their hands. And as a miracle Festivus bonus, they will have their very own version of Feats of Strength and Airing of Grievances! You and your team could win amazing prizes, and most importantly, be next winners of the sacred Sacamano Cup, made from the finest dollar store fusilli!

9 pm D.I.Y. @ The Piston, 937 Bloor St. W. The only way to assure you can get moving on a particular endeavour is to put one foot in front of the other and make it happen for yourself. That is what D.I Y. Is all about; four bands known mainly by friends and family who make incredible music. Performances by Heirloom Beats, Me & The Royal We, Complaints Dept., and Bare Claws. $7 or $5 with a can of food (which will be donated to the Daily Bread Food Bank) or FREE with 3 cans of food.

9 pm Fort York, Wax Atlantic & Odd Years @ The Garrison, 1197 Dundas St. W. Fort York are a group of great friends who love music. Two years ago, they spent some time recording the songs they’d worked on for ages; the end was result was “Feels Like Then”, an 8 track EP released in December of 2011, to instant acclaim. As the EP continues to make the rounds, in January they released a follow-up EP. The Short Season was released in digital format, a popular style of the era. They’ll be joined by Wax Atlantic and Odd Years.

10 pm Moves @ Andy Poolhall, 489 College St. Non-stop dance music all night with DJs Barbi (Phelyns Of Vedici), Brains4brkfst (Evolved), Caff (Ignition), and Gabe=A (Moss Boss). Get on the dance floor and show them your moves! $5 before midnight, $10 after.

10 pm Hip-Hop Karaoke: Round #83 @ Revival, 783 College St. HHK closes up shop on 2013 with a festive gathering of rap karaoke! Sign up for your track and rock and shock the house with your verbal skills. Hosted by Abdominal and More Or Les with DJ Numeric and Ted Dancin’. $10 before 11 pm, $15 after.

8 pm Soulstice: Festival of Lights Afterburn @ Handlebar, 159 Augusta Ave. The sun will never have been farther away from Kensington than on this short, dark day. Upside is: bright white lights, and dancing deep into the long black night can warm up any shivering soul, no matter how cold. Bass-heavy, dancehall, hip-hop, funk, edits, and all kindsa boooom brought to you by the usual suspects: Originao, MFThompson, Starmak, and Dr J.

10 pm Get It Together: Open Your Heart Edition @ The Boat, 158 Augusta Ave. An open-format dance party – last one of the year! All styles, all genres, all peoples welcome. $5.

11 pm Quatro @ The Drake Underground, 1150 Queen St. W. Bridging the gap between four different eras and forming a cohesive sonic bond, Conor Cutz and Rouge bring you a night of the best music from times past. From the 1970s to the early 2000s, expect to hear the best of everything from James Brown to Justice, M.J. to Biggie—tracks that defined generations, seamlessly mashed up and reworked by the infamous duo. Around midnight, renowned speed artist Anthony Haley takes the stage and begins performing his craft. Gaining inspiration from the crowd, music and overall feel of the night, Haley will take you on a visual quest creating piece after piece live on stage. $10.

1:30 pm “It’s A Wonderful Life” Screening & Fundraiser @ Revue Cinema, 400 Roncesvalles Ave. ‘Tis the season to watch George Bailey discover the meaning of his life on the big screen! Affable, earnest George has always put others before himself. His big dreams were put on hold by the war, his father’s death, his brother’s life and well, perhaps, poor luck. As mean old Mr. Potter puts the squeeze on the Bedford Falls’ Building & Loan, George starts to think maybe everyone would be better off without him. This film is a holiday classic for a reason! $5, with proceeds going to St. Francis Table in Parkdale.