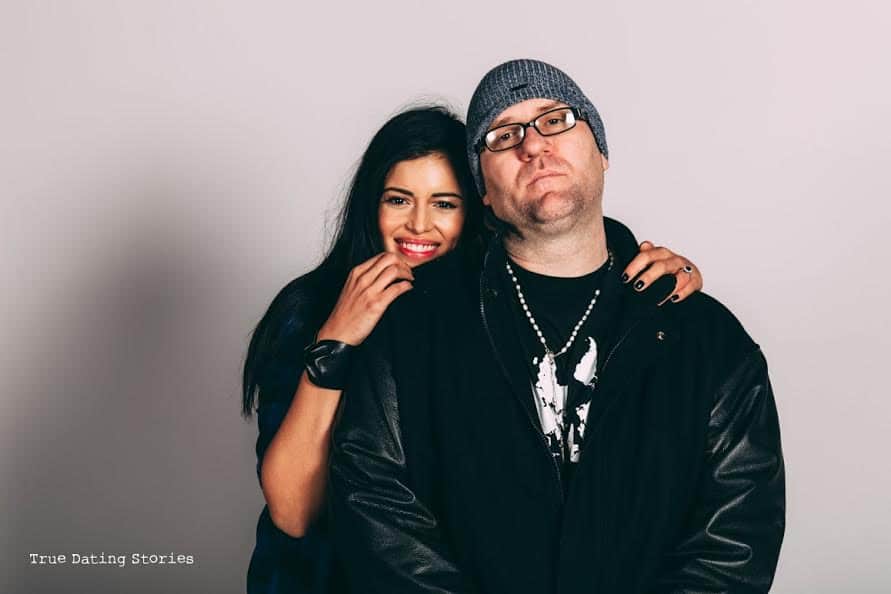 Have you checked out True Dating Stories yet? CBC’s hilarious new web series, created by Andy and Matt King, kicked off last week, and has been racking up the ‘likes’ steadily since its launch. Here’s the deal: real people tell their funniest, wildest and most embarrassing dating stories that are recreated by local actors and comedians.

Since Darrin O’Brien (Snow) and his whip-smart babelicious fiancée, Tara Elizabeth, are one of the couples featured in the show, we got to ask them intimate details about their love life. Snow answered a couple questions, but Tara Elizabeth (who is a writer) dished everything from which board games they like to play in cars (that’s a thing they do) to a legendary disagreement they had while on a vacay in New York City. In True Dating Stories, they reveal how their games-in-cars hobby nearly landed them in jail. (Holy shit! A licky-boom-boom-down!)

How did you meet?

Darrin had a mutual friend come up to me and ask for my number. He was sitting with a few of his friends and pretended not to look at me, you know trying to be all cool. She then told me that he was really funny and a nice guy and that he would like my number and because I knew the girl pretty well…I accepted and gave him my number.

Do you remember when you first heard Informer back in 1993?

I do remember the first time I heard his music. I was sitting in the back seat of my cousin’s friend’s car, looking out the window. I remember my cousin and her friends were freaking out and really excited to hear the song. They kept saying, “He’s from Ajax” and talking about how he went to their friend’s high school. He actually only lived in Ajax for a year but it was enough to excite my cousin’s friends because that’s where they were from and they couldn’t believe someone famous was on the radio from Ajax. I remember looking out the window and quietly thinking how different his voice was and listening to my cousin rave about him. That’s the only memory I had up until I met him at our friend’s function.

Our first date…hmmm…well, he picked me up in his car like a gentleman and asked me what I would like to do and where I would like to go. I thought about it for a minute and then suggested going to the bottom of Jarvis to the big Loblaws grocery store to look at food. He looked at me and said, “That’s where you want to go?” I said, “Yeah, it’s funny to go down the aisles and look at all the different choices of food.” So he said okay and off we went. We walked in and went down aisle after aisle and he was cracking jokes and grabbing frying pans and packages of bacon and pretending to fry up the bacon. We laughed so hard and had such a good time. Darrin told me he had never been on a date to a grocery store before to look at food and then asked me if I wanted to go for a walk down by the water. We sat on a bench and looked up at the stars and talked about life, planets and aliens.

Next, he asked me if I wanted to go try to find his uncle Patty who had just been released from jail for murder. I just stared at him and said, “What? First off, wouldn’t your uncle be sleeping? It’s 1AM! Second, how can we just find him? Wouldn’t we need to call his cell phone? Finally, he just got out of jail!?” Well, off we went to look for his uncle that just got out of jail in Regent Park. At this point I was intrigued, scared and puzzled as to why I was not running home. Ten minutes went by and as luck would have it, there in the dark without a shirt on in mid-October is his uncle Patty. At first, I obviously didn’t believe that it was his uncle but then Darrin yelled out the window “UNCLE PATTY!” and he responded, “PARK THE CAR, NO ONE’S GOING TO TOUCH IT!” Darrin got out and they hugged. My mouth was on the floor…there he was fresh out of jail but 100% gentleman. We all chatted and walked for a bit and then we said goodbye. Darrin drove me home and walked me to the door to say goodnight. That night led to many more weird dates to come. I swear, it just kept getting weirder and weirder…LOL

Do you guys play a lot of board games? In cars?

Yeah, we do play a lot of board games in cars. We like playing Yatzee, Scrabble, Sorry! and card games like Crazy Eights.

A perfect Saturday would be same as any other day! We strive to have as much fun and as many adventures as possible. Fun could be chilling out at home, going to waterfalls in Hamilton, exploring and just being together.

Have you ever had an epic fight while travelling?

Yes! The last night before we left New York I wasn’t feeling that great. My stomach was hurting but I didn’t say anything because I wanted to go to see his friends like we had planned. The night was going great but my stomach was still hurting, I had a headache and I really just wanted to go back to the hotel, pack and go to sleep. I kept asking him and he said sure we can leave in a hour, not knowing that I was in pain and then as it sometimes does, one hour turned into three. At that point, I had to get kind of bitchy and tell him it was time to leave. Before we left, Darrin’s friend told him one thing: under no circumstances should you take Tara through Central Park for a short cut.

Outside I finally told Darrin what was up and that I felt sick. He said, “Okay, we will get back fast.” We looked across to Central Park and we both knew we had no choice but to go through the park. We survived the dark shadows and people lurking. After we made it through we got in a cab and realized we didn’t bring enough cash with us to get across the George Washington Bridge. The cab stopped at the bridge and told us we could walk over it from here, so we got out and walked up toward the gates to the bridge. The gates were locked so we hopped the fence. Shortly after we realized there were too many fences to hop, as numerous sections of the bridge were locked. We got really nervous and headed back to the entrance thinking about how we were getting were going to get across. Before you know it I’m crying and we are literally trapped in the number 1 crime area in America, Washington Heights. Meanwhile, Darrin is pacing back and forth trying to figure out a new plan. His grand idea is to now HITCH HIKE across the GW Bridge.

I had never hitch hiked before but I desperately needed to get back to the hotel, so I agreed. Next thing you know, Darrin sticks his thumb out. Ten minutes must have gone by and not one car stopped. So, of course Darrin’s next genius idea is that I stick my thumb out, while he hides in the dark. After about 30 seconds, a car stops, the doors open and two ‘hood’ looking guys tell me to hop in. Darrin appears from the darkness, jumps in the car first and says, “Hi guys. Can you give us a lift to the other side of the bridge?” The guys were stunned but really had no choice other than to say okay. We hitch hiked across the GW Bridge! They dropped us off at the side of the highway and I made it back to YYZ intact.

Can you share with us details on the most recent date you had?

The most recent date we had was dinner at the CN Tower last February, where Darrin proposed to me on the Glass Floor! Since then, he has been spending a lot of time working in Jamaica but he is currently back in Toronto and this question just made us realize…we definitely need a date night ASAP!

What qualities do you love most in each other?

Qualities Tara loves about Darrin: Witty, down to earth, caring, thoughtful and sweet.

Awwwwww! You guys are cute. What’s your best relationship advice?

Our best relationship advice would be this: Communication is key, lots of it. Don’t fake the spark, be honest. Have lots of adventures and always end the night in Bedrock 😉