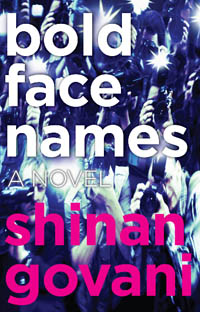 Nova Scotia lesbians, Elite models stuck in the Spoke Club elevator, Kurt Browning, Sotto Sotto, Mary-Kate Olsen, archi-tramps and Manhattan’s finest gynecologists – throw this juicy mélange in a Cuisinart and you’ve got one hilarious game of connect the dots. Boldface Names is a giggle-ridden read that goes well with a box of Pot of Gold and your cozy Isotoner slippers from Nana; perfect holiday fluff.

With absolute certainty we are going to declare this as the only novel that likens Speidi to A.Y Jackson (sort of) and moves from an H&M party in the Hollywood Hills to aisle four at Pusateri’s.

SDTC: How do The Hills and Group of Seven connect in your head?
GOVANI: Oh gawd, don’t ask me to go any deeper. It’s like giving a testament. (He laughs) I’m always looking for a weird juxtaposition…this book is a comedy of manners. I get a particular kick out of mentioning Kim Kardashian on one page and Rita Hayworth on the next. I love that. In both situations they will have their followers – their tribes – I see the snobbery in both and I appreciate both.

SDTC: Is this what distinguishes you from most gossip columnists?
GOVANI: I think it’s my saving grace. I can make the connection between The Hills and The Portrait of a Lady because even though the mediums are different the themes never change. It’s always about ambition, egos…appetites…love and wanting to be validated. Even though the word “frenemy” is new it doesn’t mean that frenemies are new.

SDTC: We want to know – what’s the most extravagant, over-the-top big bash you’ve ever attended in Toronto?
GOVANI: There was a party last summer for Alex Shnaider, a Russian-Canadian steel magnet, his wife threw him a 40th birthday party in an airport hanger. There were two planes stationed right outside and in the middle of the party guests got in and took off. I believe they flew back to Russia. There was also Russia’s answer to Coldplay and Gloria Gaynor.

SDTC: Okay – so like, have you ever been to a party where there was an elephant in the room, literally?
GOVANI: Elephant – oh that’s so done.

SDTC: What celebrity run-in is dominating your dinner party banter?
GOVANI: Recently, it’s definitely the Tom Ford saga at the Toronto Film Festival where he asked if I was trying to smell him.

SDTC: What about a really weird mixed bag? We love those!
GOVANI: I was at a party talking to Malcolm Gladwell – trying to get to the bottom line of The Tipping Point and Martha Stewart interrupted to tell him she was his biggest fan. Something like that gives me an infinite kick. I love it when a certain celebrity – that you aren’t expecting – is cow towing to another celebrity and both of them are such different vintages.

SDTC: Who is the scariest celebrity?
GOVANI: You would not want to end up in a broken elevator with Shirley MacLain.

SDTC: There must be someone that intimidates you…
GOVANI: If I ever met Martin Amis, my more than average smarts in most rooms would go out the window.

SDTC: How do you keep up with all the buzz? What’s your routine?
GOVANI: I just do. In the morning or very late night, I go to Page Six (New York Post), that’s my holy grail. I read Cindy Adams, and Nikki Finke out of Hollywood – who knows the behind-the-scenes industry stuff. I’m obsessed with The New York Observer, The Daily Beast and I listen to all the Fresh Air Podcasts, which I get a weird amount of gossip from. I’m the guy who would never subscribe to Vanity Fair because it would stress me out that it would come to my house after the newsstand. It’s a really happy day when I happen to be in the US and grab a Vanity Fair three or four days before it arrives in Canada.

SDTC: So you’ve been a Vanity Fair die-hard for a long time.
GOVANI: I remember when they put Joan Collins on the cover. That wasn’t recently.

SDTC: Are you ever concerned about slandering or offending someone?
GOVANI: No – I got over that a long time ago. I take solace that I have pretty good instincts and my instincts have been honed after years of doing it.

SDTC: Are you ever miserably bored at an event?
GOVANI: When you are at a party – you have to be enjoying yourself whether you are or not because people pick up on that and that effects the temperature around you. It’s like method acting.

SDTC: How do you work the room at a party to ensure you get the goods?
GOVANI: It’s usually a two-pronged approach – and depends on how tired I am, or how much I’m willing to “work”. If it’s something important and I know it’s a one-off, I’ll be super prepared. I’ll have out of left field questions to ask or I’ll have an angle and I’m just looking for the quotes to fill out the angle. Having said that, I also depend a lot on the power of serendipity.

SDTC: In the book you refer to “Incomprehensible Social Critters”, who are they?
GOVANI: They come in many varieties, but it is the person who insists on being out all the time but doesn’t really seem like they are having a particularly good time. Someone told them to “network” or they told themselves that they needed to get out there but they spend most of their time complaining or being negative. It still astounds me.

SDTC: Those things are a godsend. Now, most importantly, have you ever wanted to tug Susur Lee’s ponytail? (Oh what…this isn’t out of left field, Susur obviously makes his way into Boldface Names)
GOVANI: More than once. I’m always disappointed on the rare occasion when I’ve seen him without the ponytail – it seems wrong like Anna Wintour without the bob.

SDTC: Is there anything else you’d like to share?
GOVANI: I’m officially off brunch. You can tell everybody! I think it’s an absurd meal. It brings out the worst in people and the worst people. More importantly, brunch always has the sub-par ingredients and the leftover food from the rest of the week. None of the real chefs like to work brunch. The thing is too, when you go to brunch – by the time its over, Sunday is over, the weekend is over and Amazing Race has started. It ruins the weekend and is a bad punctuation through and through.