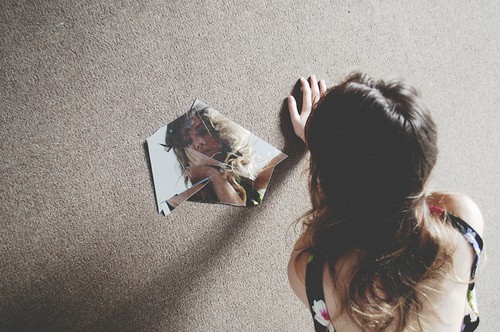 Why I Returned To My Abuser

Last year, a friend snooped through my iPad while I was in the shower.

By the time I caught him with my tablet, he had already pulled up the messages.

They were incriminating; including a racy picture of handcuffs that I had sent to my ex. But there were other photos too; one of a gorgeous blue dress that usually hangs in my closet. My ex had photographed it months earlier and sent it as part of an intimate explanation of a dream he had that night. There were the messages I sent to him, saying; “I miss you already”.

When I caught my friend in the act of invading my privacy, I was sick with anxiety.

I knew right away what he had been looking for. Records of time-stamped phone logs, long chains of inside jokes; the evidence of lovers lamenting their time apart. I had hidden this tryst because the man behind the messages beat me up so bad that I ended up in the emergency room of St. Michael’s Hospital.

The violence was so shocking that I immediately questioned whether it even happened at all. What was steady and unquestionable though, was the sudden void and aching loneliness that came with an unexpected break up.

Ours was a clichéd love story. I was messy, sweaty and stopping at Starbucks during a morning jog for coffee beans. He jumped in his car, caught up with me to say hello. “Are you an actress?” he asked me. I laughed. I was so surprised and flattered by that question. Mousy, awkward me, came across an actress. This stranger seemed to be making all kinds of assumptions about me that I liked. A smart, cultured and career-focused city woman. I loved the role! It was irresistible to walk away from, so I didn’t. I gave this handsome lawyer my phone number and so began the relationship.

Our first date involved an over-priced restaurant, where a serving team of four young women swooned over him. He ordered for us and when our first glasses of chardonnay arrived, he leaned in and took my hand, holding it for the remainder of the night. I was grateful. Not for the affection, but because the twenty year age difference between us showed. I was self-conscious about what we looked like from the outside. So I made every effort to believe that what we had was real, that the judgmental gazes were wrong.

It was New Year’s Eve. And while Toronto welcomed the New Year, I was hiding in the bushes. My ankles were bleeding, and I was bent over picking cotton fluffs out of an open wound. I don’t know how many times I attempted to get out of his house that night. Maybe it was the third time that I actually escaped. I had made it to Spadina Avenue. He pulled up beside me, in the same manner as he had done the morning we first met.

The same SUV slowed down beside me. This time, his soft eyes were raging. This drunk man, the one who had been my lover, my confidant, and my cheerleader, demanded that I return.

I can’t remember exactly how I responded. “What are you doing? You’re drunk!” “You’re going to kill someone!” Maybe those were the words. I do know what I was thinking moments before I tasted my own blood. I was worrying that he would be arrested for driving drunk, that he would go to the jail and lose his livelihood. I was worried about him.

I didn’t expect anyone who loved me to understand why I continued to speak to him. I once tried to explain why I missed him and found myself in tears while my friends scolded me in a busy downtown restaurant. “If he did it once, he’ll do it again,” they said. I left our table humiliated and enraged. I was being lectured about leaving a relationship that I had already left.

My friends and family didn’t believe that this was an isolated incident of violence. To this day, I don’t know if I believe that either. Were there signs that I had completely missed? I began to feel like I would never again be trusted to make good decisions. Even though I had escaped a night of violence and ended the relationship, nobody seemed to acknowledge that part.

I frustrated people in my world by not being angry enough, not hating him, and it often felt like the only person who understood me, was him. He and I had a secret. I knew he did this awful thing. He knew I was sneaking around to be in touch with him. This collusion kept us together for longer than I like to admit. Had I stopped to consider that my e-mails and text messages would be scrutinized and exposed even more, the prospect of pressing charges would have been out of the question.

It took me three months to stop talking to him. Six months to get him out of my head.

In the background was the Jian Ghomeshi saga.

What I knew in my bones was that taking on my ex, the powerful man I loved and dated, would not have ended well. I believed that it would be an ugly and difficult experience that would keep me connected to someone who would be increasingly angry at me, and essentially obligated to fight me. I wasn’t strong enough, and the best possible outcome (a guilty charge) did absolutely nothing to entice me.

The Ghomeshi verdict was no surprise, but it was painful nonetheless. I feel ashamed of what I’m going to say next.

The verdict made me feel vindicated.

It’s an awful, shameful conclusion to draw, but it’s real.