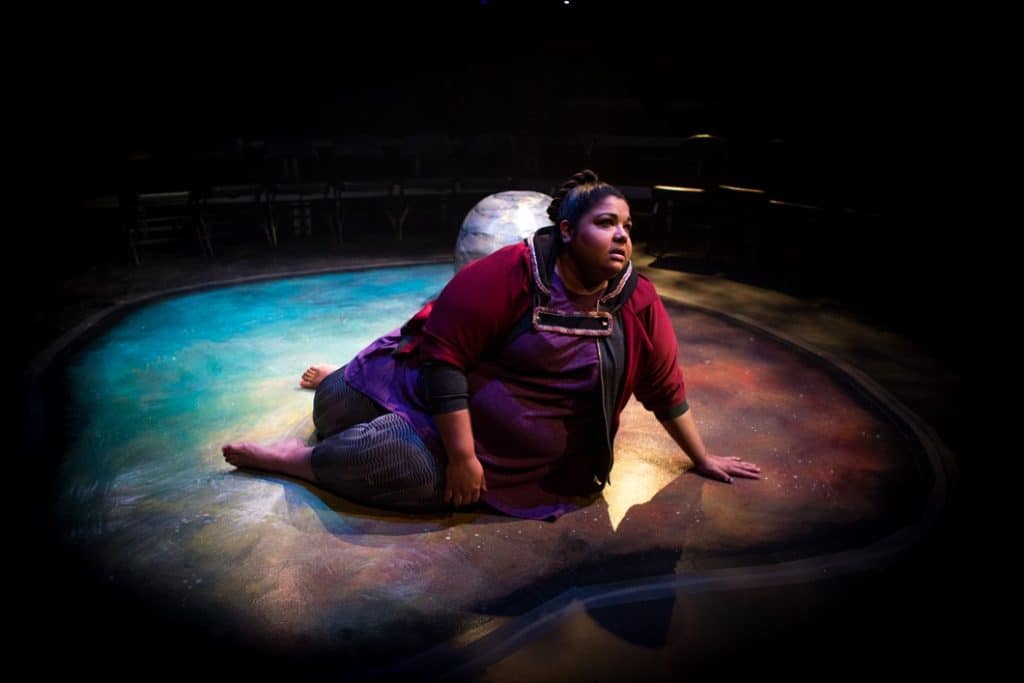 Now based in Tkarón:to, Yolanda Bonnell is a Queer, 2-Spirit Ojibwe/South Asian performer, playwright and poet from Fort William First Nation in Thunder Bay, ON. We’ve been huge fans of Bonnell’s since we first saw her in bug, the groundbreaking play that she wrote and performs in. Now, bug is returning to the stage this February 7-22 at Theatre Passe Muraille (16 Ryerson).

We asked her about what we can expect.

SDTC: What has transpired in your life since you first wrote bug? How have those experiences played into the current iteration of the performance?

YB: Oh wow—so much. Because I started writing it in theatre school and it’s been six years since then—it’s safe to say A LOT. A larger more impactful event would be the cultural work I’ve done on myself in moving forward with my reclamation of my Indigenous artistic voice. Being Indigenous, growing up on a reservation and being incredibly colonized makes for a complicated relationship with one’s cultural identity and voice. Once I learned what I wanted to say about the world and who I wanted to create for (Indigenous women, non-binary and 2-Spirit folks), it shifted the way in which I created. So I would say it definitely impacted not only the story of bug, but who we brought on board, how we interacted with presenters, our engagement and outreach to communities and of course, starting manidoons collective. All of this to get it to where it is now.

I’ve also survived cancer in my uterus leading to a full hysterectomy, experienced rural Ontario racism for the first time, institutional racism in theatre (I should have expected it), and have done an incredible amount of work on educating myself in ways that I wasn’t able to before. I’ve also had wonderful opportunities to work with and learn from so many incredible Indigenous women. And being an Indigenous woman, writing this story about Indigenous women—it definitely had an impact on the writing and edits that were being made along the way and you know—performing motherhood. It also greatly effected how the show begins—the opening has changed nearly every single time. It took me some time to sit down and ask myself: ‘OK, what do I actually want to say? How do I really want this story to begin?’ And eventually, I found my way to the answer: colonialism. This story has to start there.

Why do you think this show continues to resonate in 2020? What are you hearing from audiences after the performance?

I think this show continues to resonate because the government continues to inflict genocidal tactics on Indigenous people all across Turtle Island. It continues to resonate because Indigenous women are still being targeted and are still being murdered and going missing at an alarming rate. Because the number of Indigenous children in the foster care system continues to be high. I could keep going. The point is, all of the themes that are touched on in bug are still happening. The government’s failure to provide resources for communities keeps Indigenous people in a cycle of coping with trauma. And we see the consequences of that play out in the piece.
People find themselves in this story. Even non Indigenous audience members—many people feel abandoned, or have addictions, or come from other marginalized communities, settler parents who adopt Indigenous kids. The story shows realities and hard truths that a lot of people seem to relate to.

What made you want to include a Q&A after the performance? What do people tend to have questions about?

It was important to me that we collectively debrief. This show can be difficult for folks to watch or be a part of and I want to acknowledge that truth. For me, it’s less about ‘what do people think of the show?’ and more ‘hey, let’s talk about what you just saw or how you might be feeling’. We have traditional healers present at every show to ensure the safety of our witnesses, but I also wanted to have a collective conversation.

People usually ask about how the story was written, what inspired it, a lot of people ask about the movement and poetry if they’ve never seen that kind of storytelling before, where I came up with the idea… oftentimes there will be an Auntie in the room who immediately is like “Are you OK?? What do you do to make sure you’re OK?!” They’re very concerned! Depending on the audience, I also get some problematic comments from older white folks, which is always tricky to navigate.

What is your favourite part of performing this work? Least fave?

My favorite part is—well I have a lot, but I love our first days back into rehearsal. Just like getting it back in my body, being with the team and inviting those ancestors back into the process. I also just love the point in the performance where the nerves melt away and I just tell the story and play with the audience in the circle.

My least favorite (funny enough) also happens usually on the first day when I read the script out loud for the first time. Every time I do it, I have to rip myself open to let these voices, these people inside. It’s always a little triggering that first read, diving back into this world. Also, the sore muscles aren’t great!

Can you give us any hints as to what will be added/different about this latest version?

I think I kind of dropped it earlier, but definitely the opening. The last time we did this here was at Luminato and we’ve had a few other stops since then, where Cole and I were like ‘yeah. This is our opening. This is it.’ Also, keep an eye out for information on the storytelling workshops that I’m offering alongside this run. I’ll be facilitating workshops for Indigenous youth and workshops for Indigenous women.

Get your tickets for bug here.