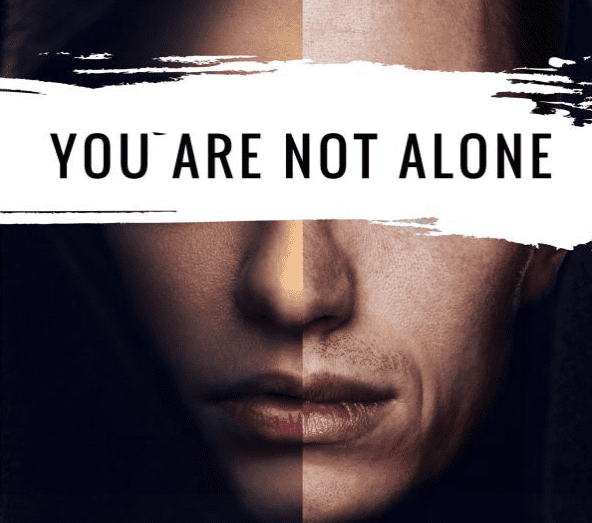 You Are Not Alone: Fifty-Six Survivors Break Their Silence About Sexual Abuse

One of the most pernicious aspects of sexual abuse is keeping it secret. In the HBO documentary, Leaving Neverland, James Safechuck spoke of the alleged sexual abuse he suffered at the hands of Michael Jackson. The torment was able to continue because he carefully hid what Jackson did to him. “Secrets,” he said, “will eat you up.”

In You Are Not Alone, a new book by Jyssica Schwartz, we hear the stories of fifty-six men and women who have decided to come forward and share their experiences in order to break that silence. The oldest is seventy-two, the youngest is fourteen. In coming forward, many of them managed to find a way to start healing.

“I believe the more we speak about difficult topics, the less difficult they are to talk about,” says Schwartz. “The stories are in their own words and proved to be an incredibly cathartic process for everyone involved.”

We asked Schwartz about the book this week.

SDTC: Of all of the survivors’ stories you heard, which stands out to you the most, and why?

JS: Out of fifty-six stories, they genuinely all stood out. Each person had a unique and terrible experience. One that stood out was a young woman who escaped from the Amish community after being abused and whose abuser was eventually brought to justice. Others were the horrors of family members committing sexual abuse, people who stood by and let it happen, and the ones who did not get justice.

A few that stood out were men who contributed stories. I think it’s incredibly brave of the men who come forward. This does not only happen to women, but men are significantly less likely to report it, so it was important to me that their stories were included.

What was a common thread that is woven throughout these stories?

As terrible and scary as many of the stories are, the common thread is hope, bravery, and survival. Each contributor was brave enough to share their personal story, their darkest moments, in order to show others how they survived, how they moved forward in life, and their hopes for the #MeToo movement and the future. These survivors are so much more than victims: they are surviving and brave and powerful enough to give a movement a voice.

What is your personal connection to this issue?

I’ve been followed and assaulted, groped, catcalled, and all of that. It’s funny, when I was younger, I barely thought about those instances. It wasn’t until I was older that I realized some of the situations I’d been in.

At a party in college, I left to walk home and a guy I thought was a friend followed me and grabbed me. He tried to kiss me and wanted me to let him into my apartment. I said no and tried to walk away and he said I’d been flirting with him and “wouldn’t have worn that” if I didn’t want him. I was able to get into my home alone, but it was scary and there was no one else around.

But it’s not about my story, my connection. I just felt that as someone with a platform and the capability to put together this kind of project, it was important to do so. I want to be a fighter for people who need one—a listening ear, anything people need to heal and thrive.

Why is it so important for you for these stories to get out in the open?

When the #MeToo movement started in October 2017, I was not shocked by how many people I knew who were responding and part of it. I was horrified and saddened, but not shocked. At the time, I had a small platform, a few thousand followers of my blog, and I’d self-published my first book a few months before. I had this realization that I had a platform and the ability to do something like this—to shine a spotlight on people who maybe felt like they didn’t get a voice to share their experiences.

From the bottom of my soul, I believe that the more we talk about difficult or “taboo” subjects, the more people are ABLE to talk about them. I just wanted to do something to be a part of helping people, and I know from experience that writing is often cathartic and healing and leads to beautiful things.

What are ways we can help prevent abuse going forward?

I personally think one major way we can combat these instances is by teaching children from a very young age about consent and body autonomy. That it’s okay to not hug or kiss people if you don’t want to, even if it is a family member or family friend. That their comfort level is more important than necessarily doing something because an adult says to.

I also think we need harsher punishment on abusers in the justice system. We need to stop questioning or victim-blaming and just believe people who say this has happened. I know that some people say, “Well, what about the false reports?” Of course, falsely accusing someone of rape is horrific and should not happen, but nationally only 2% of all sexual assault accusations reported to the police turn out to be false, which is the same rate of false reporting for other violent crimes, such as murder. But we don’t have a stigma attached to accusing people of murder. Abusers should be punished like every other criminal.

I believe that we need to stop adopting the “it’s not my business” mindset. You hear about how neighbours and family or friends knew abuse was happening but they didn’t want to say anything. Maybe they fear retaliation? Maybe they want to mind their own business? We have to be willing to help the people who need it the most.

How have you found healing in the aftermath of trauma?

For me, writing has always been my healing path. I write out emotions, situations, traumas, everything.

The reason I think You Are Not Alone is so important is because it has helped so many of the contributors start to heal. Many of them have never told anyone what happened to them, but they felt safe enough to write their story for this book. Writing is cathartic and allows us to sort through our emotions and our pain. And the readers are now getting to see [or even relate to] something they either have not read before. They know for absolute sure that they are not alone and that they can come out the other side and be okay. And I think that’s important.