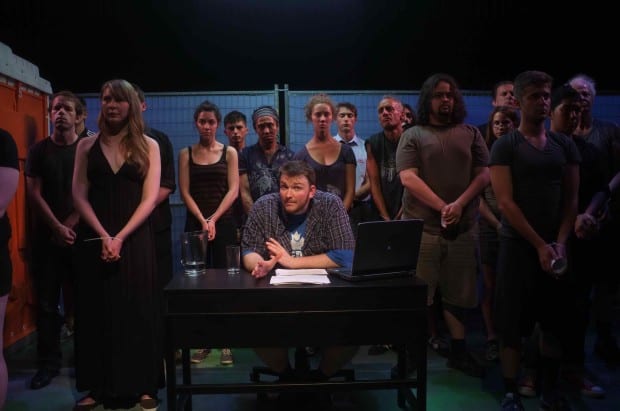 "Tommy Taylor’s play took us through a very personal account, an almost hour-by-hour countdown, of his horrible experience at the hands of the state after becoming one of the 1,000 people arrested that weekend. After being released, Tommy didn’t sleep for days."

You Should Have Stayed Home: Tommy Taylor Takes Prima Through Being a 2010 G20 Detainee

Detainees refused food and water for hours at a time; cops from Pickering, Toronto and Barrie, all confused and not sure of what to do with over 1,000 people; more than $1.4M spent on security; a public inquiry into the largest mass arrest in Canada’s history; hundreds held inside a cramped cage for more than 24 hours. Tommy Taylor takes audiences across Canada into what it was like as a detainee during the 2010 G20 Summit in Toronto in his 2013 Canadian tour of the popular play ‘You Should Have Stayed Home: A G20 Romp’ produced by Praxis Theatre.

I’ll admit, I was skeptical; I remember being there myself. I was lucky enough to evade riot-geared police during that hot day in the summer of 2010. I also remember being angry–I was angry at the police for arresting my friends; I was angry that I had been siphoned off at every street (like Tommy, I wasn’t allowed to go home when I wanted to); I remember thinking all cops are pigs and wishing I had the guts to smash those bank machines and throw flaming shit through the window of the American Apparel on Yonge Street. I was angry; I remember wanting to be heard, just like my fellow protestors. I remember they were all quite peaceful. And even the ones that weren’t, let them be. They had a point, we all did. None of us were wrong, all of us were angry.

Tommy Taylor’s play took us through a very personal account, an almost hour-by-hour countdown, of his horrible experience at the hands of the state after becoming one of the 1,000 people arrested that weekend. After being released, Tommy didn’t sleep for days and wrote a Facebook note of over 30,000 words recounting his experience. Of course, as one would expect in a modern fairytale, the note went viral and Tommy received messages and comments of support and solidarity from across the nation and across the globe.

The play had riveting moments, during which surges of anger came to me in full force, while during other moments I was on the verge of tears. My main reservation going into the production was that it  might create a dichotomy between police officers and protestors, presenting one group as human and the other as inhumane. Of this, I found the play unfortunately guilty. While I strongly believe that the police who ‘followed orders’ to use unnecessary force during the G20 riots were very much in the wrong, it is foolish to create a black and white ideal that relieves one group of the duty of their own humanity and morality. To call one group of people pigs, to hate them intensely, and to push them back and punish them is to fight in a war of symbols, wherein one group takes on the attributes of an overarching system of repression and oppression and begins to stand for the symbol itself. Neither one person, nor one group of people can wholly represent the system that the protestors opposed. It is my opinion that to fight the system is not to bring your heart into combat with those who maintain the system as individuals, but rather to create a new system that operates outside the paradigms of the oppressors’ understandings.

You Should Have Stayed Home has captivated audiences across Canada, recounting the tale of injustice Tommy Taylor and his fellows encountered. The directors, writers, actors and producers of this play have been provided an amazing opportunity to present new ideas of existence and resistance and have instead relied on pointing the finger.

Watch the play and draw your own conclusions: this G20 romp hits Ottawa next for a November 20th – 23rd run.