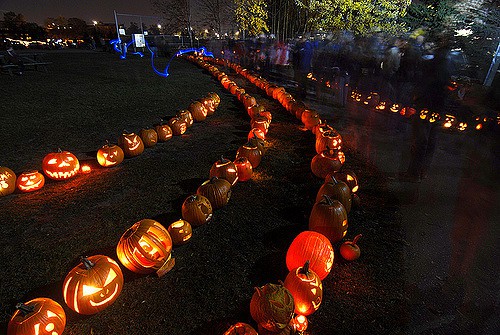 Your Guide To Pumpkin Parades Across Toronto

Did you know that Toronto basically INVENTED the pumpkin parade?

The first Pumpkin Parade was held in Sorauren Park in 2004 and it is now a Toronto tradition; parades are hosted in parks across the city from Terraview Park in Scarborough to Centennial Park in Etobicoke. Our brilliant idea has also spread to other cities, including Montreal and New York City.

We love the tradition of giving your jack-o-lantern a dignified send-off, so why not display your masterpiece before it’s ravaged by the local raccoon population?

Thirty-four parks across Toronto will glow orange on November 1st as neighbourhoods bid a final farewell to their jack-o-lanterns with a community Pumpkin Parade. Use the map below to find the pumpkin parade nearest you, or suit up and see them all. Happy Halloween!