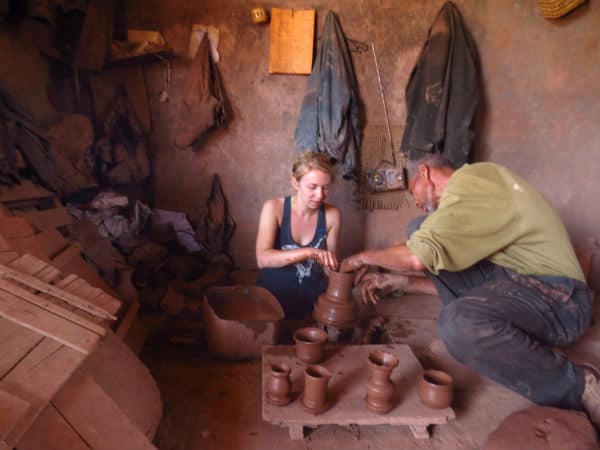 "The leader of the pack took command, handed me a lump of clay and indicated I should imitate what the kid beside me was doing. Namely, hurling the wet mass on the ground repeatedly."

Of all the places I’ve been so far this year, the country that I am asked about most is Morocco, where my goal was to learn pottery.  It’s an amazing country and I was lucky to see all sides of it–even if, less fortunately, I experienced some of the less attractive aspects (see: being a blond-haired, blue-eyed Westerner on the receiving end of a lot of street harassment, despite my best efforts to not attract attention.  But that’s another story altogether.)

I had done some research on how I might go about “doing pottery,” as I so vaguely described my plan prior to arriving in the country, but never really nailed anything down. Thank goodness I had my uber-connected tour leader Mo to hook me up with an authentic experience I definitely couldn’t have facilitated on my own.

One Saturday morning, the tour had officially ended. Mo and I grabbed a taxi and drove out to industrial Marrakech so I could invade the workspace of some local tradesmen. Mo was starting another tour that afternoon, so he made arrangements for the cabbie to pick me up in about an hour’s time, said a quick goodbye, and then there I was: alone a building made of scrap metal with a hard packed dirt floor and a crew of Moroccan workmen looking at me like, “Who brought the blonde chick?” and making me second-guess if this “authentic experience” was worth it. I felt so voyeuristic.  And given my afore-mentioned brush with street harassment, I was a little nervous about being left on my own so far off the tourist path. As far as I could tell, I was the only female in the near vicinity.

But before I could dwell on that too much, the leader of the pack took command, handed me a lump of clay and indicated I should imitate what the kid beside me was doing. Namely, hurling the wet mass on the ground repeatedly. Once that was sufficiently done, I started kneading this mound with my feet, and then on my knees with my hands to get the air bubbles out. 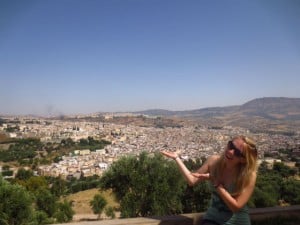 Lemme tell ya, that shit is hard work.

After that was taken care of, my guide took me for a tour around the compound explaining to me the process of making tiles, shingles, pots, etc.  At this point I’d like to mention that no one there spoke English. We were dealing strictly in French and Berber, and despite my eleven years of French instruction, I remain pitifully anglophone.  But hey, we got by!

After my tour of the workspace, I was able to get my hands (and pants, and shirt, and everything else) dirty. Dude directed me to a hole in the ground where I was to continually spin a wheel with my right foot so as to keep the clay mound in front of me moving and workable. I was shown a lot of different techniques and learned how the tiniest movement can change an object into something entirely different (hello, metaphor!).  I managed to churn out a lot of lumpy, lopsided jars and vases, but suffice it to say, I am not good at pottery. At least, not after one day in the throwing seat.

But while I didn’t come away from that day a potting master, the whole thing was so much more than I could’ve hoped for. By the time I left, all the men in the workshop had gone from ignoring me to encouraging me and applauding my clumsy attempts at handicraft. Finally, my taxi came to pick me up and as I said my thank yous and goodbyes we parted like old friends with promises to come back and visit next time I was in Marrakech.