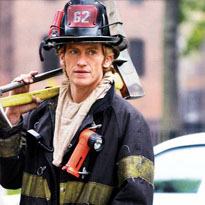 It’s midnight and I’m lying in bed mesmerized by the sexy gap between Denis Leary’s teeth. He jumps NYC rooftops rescuing smoky children and caps the night off with a lap dance and tall whisky – neat. Rescue Me is a show made for flag waving Americans featuring post 9/11 NYFD who break from measuring the girth of their cocks to talk to the ghosts of burnt colleagues. For the libidinous female, American or not, this show offers a blue collar fantasy which includes, but is not limited to, ripping off Leary’s uniform and sucking in the sweaty smell of his blonde chest hair.

As credits roll, I take one last glance at a recently tagged photo on Facebook, undecided as to whether it should stay or go. Eh…I close the laptop and flick my contacts to the floor. A stormy night, I draw the curtains to watch the rainstorm, pretending that my curvy street of Victorian homes is actually the jungle. A quick swallow of Benadryl and I drift off against the booming thunder and violent, yet soothing, rain. I move from Dundas West into Coppola’s Apocalypse Now, eager to see what dreams await.

BEEP*BEEP*BEEP, I arise panicked to the sounds of a reversing truck. Shit – the organic bin. Flying into a half hazard pajama get up – I rush downstairs to dump forgotten cherry tomatoes into a green bag. Opening the door at 8AM, I am greeted with package number one. Hoorah! Sitting on my stoop is a cooler full of nutritional meals for the next two days; courtesy of Nutrition in Motion Ltd (Note to self to cancel dinner plans). What a delight! I had forgotten my commitment to try out, and review, this decadent to-the-door meal service. My usual organic yoghurt and Dorset crunch is swapped for a River Omelet; eggs, turkey bacon, low-fat cheddar cheese, mushrooms, green onions, tomatoes and olives (total Calories: 221).

Typically, I walk the Pomeranian to Starbucks for my morning brew – the only destination that he doesn’t bark incessantly at while I jolt in for a minute. However, at the Metro on Sunday night I made a conscientious decision to instead try out Kicking Horse Coffee, swapping the $4/day on Grande Bold for $15/bag of Kickass Organic Coffee beans. I’m curious to see how long the bag sustains me. Perhaps it was the pleasant phone exchange I had with the Kicking Horse rep in BC or maybe the recent review of Sleeping Naked is Green – but something tipped me to purchase the high quality pick-me-up.

A hasty walk around the block, with mug in one hand and leash/iPhone in the other and I was quickly met with major obstacle #1: wrangling someone’s tossed Genoa Salami from my dog’s chops. EVERY FUCKING DAY it’s something else. Although my bratty, but beloved, pet ‘graduated’ from Mother Knows Best, he still insists on being extraordinarily disobedient when it comes to finding snotty tissues, chicken wings, Tim Horton bags or Pizza Pizza crusts on our morning ritual. My continual battle with incomprehensible litter adds two points for Aurora and another strike for downtown living.

A few quick e-mails and I tear up to Yonge and Eglinton for a press screening of The Girlfriend Experience. En route I flick the radio stations sixty eight times – and finally find solace in blaring out Coldplay’s Viva La Vida. If I were to wed again, as cheesy as it may be, this would be my first dance. Although, maybe it’s a bit quick footed and I would have torn the Vera Wang in half exposing my nude tone CK thong. Hmm. (Speaking of Vera Wang – it’s sitting pretty in my closet – if you are interested let me know)

Running late for the screening, I tear past all the depressing morning smokers flicking butts outside Druxy’s while clamouring at my H&M cheerleader skirt, trying to prevent the dirty gusts of wind from exposing my juvenile knickers.

Into the screening I give a wink to Richard Crouse and kick up my heels ready to watch mid-morning erotica. I won’t divulge too much but let’s just say La Perla makes an appearance in several dubious situations where a young, lost?, depressed? beautiful girl undresses for deflated brokers on Wall Street. Without a doubt, they are more consumed with the collapse of the market than the erection of her nipples.

Film done, and feeling oddly aroused at an unusual hour, I head back to the car but am blocked but what seems like six hundred high school students boarding the Mandarin buffet restaurant. Forced to find an alternate route to the parking lot, I climb the darkest, dankest garage stairwell in Toronto. With each step closer to the top I am sure it will be my last. Holding my breath, through concentrated urine and disease, my heart races knowing my dangerous lack in self defense.

Tearing back down Avenue I land on 102.1 and listen to the Smashing Pumpkins 1979. *SIGH* Can’t help but think of my approaching thirtieth birthday and wonder what life is like on the other side.

Lessons learned in the past twelve hours: a gap between front teeth turns me on, people who toss salami on the sidewalk are intolerable, I’m a jerk for not having dry cleaned my wedding gown, fancy lingerie isn’t worth the $500 blow job, and it’s always better to combat the Mandarin mob head on then opt to solo climb a scary rape staircase.