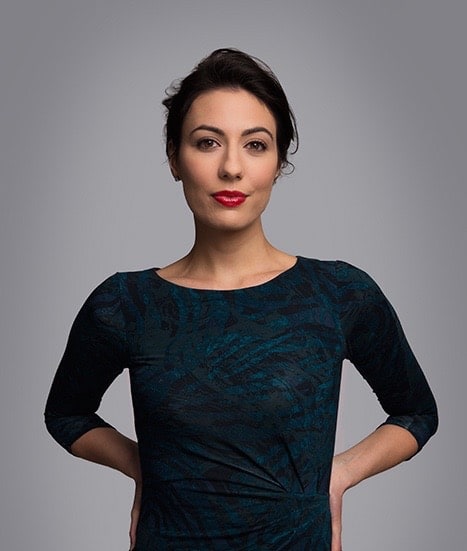 Premiering at the Toronto International Short Film Festival on November 11 is Busy Bee, a story of two old friends colliding at distinctly different phases in their lives. Friendship, womanhood, connection, values and truth are explored in this short narrative.

We had a chance to speak to the writer, producer and star of the film, Chandra Michaels, indeed a Busy Bee IRL! Michaels is a writer, producer, actress, life coach and all around film enthusiast. After studying Theater and obtaining an Honours B.A with a major in Drama at the University of Toronto, she went on to appear in various films and episodic shows for CBS, CW, Global, CTV, CBC and Disney.

Michaels collaborated with husband Myke Bakich on Busy Bee and is committed to producing and advocating films with strong female driven content.

What first got you really interested in producing and writing?

A combination of things. I love the medium of cinema and how powerful and profound its effects can be. Writing and producing film is an extension of my love for exploring the human experience. Creative liberation was a major motivation; I was tired and frustrated of just waiting for the audition. A big part of writing and producing films was inspired by my dream of being a leading actress, taking my career into my own hands and doing something about the idleness I was feeling. I also felt passionate about wanting to contribute to writing and creating more dynamic roles for women in film. Creatively collaborating in film with my husband Myke Bakich had also been a long time dream of mine.

I hope to inspire other women to take charge of their creative careers, write and create their own stories, step into the roles they want be and play, and follow their dreams.

What are three goals for yourself that are on your mind at this very moment?

I actually have four on my mind right now:

Where are your favourite places to hang out in Toronto?

That I travel around the city a lot, hitting up various cafes and health food stores to buy natural supplements and products.

A movie producer and director, an archaeologist and a blood doctor.

What meal brings you immense pleasure?

I feel immensely nourished after eating Indian food. I love tacos, preferably hard shelled. French toast and crepes made by my husband. A bowl of homemade soup or chili.

My husband’s love, support and humour, my cat and his dynamic personality, celebrations, playing the ukulele and singing while my husband plays the guitar, travel (Paris, Maui, California), beaches, oceans, sunshine, nature walks, fall foliage, fine roasted coffee and espresso, all things pumpkin spice, creating, writing morning pages, auditioning, being in the studio with my acting coach, uplifting others, witty repartee and double entendres, coming up with rhyming one-line jingles, laughing so hard I cry, dancing (especially to early 00s hip hop and r&b), doing interpretive dance to the opening theme songs of television shows, 1920s-30s jazz music and fashion, crystals, fresh lavender, small dogs, animals, babies and children, manis and pedis with my mom, red lipstick, flowers, Kundalini yoga, and when mine and my husband families get together. Also, deep conversations about life, spirituality, acting, relationships and love.

Negative energy. The sound of sawing and drilling. Jackass stunts.

LoPo. It stands for Love and Positivity. It’s my mantra and sign off. I believe in the spreading of LoPo and that the world can benefit from more of it.

When I’m relaxed, having fun, passionate, inspired and following what lights me up. When I open my eyes in the morning and recall my dreams. When I’m writing my morning pages or after writing them when all that mind clutter is cleared, after a meditation or really great Kundalini yoga class, conversing with my husband over coffee, listening to emotional music, when a midnight burst of energy comes over me like a sort of midnight madness. When in nature, walking the streets of Toronto, people watching on park benches or travelling abroad. It inspires ideas, reflections, connects me to insights, expanded awareness and different perspectives.

Give us your best pitch for Busy Bee.

Busy Bee is the story of two old friends colliding at distinctly different phases in their lives. Friendship, womanhood, connection, values and truth are explored. It’s about a pleasant run-in with an old friend quickly turning into an emotional rollercoaster. Colette (my character) struggles with whether to hang on or let go of her friend Lisa, a queen bee who’s just too busy.

Check out the world premiere of Busy Bee at the Toronto International Short Film Festival on November 11, 7:45pm at the Carlton Cinema and support women in film!