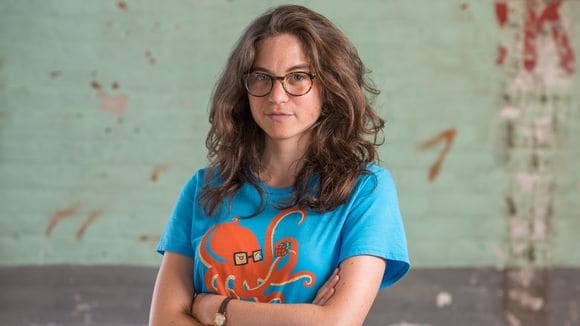 15 Minutes With Wendy Zukerman & The ‘Science Vs’ Team

Science Vs is a no holds barred podcast that takes on fads, trends, and the opinionated mob to find out what’s fact, what’s not, and what’s somewhere in between. The Science Vs crew are in town this weekend for the Hot Docs Podcast Festival (November 18–20) at the Hot Docs Ted Rogers Cinema (506 Bloor St. W). We chatted with host Wendy Zukerman and the rest of the team to find out what we should be paying more attention to, and which science myths need to die already.

Facts. Evidence behind people’s claims. And scientists. (Science Vs team)

Work hard, be kind, and amazing things will happen. Advice from my PhD advisor who got it from Conan O’Brien. (Diane Wu, producer)

So many things! Probably fifty things per episode at least. The best, most shocking one is the punchline of our G-Spot episode. Listen to it! (Shruti Ravindran, producer)

Reading a small pile of papers involving the exact chemical composition of the gases billowing out of semi-buried pig remains. (Shruti Ravindran, producer)

Having an enlarged diagram of a clitoris on my monitor at work for a few weeks while researching for our G-Spot episode. (Wendy Zukerman, host and producer)

I don’t have Netflix. But I did just binge-watch Atlanta. So many things to love: Donald Glover in the lead, a hilarious rapper named Paper Boi, his scene-stealing sidekick Darius, and a black Justin Bieber. And probably the best prison scene I’ve seen on TV in recent memory. (Shruti Ravindran, producer)

I like the charger from Amazon that can charge both your AA and AAA batteries. My favorite batteries are the Sony Eneloop ones. I bought my first set in 2008 and they still work. (Diane Wu, producer)

The team just watched a video of chubby mice on a treadmill scored to the Chariots of Fire theme song. (Diane Wu, producer)

Men and Women of Australia!: Our Greatest Modern Speeches – edited by Michael Fullilove, because ideas that inspire nations are the business. Also, The Girls by Emma Cline – a beautiful fictional take on the Manson family. And my original Donkey Kong handheld video game that Dad engraved with my name so my brothers and I wouldn’t fight over whose game was whose. (Kaitlyn Sawrey, senior producer)

iLok key for ProTools – the audio editing software that we use. Although, I hesitate to call it a purse. More of a wallet, really. #askhermore (Kaitlyn Sawrey, senior producer)

There are so many! That’s why we love making Science Vs. But here’s a few: the idea that there is a clear line between what is “natural” and “artificial” is a myth that marketers love to exploit. The notion that women and men’s brains are so different that it would hinder their capacity to do equal work – that myth has to die! And, of course, the myth that climate change isn’t real – it is. And we need to be dealing with it. (Wendy Zukerman, host and producer)

Paul Rudd. I remember seeing him on that staircase in Clueless, and my heart bounded out of my chest. Those eyes. That hair. (Wendy Zukerman, host and producer)

Batman in the 1966 film. Adam West is tall, has a great voice, wears a campy outfit – vintage Batman is the best Batman. (Kaitlyn Sawrey, senior producer)

What are you most excited to see/do in Toronto?

We’re excited to hit the food markets, drink some beers, head to the Royal Ontario Museum – and just ride around enjoying the city. (Science Vs team)