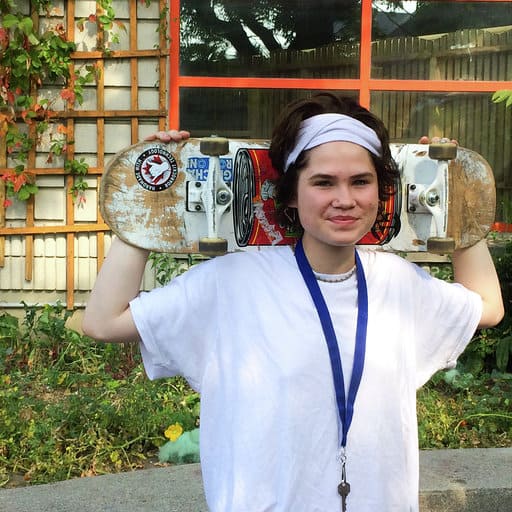 This week, we chatted with Judge about the doc.

SDTC: What was behind your choice to focus on 17-year-olds?

MJ: I choose to focus on 17-year-old girls because it’s a transformative year for them. They are on the cusp of becoming women, and it’s their final year of high school, when they are looking ahead and making difficult choices that will impact their futures.

I filmed over the course of the school year in order to witness the personal challenges and growth of the girls as they faced challenges that were often beyond their control. We watch elite athlete Kiki under pressure to compete for a basketball scholarship so her parents can afford to send both her and her twin brother, who is not a high performer, to college. Meanwhile, another subject, Mich, is living alone, estranged from her mother, looking for ‘home’, and coming to terms with her own sexuality. And the third girl, Audrey, is desperate to get a leg up as a woman in the computer programming world through admission to an Ivy League school.

How did you come across Audrey, Mich & Kiki? What about them stood out to you and made you want to feature them in this doc?

We interviewed approximately a hundred 17-year-old girls from diverse backgrounds. Many of them were fun, adventuresome and highly intelligent, and it was difficult to narrow down the selection. However, I find once I “cast” one of the subjects, it’s always easier to find the other people for the film. You know what you have and what you still need to make the film sing. I found Audrey first, and it was through connections at her school. I really wanted a high academic achiever in the mix because I felt she would bring a focused, hardworking and cerebral dynamic to the mix. As it turned out, all the girls are high performers, although in the case of Mich, she learns in a radically different manner than most students, and a lot of her talent lies in the visual arts. She was studying at Oasis Skateboard Factory, an alternative school.

I was also interested in filming an American because, when I began the project, Hillary Clinton had just lost the U.S. election and misogyny was rearing its ugly head. I felt an American might have a strong, emotionally articulated view on gender politics in the aftermath of the election. As it turned out, #MeToo exploded across North America. I was also interested in featuring Kiki because she was a female basketball player, a very male-dominated sport.

Whose story resonated with you the most?

Have you been in touch with them since the doc?

I have stayed in close touch with the three girls and their families. They are all doing well. Mich decided to study animal care rather than going to art school. It means she can be with animals and make a living doing work she loves. Audrey is at the University of Waterloo studying Computer Programming and loving it. She’s a skilled organizer and is helping head up the University’s Hack-A-Thon this year. And Kiki is at Florida Tech University, studying Bio Medical Sciences as her lead up to medical school, while travelling around the country on the varsity girls’ basketball team bus.

What were their thoughts about seeing their experience on-screen?

Audrey and Kiki haven’t seen the film yet. I’m looking forward to showing it to them before the public screening. And Mich doesn’t want a preview screening. She’s waiting to see the film when it screens with an audience. She told me she wants to see it at the same time as everyone else.

What do you remember about what it was like to be 17-years-old?

When I was 17, I was not nearly as savvy as these young women. Of course, initially, I thought I was; I felt like I was on top of the world. But then the world rushes in, and you start to run up against obstacles and new emotions, and you realize there are vast pockets of knowledge you know nothing about. I was 17 when I moved away from home to go to university. It was a very lonely and shocking experience. What I love about Kiki, Mich and Audrey is they are not easily shocked, and when they run up against obstacles or have a devastating experience, like Mich being sexually assaulted, we see them steadfastly regain their footing with dignity.

I hope 17 and Life Doesn’t Wait entertains while it sparks a dialogue around the changing roles and values for women, and how teen girls, as they grow into adults, can best deal with the conflicting expectations and values in society.