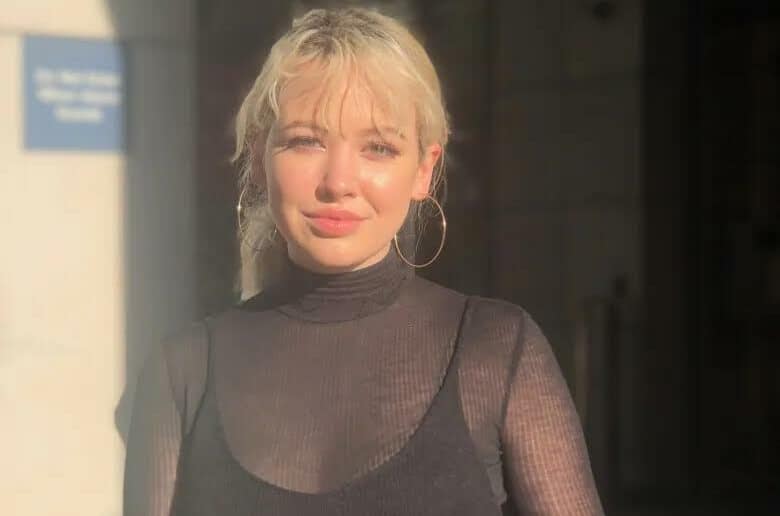 "I don’t shy away from saying and writing exactly what I believe, and that’s an ability I couldn’t have developed without activism."
Life Stories

We’re not saying don’t go to journalism school, but there are other ways to establish your writing career—Rayne Fisher-Quann has proven that blazing an unconventional path can also land you a dream job.

At 19, Rayne is the youngest editor we’ve met, but her experience is interesting and impressive.

In 2018, while in high school in Toronto, Rayne organized the student-led March for Our Education protest, in response to Doug Ford’s nonsensical and harmful decision to repeal sex education content, as well as the PC’s abominable decision to cancel a proposed Indigenous-focused curriculum. Rayne later initiated the #WeTheStudentsDoNotConsent social media campaign with fellow student and activist Indygo Arscott from Decolonize Our Schools, which allowed thousands of kids to advocate for an updated curriculum.

Her courage, determination, and savvy ways were noticed by fellow organizers and Rayne was asked to be a speaker at the 2019 Toronto Women’s March as well as a keynote at UNICEF Canada’s youth activism summit.

One of the people to take note of Rayne’s talent and ingenuity was Michael Hollett, who recently launched NEXT Magazine after selling NOW Magazine, which he founded in 1981, to Media Central Corp. Inc. The new free monthly covering the music, arts and food scene intends to enlighten the older demographic of magazine readers on current arts and culture trends while also enticing the younger generation with print media.

It’s a big two-fold goal that bridges the expansive gap between younger Baby Boomers and Gen Z. But Rayne is well equipped to take on the challenge, and has already secured a cover that featured TikTok sensation Ashnikko.

Shedoesthecity readers span from millennials to Gen X, so beyond admiring her career trajectory and gutsy instincts we were curious to connect with Rayne to get her take on the future of media in Canada—being born in 2001, she brings a totally different perspective.

What are the three greatest lessons you’ve learned through organizing / activism that have helped lead you get to where you are today?

The most important thing that organizing has taught me is that there is nothing more important than your value system. For my whole life, I’ve been told that I have to make myself quieter or less radical or more “respectable” in order to get anywhere, but organizing has taught me that there’s no point in being successful if you have to give up your convictions to do so. I am where I am today because I don’t shy away from saying and writing exactly what I believe, and that’s an ability I couldn’t have developed without activism.

Activism also instilled in me the idea that there are few things more valuable than compassion and community and that everything you do should be in service of those two things. I make it a priority in my professional life to write in a way that is kind, compassionate, and directly serves marginalized communities as much as possible, and I wouldn’t want to be writing at all if I couldn’t do those things.

You’ve grown up in the age of digital media / social media – and bring a very different perspective to journalism than older generations. In short, where do you think the future of journalism in Canada is going? What does it look like?

I think journalism has been in the process of democratization for a long time, but that process is reaching critical mass. Traditionally, journalism has been an elitist, nepotistic industry — legacy families and high-cost education have ruled supreme — but as information is increasingly accessible and normal people have the ability to build their own platforms, anyone can be a journalist. Some of my favourite music journalists are teenagers on TikTok, and I learn far more from them than I do on Pitchfork. And people are now able to tell their own stories via social media. I think we’re going to be seeing a far more diverse, far more on-the-ground version of journalism coming our way, and it’s a much-needed revolution.

What stories are you most interested in covering for NEXT?

I’m most interested in covering the artists, events, and cultural moments that most other news sources won’t. There’s nothing I value more than being able to shed light upon marginalized artists and underground communities through my writing — I think that’s probably the ultimate goal of my journalism as a whole.

What philosophy has been guiding your journey recently?

Everything I do should be in service of my community and the causes I believe in. I’ve been reminding myself to fight against careerism and the desire for external success and focus on my value system and the people I love.

What social media accounts do you get a ton of inspiration from?

Creatively, I’m inspired by @tinyjewishgirl, @maryretta and @visiblejune. They each do something so unique and intimately personal with their craft and I’m very inspired by people who have been able to carve out niches that are entirely their own. Vibe-wise, I draw inspiration from Ivy Wolk’s TikTok, @angelmammii7, and children’s toy review channels. I just think they’re cool.

If you look back on this past year, where have you been finding joy? What’s been helping you get through pandemic life?

I’m super lucky that I live with people I love and enjoy being around — I know a lot of people don’t have that privilege!! The pandemic has certainly been hard, but I’ve found a lot of value in it. Being sort of cut off from the world has given me the chance to really try to figure out who I am internally and get my priorities straight without a lot of outside influence. I literally started the pandemic by dropping out of university and now I get to do what I love all the time, so it’s been working for me so far.

If you could have a day, or weekend, post-Covid, where there were no social distancing rules, or fear of the pandemic, what would you do? What would your dream Saturday look like?

I think I would stand on a city sidewalk and start kissing strangers on the mouth. And I’d throw a theme party. There’s basically nothing I love more than throwing elaborate theme parties and I’ve been missing it more than ever recently. I’ve been brainstorming this party idea where every person at the party has to dress up as a campy version of another person who’s at the party. That’s the dream for me — to be able to throw over-the-top parties again (I’m a Leo).

Follow Rayne on Instagram at @RayneIncorporated, and check out her latest work by heading to NEXT Magazine.

"I don’t shy away from saying and writing exactly what I believe, and that’s an ability I couldn’t have developed without activism."

What you need to land a job in 2023, from resume tips to interview prep