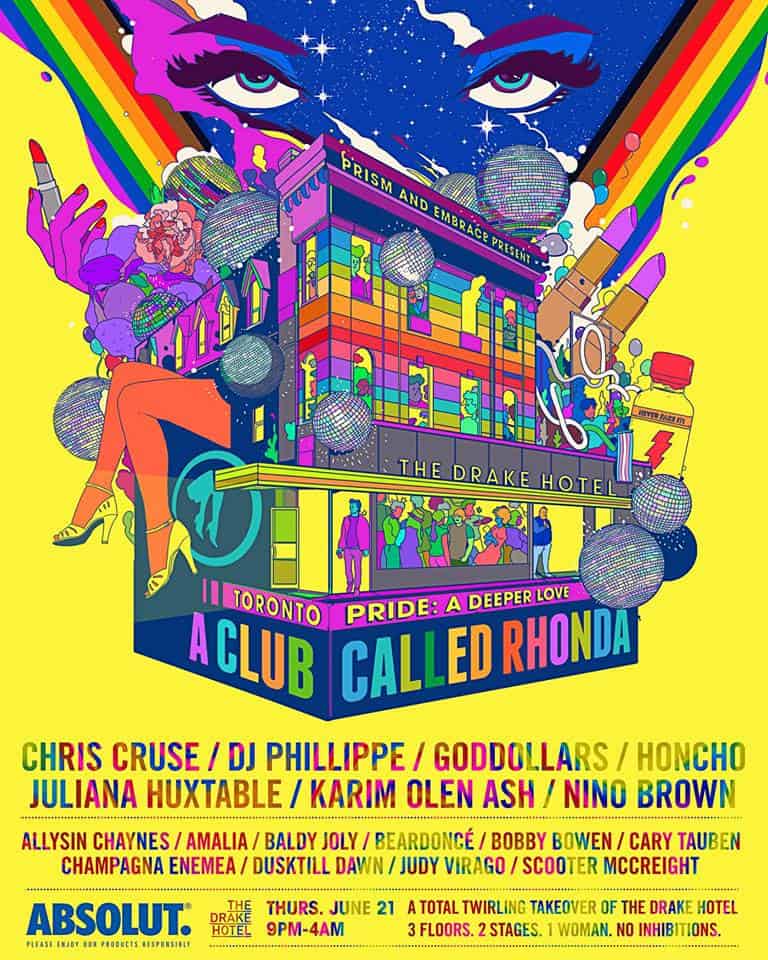 Happy Pride! Here are the parties and events you won’t want to miss this week.

9 pm A Club Called Rhonda @ The Drake Hotel, 1150 Queen St. W. Los Angeles’s pansexual party palace returns to Toronto for a #TOP2BOTTOM total towering takeover of the Drake Hotel. From the raucous carousing of the open-air rooftop and the titillating techno of the ground-floor discotheque to the bountiful body music of the boisterous basement and the effervescent Absolut Unicorns galloping about, you’ll be making your wide-eyed way through a wigged-out wonderland with hundreds of the most beautiful creatures in Toronto. $30 advance tickets available online.

10 pm L’Uggs @ The Beaver, 1192 Queen St. W. DJ Marilyn Mansion is getting really, really, kinda way too comfortable, someone should say something, but whatever, work it, and bring a bag of chips! Housey techno-ish weird stuff.

5 pm Pride Opening Night featuring Kehlani @ Yonge-Dundas Stage, 1 Dundas St. E. Get out to this star-studded situation and kick off your rainbow-covered weekend right! This free show will include some fab hosts, queens, performers, DJs, and a live performance by Kehlani. Until 11 pm.

5 pm One World @ Barbara Hall Park, 519 Church St. One World, one love, one epic party–what more could you ask for? Carl Craig serving you his unique blend of techno, jazz, and sci-fi vibes; Saeed Younan showing you why he’s a globe-trotting sensation; and Deko-ze hitting the decks with his country-famous house beats. Until midnight. Free admission (donations for The 519 are welcome and appreciated).

6 pm Alternaqueer @ South Stage, Church & Gould St. Think beyond boxes and labels and rethink what it means to be queer. With hosts House of Filth and performances by their hand-picked cast of misfits, including hardcore/electro/dub band Above Top Secret, Montreal’s neo-soul kawaii hip-hop duo Hua Li, and trans Iranian rap superstar Säye Skye. Until 2 am.

7 pm Trans March @ Intersection of Church and Hayden St. Toronto’s Trans March is officially one of the largest, most exciting Pride events in the world–not only for the trans and non-binary folks, friends, and allies who rally and march together in solidarity but also for anyone who witnesses this landmark event. Trans women of colour and people with different abilities are encouraged to lead the march.

8 pm Night at the Aqueerium @ Ripley’s Aquarium, 288 Bremner Blvd. Your vibrant, deep-sea adventure awaits with an evening of music featuring DJs Cozmic Cat and Lucie Tic, drag queens Boa and Juiceboxx, refreshments, and a photo booth that will have you feeling like a true sea star. $40 advance tickets available online.

10 pm Scream: Monster Mash @ The Beaver, 1192 Queen St. W. Indulge in your darker side as Scream celebrates all monsters this Pride! DJ Patrick Von Ghostwolf will keep the beats dark and mood sexy so you live on this dance floor. Performances by Jacklynne Hyde, Seyoncé and Rubi Strange. $5 before midnight, $10 after.

1 pm Dyke March @ Intersection of Church and Hayden St. A political demonstration of critical mass, welcoming all self-identified dykes to create political and visible space, and to celebrate the power, strength, diversity and passion of dyke experiences and identities. Post-march rally in Allan Gardens featuring performances, crafting and even more dyke-community building.

2 pm Yohomo @ Pride South Stage, Church & Gould St. Yohomo is bringing some of their very favourite DJs and Kweens from the city to the main stage! Expect feel-good sets and vibes throughout the day and bouncier club feels after the sun goes down, including Vivacious making her Toronto debut with a death droppable ’90s house DJ set. Until 1 am.

2:30 pm Queer Logic: Pride Edition @ The Beaver, 1192 Queen St. W. An outdoor afternoon mixer and dance party. Come trip through the ethereal, meet someone new, eat some fresh fruit, and vibe out to selections that embody the warmth of summer–everything from reggaeton, dream house, baile, global dance, ambient, rusted out techno tools, and records that honour the enduring legacies of queer dance floors. Until 9 pm.

8 pm Dirty Disco @ Wellesley Stage, 15 Wellesley St. This isn’t just a night of disco balls and Soul Train line dances–it’s a deep-house music moment with DJs Nigel Best, Chiclet, Miz Megs, Ticky Ty, Toronto’s infamous Robb G, the legendary Deko-ze, and the self-proclaimed “bringer of chaos,” DJ Jelo. If you need a serious night of dancing under the stars and need to get down and dirty, this is the spot. Until 2 am.

10 pm Hey Girl Hey @ The Baby G, 1608 Dundas St. W. Get ready for multiple floorshows featuring hostess with the mostess, Beardoncé, the incandescent splendour that is Bonbon Bontemps, and the sacrilicious HGH debut of their holiness, Gay Jesus + DJ Orange Pekoe spinning all-female hip-hop/R&B (’90s to now) and 4 am last call at Hey Girl Hey’s Pride celebration. $10 in advance, $15 at the door.

2 pm 38th Annual Pride Parade @ Intersection of Bloor and Church Streets. Stand loud and proud with more than 120 groups marching in Toronto’s Pride Parade, one of the largest in North America. This is the weekend’s premier event, bursting with performances, floats, marchers with messages, queens, kings, outstanding community groups, and more glitter than you can shake a disco stick at.

2 pm Pride Final Play Featuring Brandy @ Yonge-Dundas Stage, 1 Dundas St. E. End your Pride weekend with a big bang! Head to Yonge-Dundas Square after the Pride Parade for an evening of DJs, singers, dancers, and a special live performance by Brandy. Until 11 pm.