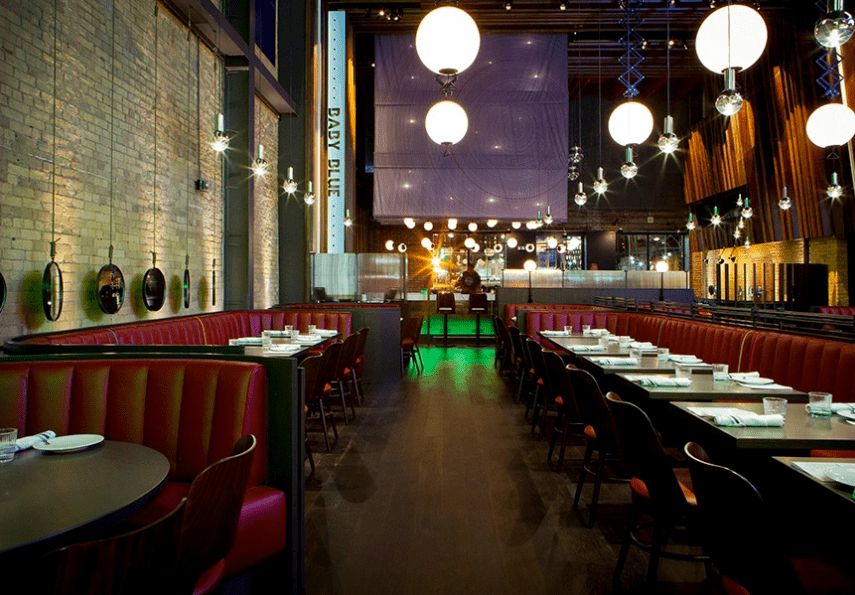 5 Fabulous Places to Have Drinks on Queen St East

I grew up in the South East end of Toronto, so when you say to me, “Let’s go out for drinks on Queen Street!” I automatically think Queen East, not Queen West. I’m not actively against Queen West or anything like that, but I do feel like the eastern end of Queen Street never seems to get its due.

So here I am, singing its praises like a proud stage mom on a reality show. I firmly believe the nightlife on Queen East is just as diverse and equally interesting as its western counterparts. Stop rolling your eyes, West Enders! I can feel you doing it through the ether of the Interwebs, but I am here to tell you, it’s time to give east a chance. To get you started I have compiled a list of five great establishments for everyone’s consideration, regardless of the direction from which you hail.

For Going Out With Fancy Banker Types: The Carbon Bar at 99 Queen Street East

If you’re going out with rich-os who’ve paid off their student debts and have disposable income, The Carbon Bar is probably the most appropriate place on the Queen East strip. Impossibly hip, It has a bit of a Warehouse vibe with concrete walls and super high ceilings decorated in eye-catching fixtures like neon signs. For bonus points, this space used to be the home of MuchMusic’s beloved live dance television series Electric Circus. Torontonians old enough to have watched this show (which was cancelled in 2003) will totally get a kick out of the novelty. Think how far you’ve come! Remember when you were the teenager who used to hunker down in your parents’ basement to watch the bright lights of Electric Circus on TV each weekend, living vicariously through its super cool dancers? Well, now you can DRINK there! Going to The Carbon Bar is basically a chance to make a teenage dream come true.

If you get hungry from all the MuchMusic nostalgia, you can also sample some of their gourmet barbeque (the pork tacos are particularly succulent) and their dessert menu boasts an EXQUISITE banana and toffee pie. Their drinks menu is also nothing to sneeze at, featuring everything from fancy bottles of sparkling wine to signature cocktails, such as the tobacco infused Smokin’ Manhattan. Less pretentious drinkers can even treat themselves to a bottle of Budweiser beer. All in all, there is something for everyone.

For Socialists Who Are Super Serious About Cocktails: The Comrade at 758 Queen Street East

The Comrade is a communist-themed bar that is serious about making unique and masterfully done cocktails. From the street, the dark windows and small space look pretty low-key and unremarkable. When you enter, however, you’ll realize the only thing that’s low-key is the vibe. The cream-coloured exposed brick walls complement the dark wood bar in just the right way. The place is also decorated with communis propaganda posters. It’s the kind of space that manages to be different without trying too hard. Basically, The Comrade achieves the near impossible feat of being authentically, effortlessly cool. If it were a person, this space would be a charismatic leader who manages to turn their charm into a lucrative dictatorship.

Many East Enders’ personal solution to the Cheers bar, the staff at The Comrade are renowned for their friendliness, as well as their skill making probably the best cocktails in Toronto. If you’re feeling hungry, you can snack on kimchi, pulled pork or Asian slaw. The Drinks Menu, however, is the real star of this establishment. On my visits, I’ve had everything from a perfectly executed white wine sangria to an Earl Grey infused cocktail. I’ve also been told their Dark and Stormy may have healing properties. In addition, if you’re into rare Bourbons such as Buffalo Trace, the proprietors of this establishment are collectors of some of the best in obscure booze. This is the place for you!

It’s a place with a vibe I call hipster-light. Its tin ceilings and checkered floors are en trend without hitting you over the head with edginess. In the summer time, they also open their garage door-style window so you can people watch and catch the breeze. There is lots of seating, but the place is so popular there are often lines anyway, so my advice is to book ahead if you can.

If your friends are committed to exploring the best in gourmet bar food, they will love you for taking them here. It boasts such delicious delicacies as duck fat tater tots, macaroni and cheese in truffle oil, as well as nachos with foie gras. Their drinks list is also nothing to sneeze at either. They make a kickass Sidecar with ginger compote as well as a solid London Fog. For those more into beer, they have Moosehead Lager, Cracked Canoe Light, Guinness, Grolsch and more on tap.

People Who Love an Old School Pub and a Patio: Murphy’s Law at 1702 Queen Street East

We Canadians really like to suck all the marrow out of summer, and even most of the autumn. If there’s no snow on the ground, some of us will sit on a patio for days. Conveniently then, this traditional Irish pub offers a large rooftop patio decorated with colourful flowers. It’s a perfect place to order a cold one and sit back for a relaxing evening of drinks with friends or family. Inside, Murphy’s Law looks like it could literally have been transplanted from Dublin. Its non-fussy décor is charming and traditional, full of dark wood furniture, dark wood floors and dark wood paneling. As an extra bonus, the servers wear Kilts!

As for the menu, you can indulge in comfort food like an Irish lamb stew or some fish and chips with cream ale batter. For drinks, they have a generous selection of beers on tap, including Sam Adams, Guinness, Kilkenny, Stella and Mill Street Organic. If beer isn’t your thing, their cocktail list is also fairly long, offering such festive fare as Mojitos, Margaritas and Red Wine Sangria.

Boots and Bourbon is still a relatively new kid on the Queen East strip, but it’s already made an impression. They feature live music every weekend that will make country fans VERY happy. There’s even line dancing. Seriously. The place boasts comfy booths, a horse head on the wall and even a mechanical bull! So, yeah, it’s definitely not your typical bar in downtown Toronto. If you want to bypass lineups, you can also make reservations for dinner or order a bottle. They also do private functions, and honestly, I kind of hope some of my engaged friends take advantage of that and plan their wedding there. Wouldn’t that be different? I’ll wear cowboy boots over high heels any day of the week!

As for the food, you can order such treats as a bloomin’ onion. If you haven’t had one of those yet, you are frankly missing out on all that life has to offer. Turning to drinks, you can get everything from a Coors Light to an honest-to-goodness bottle of fancy Veuve Clicquot champagne. You should also consider trying a cocktail called Grandma’s Texas Lemonade, which involves Tito’s Vodka, blue curacao, salty vanilla and lemon peach. It tastes so good you’ll be hollering for another in no time!

The Big Social: Host or attend a virtual food event in support of Community Food Centres Canada Posted on October 21, 2020