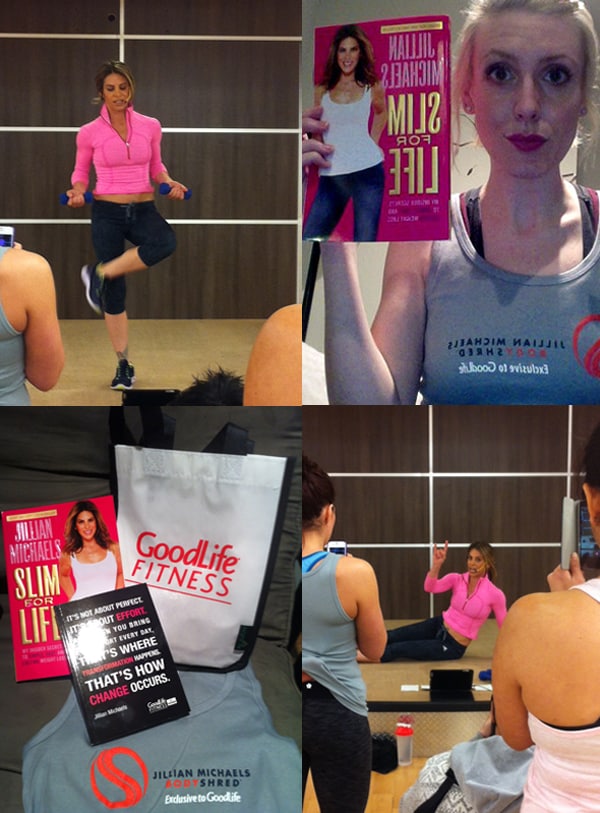 Celebrity trainer Jillian Michaels came to Toronto yesterday to promote her JILLIAN MICHAELS BODYSHRED™ class, which is offered exclusively at GoodLife Fitness. She Does The City was invited to attend the event, and being a huge fan of her work, I was pretty excited to get the chance to workout with someone who clearly knows her stuff. Having said that, I would like to start off by stating: there is a workout… and then there is Jillian Michaels work out. You’ll understand what I mean as you read on.

Being the nerdy keener that I am, I was one of the first people in line and therefore at the front of the class (this would later come back to kick me in the ass). When I entered the fitness room, my main concern was getting a good spot to get my paparazzi on and to make sure that I could hear and see her well while she gave the JILLIAN MICHAELS BODYSHRED™ demo.

Her class consists of sequences, three minutes of strength training, two minutes of cardio, and one minute of abs, which are then repeated three or four times over the course of what became the most exhilarating and fastest-paced 30 minutes of my life.

Here’s what I learned from working out with Jillian Michaels:

1. Michaels has got it going on. Michaels animatedly sauntered onto the stage with confidence and a killer body. Her hair was perfectly coiffed and her muscles perfectly popped. Michaels had a giant smile that made you feel comfortable and delivered inspiring mantras that made you feel confident. As an added bonus, Michaels is funny. She used a dry sense of humour to make sure everyone was paying attention to the demo and that no one did the opposite of what she very specifically outlined (think of Chelsea Handler instructing an intense fitness class).

2. If you can’t take the heat, don’t stand at the front of the class (in the direct eyeline of Michaels). Remember how I said that being a keener and standing at the front of the class would come back to kick me in the ass? Oh, in the ass it did kick. At one point during the class, my body took over and was like, “gurl, you need a break.” I was losing fuel and my pace slowed down. Michaels could smell my inevitable failure and looked me straight in the eye and said, “Don’t stop. I will kill you if you stop.” After peeing ever so slightly in my pants,I kicked my knees up as high as they would go, my bod infused with a new burst of stamina and energy (like a “fear of death” induced adrenalin rush).

3. Feed off of the energy in the room. When the class gets intense (it will, I assure you), take a quick look around the room, at all of the people pushing themselves to successfully finish each rep. You will adopt the mentality of, “if they can do it, I can do it” and you will push yourself to finish one circuit and transition into the next. Although the workout is intense and Michaels expects the most out of you, there is a very positive vibe in the room. The up-tempo pop/techno tunes don’t hurt either.

4. Listen to your body, but don’t stop. There is a reason that there are no breaks or “cool down” periods. When you let your body rest, even for a nanosecond, it will want to crash. It reminded me of when I was a waitress back in university and I would work many a double shift. The worst part of those shifts was getting back up on your feet after a break, because teasing your feet with relaxation would only make them retaliate with pain and burning as you got up to finish the second half of your shift. This class was much of the same. At one point, it got too intense and I needed to slow down. I didn’t stop, but I did make a couple modifications to the routine (and hid behind a pillar so that Michaels couldn’t see me).

5. You will feel AMAZING after the workout. After the burning in my lungs subsided and my face de-flushed, I felt super accomplished and confident. I didn’t give up, I didn’t pass out, and I didn’t shed a single tear. I was actually kind of amazed at what my body was capable of.  I may or may not have walked around my apartment in a sports bra and booty shorts, casually checking out my bod, as I was convinced it looked 10 times leaner than it had prior to the workout.

GOOD NEWS: If you live in Canada, you can get your sweat on with JILLIAN MICHAELS’ BODYSHRED™ too! If you’re looking for a fun, intense workout for all fitness levels, check out the GoodLife Fitness Website for class times and prices. We can’t wait for the next one!

Aaaand, congratulations to our lucky winner, Kathleen Hickey, who joined us for the class, and got to work out with Jillian Michaels too!

Disclosure: Although this post has been generously sponsored by GoodLife Fitness, the opinions and language are all my own, and in no way do they reflect GoodLife Fitness.