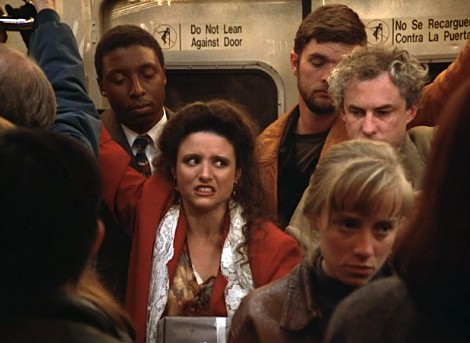 Twice every Monday to Friday, I take one subway line to the other and then hop on a bus to get to and from work. I live midtown-ish, so a one-way trip to the office in Scarborough takes about one and one-half hours, on an average day. I can easily measure the length of my commute in playlists and book chapters and Sudoku puzzles. In other words, I spend a lot of my time riding the TTC beast.

At least, enough time to consider myself somewhat of an expert in elbowing past backpackers, weaving through the stroller brigade, and cozying up to manspreaders. Coupled with someone’s foreign, delicious-smelling dinner and a boombox with shitty speakers, it’s enough to make you want to give up and join the ranks of rodents that live under the tracks. Instead, here are five ways to improve your commute and keep cucumber-cool in transit.

Runny nose? Don’t bother with a tissue. Or deodorant for that matter. Pull together an outfit from your grandmother’s old trunk, and don’t worry, that funky musty smell can only help repulse passengers. If you feel like farting, now would be a good time to do so. Basically, if you can clear out a subway car, you’ve succeeded. The problem with this technique is that most transit riders don’t care about your appearance and will sidle up to you in any state — a seat is a seat, and we’re all sardined in solidarity. Or, worse, you might run into that cute guy from the gym.

A jam-packed train or gridlocked highway is especially stressful for someone like me who has always wrestled with social anxiety. I’m sometimes guilty of letting it best me and turn me into an indefensible grump. The best remedy is to think about anything else — read a book, crank those earbuds, pick up a soggy Metro crossword — with the intention of taking your mind out of this underground tunnel.

Another way I like to distract myself is to make up long histories and affairs and adventures for fellow commuters. It started as a game between me and my roommate in college, when we used to get stoned before heading to campus for a lecture or, you know, some other less incriminating activity. That couple on the streetcar might be kissing each other goodbye for the last time or that old man that looked kind of like a zombie might actually be a zombie who’s just trying to make sense of our living world. I wonder about them, and if they wonder about me.

There is nothing like exposing yourself to strange germs that will boost your immune system. Think of it as the TTC’s own influenza vaccine, or those chicken-pox parties parents throw on purpose for their kids.

Delays are inevitable. So it’s a no-brainer: factoring in no less than a transit apocalypse lets you just go with the flow. You’ll be totally zen when those crackling, tinny voices begin to spew bad news from the intercom because you woke up 15 minutes earlier (or skipped the makeup routine like I usually do). It helps if you can master a napping technique for your trip that lets you guard your purse at the same time. (Mine is a combination of muscle memory and sleeping with my mouth open.)

Sure, peace is isolation and mental exile on public transportation, but crowds are unavoidable. I was in the far back of a bus during rush hour this week when a toddler in a red snowsuit resembling the size and shape of a puffy fire hydrant was having a hard time waddling to the door, where his mom was waiting. So the throng of riders all guided this kid through the aisle, him flanked on either side by alien hands taking turns to help. It looked like some weird pagan ritualistic offering or passage. I was seized by the collective spirit of these total strangers, and like to recall it when I’m feeling anxious or grouchy. It may have been a small gesture but I don’t easily dismiss instances of humanity and kindness, as rare as they are on public transportation.